This a very strange and frankly ugly at least for me pistol. I have only see it once. When I was much younger.
It seemed to work for the owner and he had a fairly good pattern with it. But I was told that it is extremely hard to find ammo for it now a days. Frankly I was NOt impressed by it then or now.
Here is some more information below about this false start of a Semi Auto Pistol.
I hope that you like this.

This pistol is one of the most simple of blow-back semi-automatic pistols ever designed. The lockwork is essentially that of an elementary single action revolver. While technically listed as a ‘hesitation’ lock because of a delaying cam which has some theoretical tendency to slow down the opening of the breech, in actual practice it functions as an unlocked pistol.[1]
According to the Steyr factory records this arm, patented in 1898, was originally introduced as the “Model 1900” and used a special 8 mm cartridge.
When introduced commercially in 1901 it was chambered for a special straight-case cartridge listed in Austria as “7.63 mm Mannlicher”, designated in Germany as “7.65 mm Mannlicher” (Note: There is also another 7.65 mm Mannlincher cartridge, M.1903, similar to 7.65 mm Borchard), and described in the U.S. as “7.65 x 21 mm”. The Mannlicher “straight sided” cartridge actually has a straight taper to help in extraction.
The cartridge for this pistol was manufactured in Europe until the beginning of WWII. The cartridge has a bullet weighing approx. 85 grains (5.5 g) which may be steel or cupro-nickel jacketed. The powder charge varies with the type of powder used, the European standard being about 3.5 grains (227 mg) of DWM standard powder, producing a muzzle velocity in the neighborhood of 1070 ft/s (326 m/s).
While this is a cartridge of considerable power to use in a blow-back action, the pistol design itself is so sturdy that the arm has given satisfaction through the years.
The firing chamber in this design is part of the receiver proper. The magazine is housed in the grip and is loaded with a clip through the top of the open action. Because of the extremely simple lock work employed, the pistol has a minimum bulk for an arm of its type.[1]

The moving breechblock of this pistol was designed as a slide with two rails extending forward beneath the stationary receiver/barrel where they are connected by a cross beam which is also part of the single breechblock forging. The barrelis screwed into the chamber section of the receiver and has a front sight top rib which is part of the barrel forging.
A spiral recoil spring is positioned horizontally, directly below the barrel between the parallel guides of the receiver and rails of the breechblock. An illustration of this spring is shown in the drawing from page 216, Mannlicher Rifles and Pistols, Smith, 1947. When the pistol is discharged, as the breechblock moves to the rear and the slide rails travel back in the receiver guides, the cross-beam at the forward end serves to compress the recoil spring against the frame. 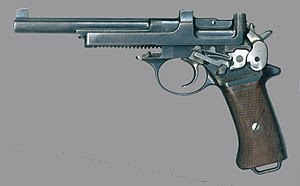 The lockwork is incorporated on the left side of the frame where it is covered by a removable side cover housing of unusual design, being wrapped around at the forward end and serving also as a cover of the recoil spring. An illustration of this cover is shown in the drawing from page 218,.[2] This cover is installed on the frame from the front and is retained buy a spring catch forward of the trigger-guard.
The trigger is connected on the left side of the frame to a trigger bar which, as the trigger is pulled, moves rearward pushing against the sear tail which is under the control of the V-spring that serves as both trigger and sear springs. The sear nose engages in a notch in the left fork of the hammer (the hammer is external) to provide a fine trigger pull which is very unusual in an automatic pistol.
Mounted on the frame under the right portion of the side cover housing is the mainspring, a heavy V-spring. Its greater arm (lower) engages a notch in the right fork of the hammer to drive it forward when released by the sear. Its lesser arm (upper) continuously presses a cam upward that engages a slot in the under surface of the breechblock slide when the action is closed.[1] 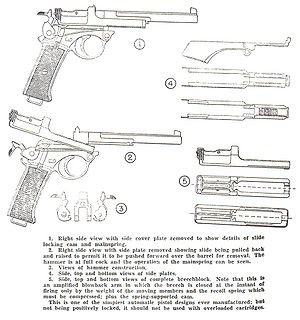 To load the pistol grasp the breechblock on the serrated gripping surfaces on the sides and pull the machine straight to the rear. The magazine follower rises to hold the action open while the cross beam at the forward end of the slide compresses the recoil spring. Insert a loaded stripper clip into the clip guide in the face of the breech block and then strip the cartridges into the magazine, compressing the spring below the follower. An illustration of this process is shown in the drawing from page 214, Mannlicher Rifles and Pistols, Smith, 1947. The spring lip at the top of the magazine serves to hold the cartridges. The cam on the right side of the frame, being forced up by the lesser arm of the mainspring, pushes the cam into the slot in the under surface of the breechblock slide and holds the machine back as explained above.[1]
Because of this cam hold-open, the pistol does not close when the clip is removed. However, drawing back slightly on the breechblock will ride it over the cam, and releasing it will permit the recoil spring to close the action.
As the breechblock goes forward, the extractor mounted in the top of the block will snap over the extracting groove of the cartridge as it is chambered.[1]

Movement of the trigger linked to the trigger bar releases the sear from the hammer notch. The compressed arm of the mainspring, pushes against the hammer notch, rotating the hammer on its axis to strike the firing pin, discharging the cartridge.
The breechblock starts back at the instant of discharge, carrying the empty cartridge case with assistance of the extractor. The empty cartridge case is brought sharply against the ejector which is a bar at the back of the magazine. The underside of the breechblock is slotted to travel over the ejector.
The recoiling slide riding over the hammer causes the hammer to rotate on its axis, locking the sear in the notch of the left hammer fork.
The magazine spring forces the next cartridge up into line. At the apex of the recoil stroke the recoil spring acts to reverse the direction of the breechblock, chambering a fresh cartridge. Until trigger pressure is released another discharge is not possible. 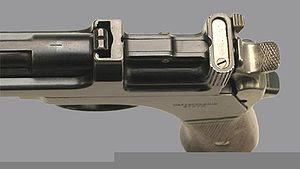 A unique feature of this pistol model is the unloading device. While the breechblock is held open, pulling down on the serrated lever on the right side at the top of the grip panel will withdraw the lip which is holding the cartridges in the magazine, enabling the magazine spring to move the platform up and force all the cartridges out of the magazine. 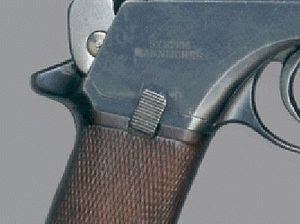