Bet you did not know about these dandies? HUH?
Grumpy

Captain Joseph Lapsley Wilson of the First City Troop circa 1894

The First Troop Philadelphia City Cavalry, also known as the First City Troop, is a unit of the Pennsylvania Army National Guard. It is the oldest military unit in the United States still in active service and is among the most decorated units in the U.S. Army. Accordingly, the Troop operates under a number of principles of self-governance unique in the U.S. military, including the election of unit members and officers, voluntarily forgoing pay for their military service to the country, continuing to practice horse cavalry skills and tactics, and recruiting a high percentage of its members from veterans of prior active duty service across all branches (many of whom resign past officer commissions to join), as well as older civilian mid-career professionals.[1] 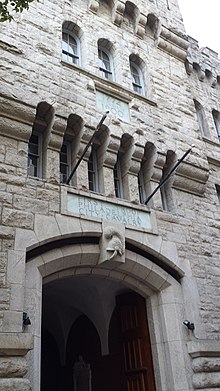 Facade of the First Troop armory

It is the only U.S. military unit that owns its own armory building, built with private funds in Philadelphia’s Rittenhouse Squareneighborhood.
As of 2014, the troop had 35 active members, down from 86 in 2000.[1]

The First Troop Philadelphia City Cavalry, or “First City Troop”, was organized in 1774 as the Light Horse of the City of Philadelphia, often referred to as the Philadelphia Light Horse, one of the first patriotic military organizations established in the American Revolution.
Abraham Markoe was the founder and the first Captain[2] of the Philadelphia Light Horse, known today as the First Troop Philadelphia City Cavalry.[3]
Early members came from a number of local social organizations, including the Schuylkill Fishing Company, the Schuylkill Company of Fort St. Davids, the St. Andrew’s Society of Philadelphia, the Society of the Friendly Sons of St. Patrick, the Society of the Sons of St. George, and especially the Gloucester Fox Hunting Club. Captain Samuel Morris was Gloucester’s first president and Captain Robert Wharton its last.
During the Revolution, the troop fought in the battles of Trenton, Princeton, Brandywine, and Germantown. It often served as George Washington‘s personal bodyguard. The unit also saved James Wilson at the “Battle of Fort Wilson” riot.
During the American Civil War, the First City Troop was called into active duty several times, beginning with the 1861 Campaign that led to the First Battle of Bull Run. During the Gettysburg Campaign, the company, under the command of future U.S. Speaker of the House Samuel J. Randall, performed scouting duties leading into the Battle of Gettysburg, Pennsylvania, in late June before being redeployed to York County following a brief skirmish on June 26, 1863. The company later screened Columbia-Wrightsville Bridge against the Confederateforces of John Brown Gordon.
John J. Pershing said that “no National Guard organization in the country did more, relatively, in the First World War than” the First City Troop.[4]
Today, the First City Troop deploys overseas with the Pennsylvania National Guard in support of Army operations. Since 9/11, the unit has deployed to Bosnia, Iraq, Egypt, and Kuwait, with elements of the unit additionally deploying to Afghanistan, the Persian Gulf, Europe, and Latin America. Membership is by election. Soldiers on the active roll continue to donate their drill pay back to the unit, in order to maintain a tradition of voluntary service.
The troop draws its membership from Troop A, 1st Squadron, 104th Cavalry Regiment, 28th Infantry Division (United States), Pennsylvania Army National Guard.