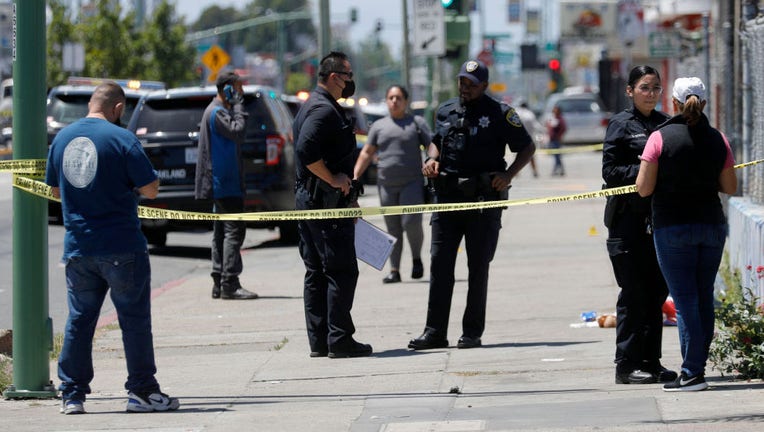 DETROIT – About 2 in 10 U.S. adults say they or someone close to them has had a personal experience with gun violence, according to a recent poll that shows Black and Hispanic adults are especially likely to have had their lives touched by it.

The poll by the University of Chicago Harris School of Public Policy and The Associated Press-NORC Center for Public Affairs Research found that 54% of Black Americans and 27% of Hispanic Americans reported that they or a close friend or family member experienced gun violence in the last five years, compared with of 13% of white Americans. Overall, 21% of U.S. adults reported a personal tie to gun violence, such as being threatened by a gun or being a victim of a shooting.

Ebony Brown, a 39-year-old accountant in Atlanta, is among those who has seen gun violence touch those close to her. Her brother was shot to death in 2002 in Jacksonville, Florida, while visiting from college.

“He was at the right place at the wrong time,” said Brown, who is Black.

An acquaintance of a friend pulled a gun during an attempted robbery at a home and shot several people, including Brown’s brother, who she said died instantly. Another person also was slain.

Brown said she doesn’t consider herself a gun lover, but she’s worried enough about becoming a victim of gun violence herself that she’s considering getting a handgun.

“I’m really getting ready to get one. I’ve been to the range,” Brown said. “My dad is a police officer and he wants me to have it.”

The survey was conducted after a stretch of mass shootings across the U.S., from a grocery store in New York, an elementary school in Texas, and a Fourth of July parade in Illinois — along with a smattering of incidents of gun violence in cities across the U.S. that don’t always make national news but leave local communities on edge.

Professor Jens Ludwig, who is director of the University of Chicago’s Crime Lab, said that 1 in 5 people with a friend or family member who was a victim of violence was a “strikingly high number.”

It shows that those who experience gun violence “aren’t the only victims,” he said.

Ludwig compared the way gun violence affects entire communities to the COVID-19 pandemic, noting that the people who died or became very ill from COVID-19 weren’t the only ones affected; kids were kept home from school, businesses closed, and people couldn’t see loved ones.

The same is true with gun violence, Ludwig said. “People are changing the way they live,” he said.

The father of the 21-year-old man charged with killing seven people when he allegedly unleashed a hail of bullets on an Independence Day parade in the Chicago suburb of Highland Park sponsored his son’s firearm owners identification card two and half years ago despite two instances of police being called to their home over threatening behavior.

Robert E. Crimo III, who was charged with seven counts of murder Tuesday, applied for a FOID card in December 2019 at age 19, Illinois State Police revealed in a press release. “The subject was under 21 and the application was sponsored by the subject’s father,” Illinois State Police said. “Therefore, at the time of FOID application review in January of 2020, there was insufficient basis to establish a clear and present danger and deny the FOID application.”

For example, he said, when people who can afford to leave cities where gun violence is a big problem move out in droves, it hurts everyone still there.

Following a particularly violent summer weekend in Detroit that saw two dozen nonfatal shootings and seven homicides, Police Chief James White denounced the rising gun violence in the city and across the nation.

“We understand these numbers make media headlines, but to us they represent people,” White told reporters. “These represent families. This represents children. This represents husbands, wives, brothers and sisters. Our Detroit families are in pain. Neighbors near the gunfire are shaken and lives have been forever changed.”

That is in line with recent data from the Centers for Disease Control and Prevention. The data has shown a spike in gun violence since the pandemic, with gun-related homicides increasing across the country in large and small metro areas and in rural areas. The data found Black people are disproportionately impacted by gun violence and are more likely to be the victims of gun crimes or homicides.

Brittany Samuels, a 31-year-old in Detroit, says she still carries physical scars from being shot at age 14 by her uncle, who she said was bipolar and schizophrenic, and fatally shot her grandmother, one of his coworkers and himself.

She said it has also shaped the way she thinks about gun violence and gun ownership, and she feels it is too easy for guns to get into the wrong hands.

Samuels, who is Black, said gun violence in her community has made her rethink where and when to go places, like skipping Detroit’s downtown entertainment district or certain gas stations as certain times.

“You don’t know if someone is going to rob you at gunpoint or if they are going to have a shootout in the middle of the gas station,” she said. “I don’t go when it’s dark — even if it’s in the morning. And you really won’t catch me at a gas station that’s not lit up.”

Diego Saldana, 30, of Baldwin Park, California, in the Los Angeles metro area, said he found himself facing a 9mm handgun during an attempted robbery six months ago. He feels gun violence is on the rise and believes it’s likely he will be a victim of gun violence again in the next five years.

“I think it’s due to the (poor) economy — people are desperate for easy money,” said Saldana, who is Mexican. “People … are stressing about stuff and expressing it with violence. Everybody is on edge.”