By MELISSA KOENIG FOR DAILYMAIL.COM

A romance novelist who once penned a blog post entitled ‘How to Murder Your Husband’ has been convicted of doing just that.

Nancy Crampton Brophy, 71, was convicted on Wednesday of second-degree murder for shooting dead her chef husband Daniel Brophy, 63, while he was working at the Oregon Culinary Institute in June 2018.

Police said he was shot twice, and was found dead by his students.

Prosecutors have claimed Nancy killed her husband in a scheme to collect his $1.4 million life insurance policy.

They had rested much of their case on the fact that Crampton Brophy had acquired gun pieces in the months before her husband’s death – including a piece that could obscure what gun a bullet was fired from.

‘She had the plan in place,’ Shawn Overstreet, a deputy district attorney claimed in closing arguments last week, according to the New York Times. ‘She had the opportunity to carry out this murder. She was the only one who had the motive.’

‘Nancy is the only person who could have committed this crime,’ he argued.

But lawyers for Crampton Brophy claimed the gun pieces were for a novel she was writing – about a woman who slowly acquired gun parts to complete a weapon and turn the tables on an abusive husband.

The defense argued Crampton Brophy and her husband were actually in a loving relationship of more than 25 years.

In the end, the five men and seven women on the jury delivered a guilty verdict after about eight hours of deliberation, according to Oregon Live.

‘We were hoping [the jury] would see it as the “could’ve, should’ve, would’ve that we did, but they didn’t,’ she said. 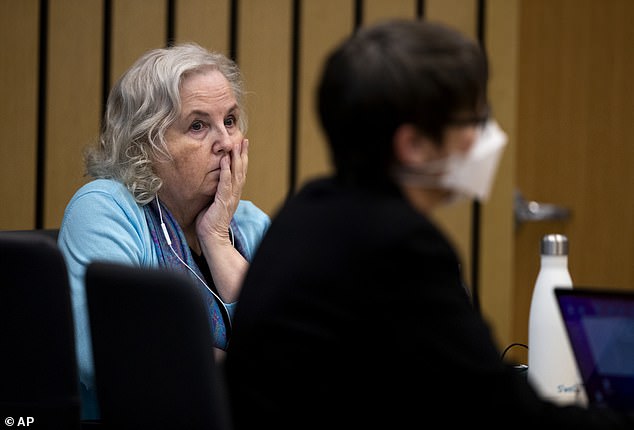 Nancy Brophy, 71, was convicted on Wednesday of the murder of her husband 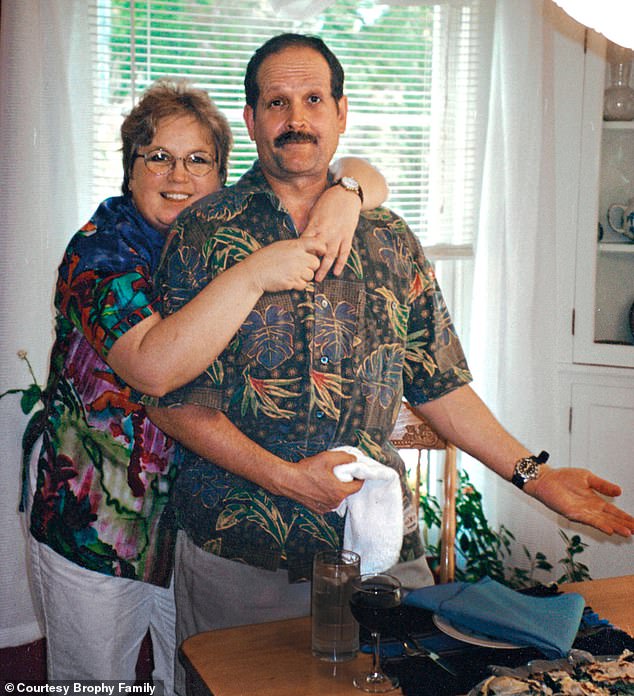 Prosecutors have claimed that she shot her husband, Daniel Brophy, right, dead in June 2018 to collect his $1.4 million life insurance policy 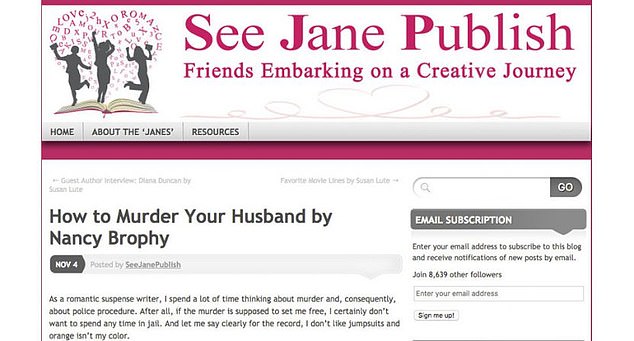 Daniel Brophy was killed on June 2, 2018 in a teaching kitchen at the Oregon Culinary Institute in southwest Portland, where he had worked since 2006.

His students arrived shortly afterwards, and discovered his body on the floor of a kitchen. Police said at the time he was shot twice.

But about a half an hour before his death, Crampton Brophy was caught on camera driving to the culinary institute.

Twenty minutes later, she drove away and went home to Beavertown.

Crampton Brophy testified in court that she did not remember making that trip, theorizing she may have been making a coffee run and taking notes for her new romance novel, according to the Times.

But prosecutors claim that Crampton Brophy was motivated to kill him by his $1.4 million life insurance policy, and played an audio recording to the court of her asking a detective four days later to write a letter specifically exonerating her in her husband’s death so she could collect the life insurance policy.

They noted the couple was having financial problems at the time – and the fall before he died, the couple took $35,000 out of Brophy’s 401K account, about half of its total amount, to pay down credit cards and catch up on the more than $8,000 they owed on their mortgage, according to KOIN.

She claimed the policy was actually worth $40,000, but investigators said she tried to claim 10 different policies that totaled $1.4 million, as well as a worker’s compensation plan because he was killed on the job.

‘Nancy Brophy was maintaining all those life insurance policies while continuing down a path of financial ruin,’ said Overstreet.

‘Well over a thousand dollars a month was being paid into these policies at a time when they were struggling to pay their mortgage.’

He said that despite Crampton Brophy and Brophy celebrating a large wedding in 1997, they did not actually legally wed until shortly before he was murdered.

The kitchen showed no signs of a break-in, and Brophy’s wallet and phone were on him at the time of death.

No suspects were ever identified except for Crampton Brophy, who was arrested in September 2018 and pleaded not guilty to the crime. 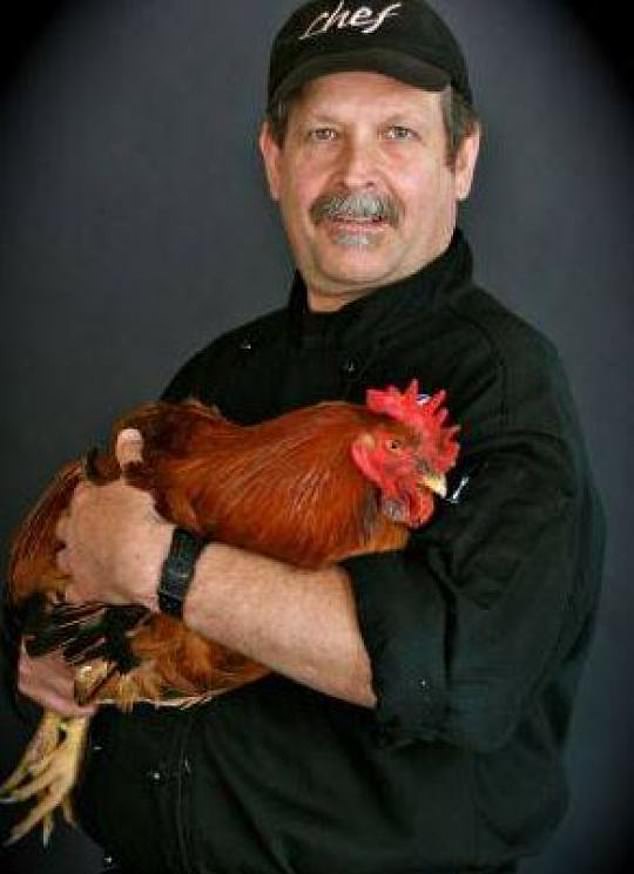 Brophy was killed in a teaching kitchen at the Oregon Culinary Institute in southwest Portland, where he had worked since 2006

The prosecutors pointed to evidence that Crampton Brophy had bought a ‘ghost gun’ assembly kit online on Christmas Eve 2017, which Brophy himself signed for when it was delivered the next month, and his wife was traveling for work.

Unable to put the gun together, Nancy bought another gun at a Portland gun show in February 2018 and, a month later, began practicing at a gun range.

Shawn Overstreet, a deputy district attorney, claimed Crampton Brophy used a Glock pistol she bought at the gun show to shoot her husband, then swapped out the gun’s barrel with an identical mechanism she bought on eBay, which prevents forensic experts from matching the spent bullets with the original slide-racking system.

Lisa Maxfield, one of two defense lawyers, said Crampton Brophy bought the guns as research for her novels.

She also said Crampton Brophy had worked as a salesperson for a variety of insurance companies and had an incentive to buy multiple policies when she changed jobs, to demonstrate her belief in the product, and because she received a commission.

Maxfield told the court the ‘circumstantial case’ against Crampton Brophy ‘begs you to cast a blind eye to the most powerful evidence of all: love.’

She said her client had no reason to kill her husband, and her finances deteriorated after his death.

‘Nancy has always been thoroughly, madly, crazily in love with Dan Brophy, and she remains so to this day,’ Maxfield said at the time.

Defense attorneys also leaned on the neighborhood’s video surveillance, noting that homeless people appeared to be in the area that morning. 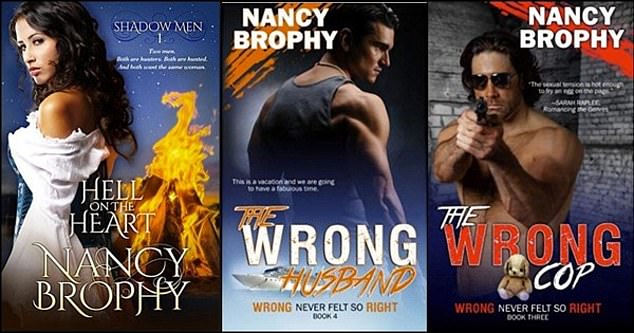 Crampton Brophy was a struggling novelist, whose  titles include Hell of the Heart, The Wrong Husband and The Wrong Cop

But the novelist, whose titles include The Wrong Husband and The Wrong Cop, previously spoke about her home life in writer forums, where she said their marriage, like any other, had its ‘ups and downs’.

The blog post, which she wrote on the site Seeing Jane in 2011, began: ‘As a suspense writer, I spend a lot of time thinking about murder and, consequently, about police procedure.

It included five potential motives for wanting to kill your husband that were divided into the following categories;

‘Financial: Divorce is expensive, and do you really want to split your possessions?’

‘Lying, cheating b*****d: This is a crime of passion. In anger, you bash his head in or stab him with a kitchen knife.’

‘Fell in love with someone else: Let’s say your Church frowns on divorce. You need to be a widow, so you won’t fall out of favor with your religion.’

‘Abuser: This one is tough. Anybody can claim abuse. What is abuse?’

‘It’s your profession: Now we’re talking. You already possess both skill and knowledge.

‘You have the moral ambiguity necessary to carry it off.’

She also gave the reader ‘options’ on what their murder weapon or technique should be.

She wrote: ‘Guns – loud, messy, require some skill. If it takes 10 shots for the sucker to die, either you have terrible aim or he’s on drugs. 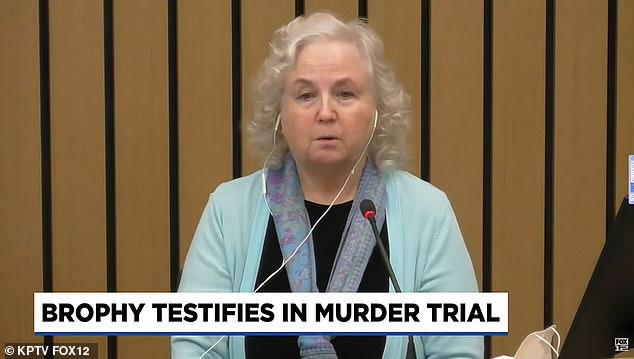 Crampton-Brophy had testified that she does not remember traveling toward the Culinary Institute that day, but claimed it was likely for a coffee break or to write part of her novel

Prosecutors were barred from discussing the blog post during the court hearings, after Ramras deemed the post too old to be relevant – and said that any value it may provide the trial is outweighed by the prejudice it may spark.

But as they cross-examined Crampton Brophy, the Times reports, they asked her about one theme of the post, asking her: ‘If there is one thing that you know about murder, is it that anyone is capable of doing it?’

She replied that she ‘absolutely’ believes that, noting people can murder if they get pushed into a corner, or to protect someone or in a rage of fury.

She also noted that financial issues could be a motivating factor, but she and her lawyers claimed she did not have enough of a financial motivation to kill Daniel – noting that the life insurance policies were not exorbitantly high and she wasn’t listed as a beneficiary on all of them.

Crampton Brophy also claimed a fictional version of her case would not stand up to scrutiny.

‘An editor would laugh and say “I think you need to work harder on this story,”‘ she claimed. ‘”You have kind of a big hole in it.’