On March 22, in the broad daylight of a typically gorgeous day in Beverly Hills, thieves in hoodies and sunglasses took a sledgehammer to the plate glass window of Peter Sedghi’s boutique and furiously rummaged through the shards. In less than 90 seconds, the robbers stole more than $3 million worth of jewels. Two days later, in response to a wave of high-end robberies, the Los Angeles Police Department announced there would be no arrests. Instead, it cautioned Hollywood residents not to wear high-quality jewelry in public.

“Beverly Hills is one of the most affluent, safest neighborhoods in the world and now everyone is scared,” Sedghi said. “All of my clients – no one wears anything.”

Crime has risen dramatically in Los Angeles, as well as in many other major cities, since the start of the pandemic and last summer’s protests against police violence resulted in the slashing of many law enforcement budgets. News stories document rising fear across LA and crime has become the major issue in both the upcoming mayor’s election and a possible recall of the district attorney. It may not be surprising that issues of race and class are driving this concern, though they have a new twist.

Wealthy and predominantly white neighborhoods have experienced the sharpest upticks in a wide array of crimes, according to an analysis conducted for RealClearInvestigations by criminologist John Lott of the Crime Prevention Research Center. 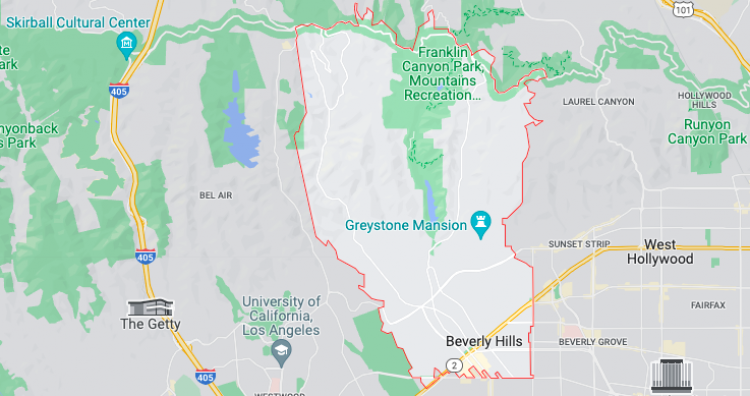 The zip codes showing the largest increases are home to film and pop stars, including Beverly Hills, of “90210” fame, where Beyonce and Jay-Z have their West Coast house; Bel Air, of “Fresh Prince” Will Smith fame, where Jennifer Lopez now resides; and Los Feliz, where Katy Perry and Orlando Bloom share a house and where Angelina Jolie has resided since her divorce from Brad Pitt. Nearby, the U.S. Postal Service has suspended delivery to one neighborhood in Santa Monica – a town where celebrities including Tom Cruise, Christian Bale and Sandra Bullock reportedly have homes – because “multiple carriers have been subjected to assault and threats of assault.”

Lott’s analysis (data here), which correlates census and LAPD crime statistics for the period January 2019 to January 2022, also reveals that those neighborhoods now account for much greater shares of the total number of crimes committed in Los Angeles. It shows that the richer and whiter the area, the greater the increase in both raw crime totals and percentages of total city crime.  This includes a wide range of felonies, from robbery, burglary, shoplifting and car theft to aggravated assault and rape. Although poor and minority neighborhoods still experience the largest total number of crimes, including violent crimes such as murder, the shift to relatively safer neighborhoods is pronounced.

While the total number of rapes fell in Los Angeles during the 37-month period studied, their share spiked in predominantly white neighborhoods – rising 18.2% in neighborhoods where they comprise 81% to 100% of residents. 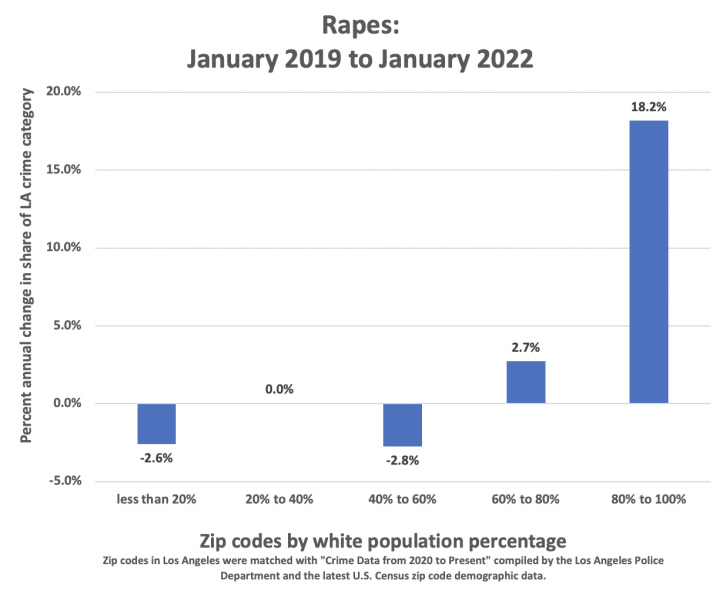 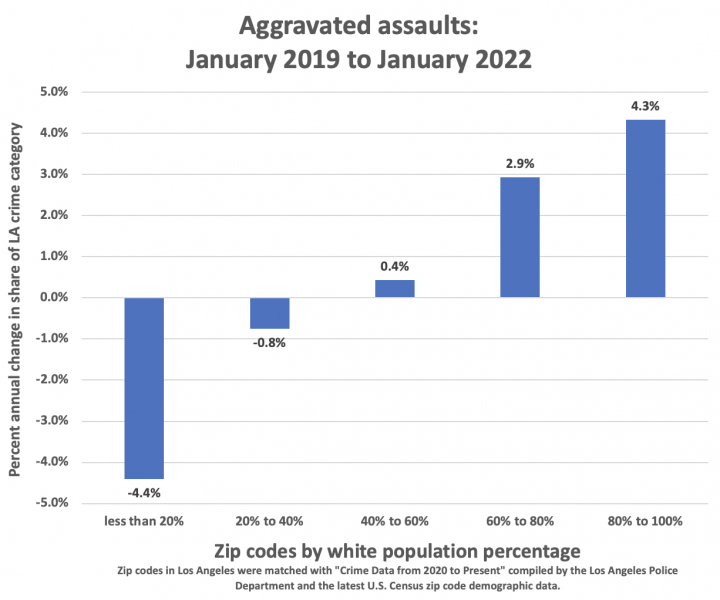 Lott also found that while the number of reported robberies across the city has fallen slightly, the share of total crimes increased sharply in wealthier and whiter zip codes, rising by 11.8% annually over the 37 months in the most heavily white neighborhoods. 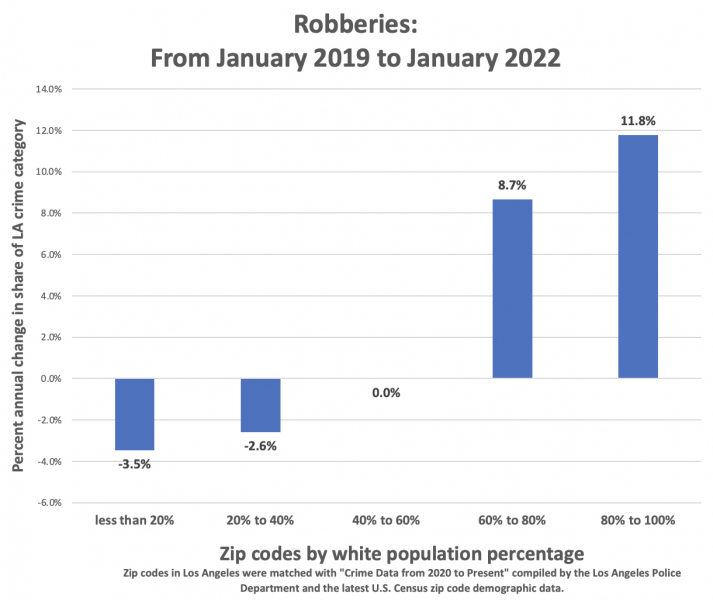 Fear is more pronounced than ever in posh areas, according to several Angelenos familiar with the turf of the rich and famous. This is evidently in part because the fancy wheels often seen on the streets of Beverly Hills, Brentwood, or other upscale communities have also been the prime targets of thieves, Lott’s analysis indicated. 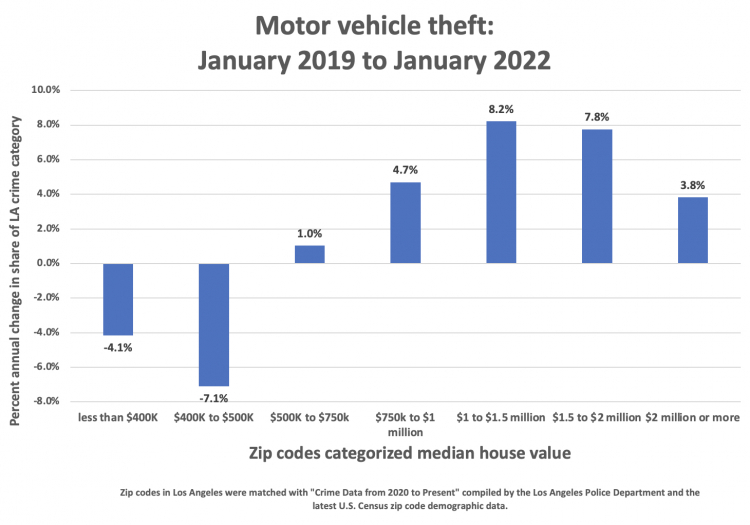 Although Lott only analyzed data from Los Angeles, anecdotal evidence and news reports suggest similar trends may be occurring in Chicago, New York, Philadelphia, and other cities experiencing crime waves.

“You see people just smashing glass and stealing on the Miracle Mile in Chicago, videos of people in cities just carrying bags full of clothes they’ve stolen,” Lott said. “I don’t think we’ve ever seen crime quite like that in the U.S.

“There has surely been a change in where the crimes are occurring, moving from lower income to higher property values and to more places. I was surprised by the extent of it.” 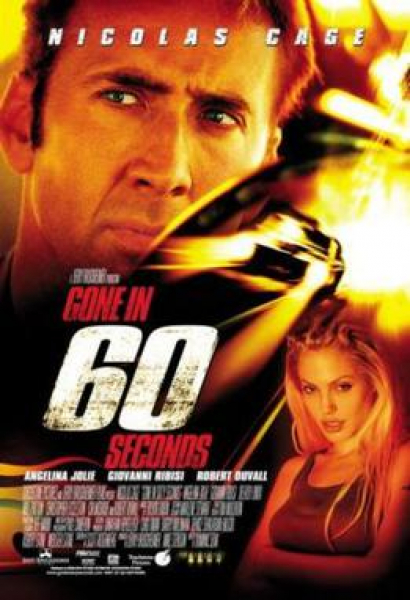 Just what has made once more insulated neighborhoods vulnerable is difficult to pinpoint. RealClearInvestigations reached out to the LAPD and the Los Angeles County Sheriff’s Department, as well as the Beverly Hills Police Department, but none of the three agencies returned phone calls or responded to emailed questions. Details on the race or ethnicity of those involved in the crimes were thus generally unavailable. Also unavailable were official assessments of whether any of the incidents constituted hate crimes.

Lott noted how California voters have moved the needle on crime in recent years. Proposition 47 decriminalized a number of theft and drug charges, making them misdemeanors, as it did several “non-violent” felonies. Voters also approved Proposition 57, which allows for early release of non-violent offenders.

Los Angeles and other urban centers, including the Washington, D.C. area, have also been plagued recently by the phenomenon of “crime tourism,” in which organized gangs from South America obtain visas online and jet into the Golden State to burglarize residences – operations that have targeted luxury homes.

“They’re coming here for the purpose of targeting neighborhoods,” a cop in neighboring Ventura County told ABC’s LA affiliate on March 23. “Not violent crimes, but they’re going after the big bucks.”

The Los Angeles Times reported this week that more than a dozen gangs “are targeting some of the city’s wealthiest residents … sending out crews in multiple cars to find, follow and rob people driving high-end vehicles or wearing expensive jewelry, according to police.” 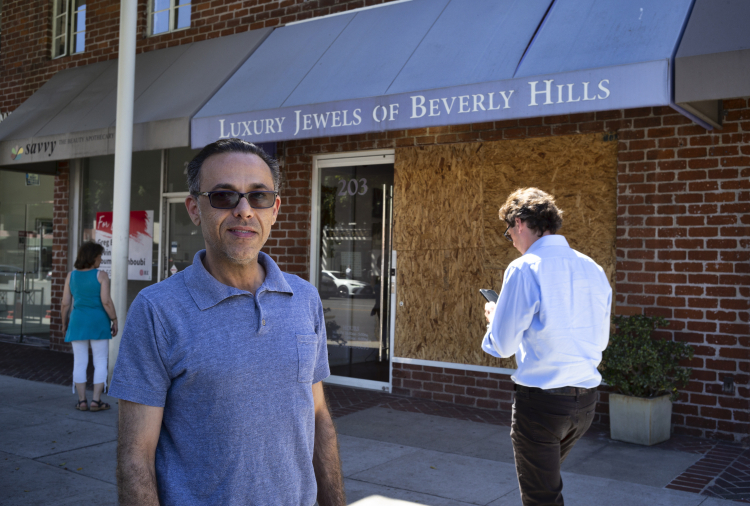 Bling-averse: “All of my clients – no one wears anything,” says jeweler Peter Sedghi, at ransacked shop.
AP

Lili Bosse, recently elected mayor of Beverly Hills for the third time, said she sees the crime hitting once seemingly insulated zones as an extension of what is happening to the entire city. “We live in chaos, it seems like Gotham City,” she told RCI. “People have been traumatized regardless of where they live. It’s not just a matter of physical safety, this affects one’s sense of mental well-being. In Los Angeles, there is a sense of anxiety and uncertainty.”

Indeed, a look at “other theft” outside of burglary and motor vehicles also shows a notable shift toward Tinseltown’s fabled moneyed quarters. 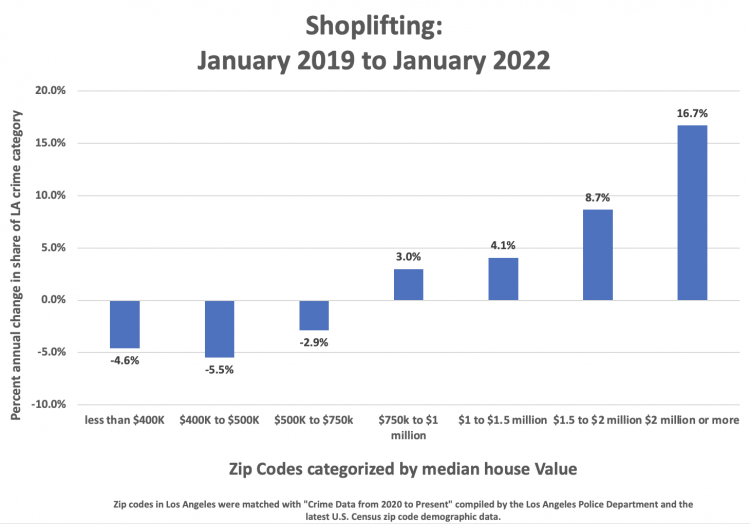 These shifts are in addition to some headline-grabbing incidents that have shaken the rich and famous. Last December, Jacqueline Avant, the African-American wife of Motown Records chief Clarence Avant, was murdered in her Beverly Hills home, and in January Brianna Kupfer, a white UCLA graduate student, was killed in a random attack at a luxury furniture store in Brentwood. 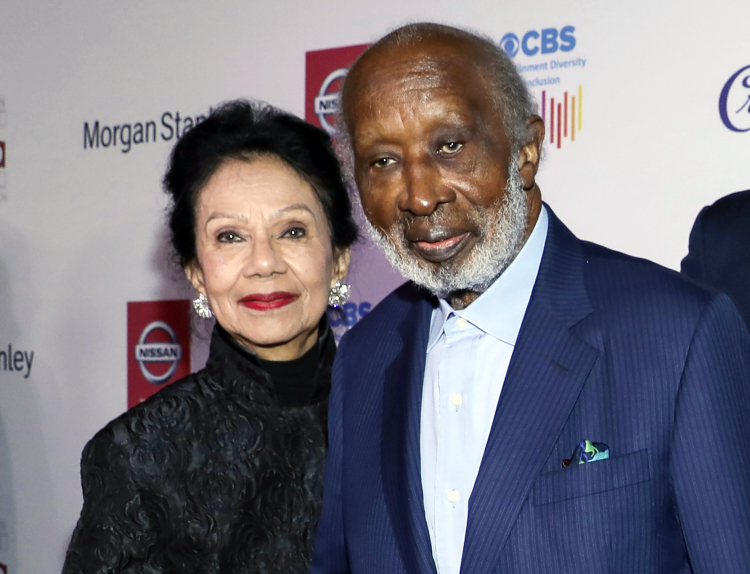 Bosse stressed crime in her recent victory, and the issue has taken center stage in Los Angeles politics. The mayor’s race has seen billionaire developer Rick Caruso make the rise in crime a centerpiece of his campaign, vowing to restore the ranks and funding of the LAPD, which has seen both slashed since George Floyd was murdered by a Minneapolis police officer in 2020. Last July, the city council voted to cut LAPD money by $150 million.

But even more than the mayor’s race, the disgust and vulnerability felt by many Angelenos is fueling the recall effort against District Attorney George Gascon. Bankrolled by more than $3 million from George Soros-funded PACs, Gascon came to office with a promise to “turn our court system upside down.”

The recall-Gascon forces hope to follow the path of famously liberal San Francisco, which put on the ballot a recall of prograssive District Attorney Chesa Boudin – who has delivered on his promise to radically reform criminal justice since his election in 2019. And the money flowing to the Gascon effort would seem to reflect the trends detected in Lott’s analysis for RCI.

Big money Democrats who live in Los Angeles’ toniest districts have contributed to Gascon’s recall, according to a recent article in Los Angeles magazine which cited an exclusive look at still unreleased donors’ lists.

But among the most ardent supporters of Gascon’s recall are the ranks of his deputy district attorneys who are already engaged in litigation against some of his left-wing initiatives, such as refusing to file enhancements on charges that deputy DAs say California law requires of prosecutors. 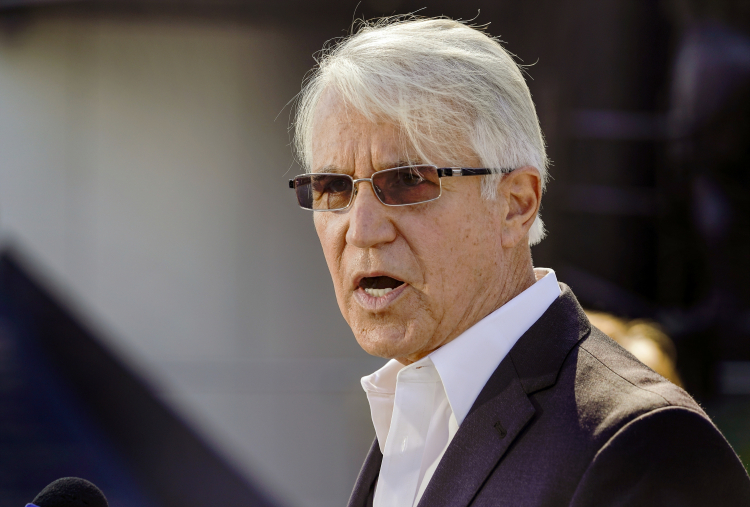 George Gascon, district attorney: The vulnerability felt by many Angelenos is propelling the effort to remove him.
AP

“The DA doesn’t ask for bail on non-violent offenders and criminals aren’t held accountable for having a gun,” said Eric Siddall, president of the Association of Deputy District Attorneys, their union. “That’s one reason you’re seeing that in neighborhoods traditionally considered safe – no one is detained, no one is held accountable any longer.”

Siddall believes the numbers showing a big shift to more privileged Los Angeles neighborhoods could be less pronounced because “non-violent property crimes are the most underreported of all, which happens for factors like the relationship people have with the police, the victim feeling like it serves no real purpose to report it, or they might fear retaliation.”

In more white-collar circles, however, Siddall said, fear of crime is changing behaviors.

“Anecdotally, I can’t tell you how many people have come up to me and asked if I could recommend a certain kind of firearm,” he said. “People are signing up for gun training courses, and these are people who never before in their lives ever thought of having a gun.”

Gascon was an architect of Proposition 47, the decriminalization measure, and a backer of Proposition 57, the early-release measure. Momentum may be growing for a repeal of the first initiative, along with possibility of a major change among Los Angeles’ top elected positions.

For now, however, that offers little solace to Angelenos who aren’t used to feeling crime’s pinch.

“A lot of people are afraid,” Sedghi said. “Everyone is thinking about crime and worried about being a victim. People are looking behind them all the time while driving home, afraid they are being followed.”

This and all other original articles created by RealClearInvestigations may be republished for free with attribution. (These terms do not apply to outside articles linked on the site.)

We provide our stories for free but they are expensive to produce. Help us continue to publish distinctive journalism by making a contribution today to RealClearInvestigations.