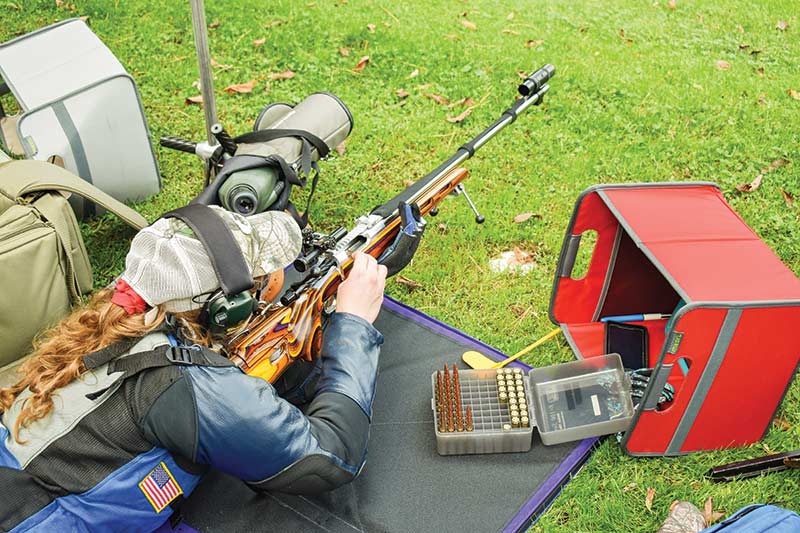 The jaws immediately drop. “You shoot 1,000 yards? With iron sights?” It’s amazing how many people think it’s impossible. With the rise in popularity of “long range” shooting, classic disciplines like Palma have been forgotten. While competing with the AR-15 — originally with iron sights, then with a 4.5x optic — I attended 600-yard mid-range matches to better my prone skills. Farther down the firing line, on the 1,000-yard range, I would admire the beautiful stocks of incredibly long barreled bolt-rifles, wondering at the nearly clean scores fired by competitors.

I first heard of Palma from my junior coaches. They spoke of their student, Eric Eilberg, and of his travels with the Young Eagles Team. It seemed mystical. I never imagined being able to travel to shoot. I wasn’t involved in Olympic-sanctioned shooting sports. My discipline of choice, High Power, is relatively niche and not offered at high school or college levels but the first time I heard Palma, I wanted to be like Eric. I wanted to join the Young Eagles team, shoot as well as he and have the opportunity to experience new things. Way out there — the view from the firing line of the 1,000-yard targets at Alliance
Rifle Club in Malvern, Ohio. Palma competitors routinely stay within the 10″ X-ring
with iron sights at this distance!

The first Palma Trophy match was held in 1876 in New York as part of the centennial celebration of U.S. independence. Five countries competed in the inaugural match — Australia, Canada, Ireland, Scotland and the United States. The U.S. claimed top honors. More countries have joined, competing in world shoots held every four years. The Palma Trophy Match course of fire is two sighting shots and 15 shots for record at 800, 900 and 1,000 yards on an NRA-LR target. The 44″ aiming black holds the X, 10, 9 and 8 rings with a 20″ diameter 10-ring and 10″ X-ring.

My training routine was firing over a hundred rounds a week in the summer, sometimes more and I began competing at Alliance Rifle Club in Malvern, Ohio. There I became friends with two incredible long-range shooters and coaches — Chuck and Kim Rowe. They impressed on me how important it is to have goals and warned me not to spread myself thin over different disciplines. Being the best at one thing takes dedication. When I began considering Long Range, Kim told me I wasn’t allowed until I earned my Distinguished Rifleman’s badge in Service Rifle. She may have been kidding, but I wasn’t about to find out.

Each Palma rifle is unique as a snowflake and individually built to fit the shooter better than a glove.

Four years passed before I began preparing myself for the next step in my shooting career. My dad encouraged me to take advantage of the opportunity while I had it, though I still was unsure of the future and apprehensive about spending money while in school.

You do not purchase a Palma rifle online or from a gun store. Palma rifles are custom-built, handed down, or purchased secondhand from a competitor. In my case, someone leaving long-range shooting wanted his equipment to go to someone young who could keep the sport alive. I purchased a Warner #2 rear sight, a Stallings Right Sight with an iris and an old McMillan black prone stock.

I had several pieces to the puzzle, but not all. Putting together a top-of-the-line rifle is expensive, especially for a freelance writer in college. I am incredibly grateful to Krieger Barrels, Kelbly’s and Bullet Central whose sponsorships helped me fill in the blanks. In September of 2019, I earned my Distinguished badge in service rifle, the green light to start into something new.

Several people were consulted during the decision process as I considered a true Palma rifle or a generic long-range rifle. One person suspected I would be unable to handle the recoil of the .308. I ultimately decided to join the Young Eagles team and would need a .308. I also remembered “if Kim could shoot a .308, I could too.” I selected a 30″ 1:13 twist Krieger Barrel with a medium Palma contour. Kelbly’s chambered the barrel and installed one of their classic actions, the Big Bore Panda. Bullet Central donated a single-stage Bix’n Andy Remington 700 Benchrest Competition trigger. One of the biggest initial problems for Serena was realizing her stock “Goliath” didn’t fit her.
A new, shorter stock from her coach made an enormous difference in her performance.
Photo: Eric Eilberg

I did not want to jump right into a match. Eric helped me boresight the rifle, approximate eye relief and break in the barrel. We used a Shotmarker electronic target at 600 yards. This allowed him to coach me from the firing line. I spent more time the first day working on position and adjustments than shooting. First and most important lesson of Palma: Make the gun fit you, do not fit yourself to the gun. This means if something is uncomfortable or doesn’t seem right — do not keep shooting! Stop and fix it. Second lesson of Palma — this process never ends. Buttplate positions, aperture sizes — what is best will change by the day depending upon the range and light conditions.

Most Palma competitors load all their own ammunition for utmost accuracy.
Serena uses an RCBS single-stage press and weighs every charge individually.
Photo: Jedidiah Gaddie

Small things make a difference. I borrowed handstops and slings from fellow shooters and am still determining what works best for me. Palma allows competitors to use a hook to secure the sling to their shooting coat. A separate coat allows you to keep your sling ready to go. A local leathersmith cut my coat’s collar so it didn’t ride against my neck when I lay down and added a buckle to keep my shoulder pad from bunching. These seemingly minor changes help ensure you place the rifle in the same spot every time.

Your mat also makes a huge difference. I am a smaller-framed person. The thin, rollable mat I use for High Power began to bunch up underneath me as I fired, altering my position. I quickly learned a sturdier, thicker folding mat works much better. Currently, I use the Creedmoor quad fold shooting mat. It has a waterproof vinyl bottom, a double layer of foam for extra support under the elbows and doesn’t move when I shoot! Even changing your mat makes a difference in position and the buttplate location — take nothing for granted. Serena gets tips from coach Eric Eilberg. The most important part of learning
any new discipline is to find a mentor who is already experienced and accomplished
in the sport. Photo: Jedidiah Gaddie

One size does not fit all. The Rowes mentor me, adjust my position and give me tips. They are well-decorated shooters, members of the U.S. National Rifle Team and Chuck is also a coach for the National F-Class team with Kim the team adjutant. They first noticed I needed a mirage band. My first few shots were level but began to scatter as the heat from the barrel distorted my sight picture. A mirage band, ceiling fan chain and cut off scope mount solved the issue. Even so, I consistently fired worse shots the more I took.

By the time I fired 15 shots I was near tears. Each shot sent the rifle stock smashing into my collarbone. Scared I could not handle the recoil, I should have listened to the advice I received but suffered through it. My enthusiasm waned, though I tried to hide it. With a 14″ LOP stock it was nearly impossible for me to see through the sights. I also needed a rear sight extension, exacerbating the problem. I compensated by placing the buttstock far on my collarbone and letting it absorb the recoil.

Tired of bleeding through my shirt every match, Chuck convinced me to try one of his spare stocks, a petite Masterclass copy too small for him. It was much shorter and slighter — not only easier for me to grip but more comfortable. They were both bedded for Kelbly’s big bore panda actions so the switch was easily made. He graciously traded stocks with me — the black synthetic stock Chuck named “Goliath” for the colorful laminate one which remains nameless.

Starting out, you cannot be afraid to change and try new things. Go to local matches. Talk to competitors. Before you buy all of your equipment, ask to borrow things to see what you like and need. Looks don’t matter. It was hard for me to give up the black stock I had become attached to, but Chuck and Kim were right — I was miserable. Though I’m not at the top of the leaderboard, I’ve been able to improve and enjoy small successes, including joining the Young Eagles team.