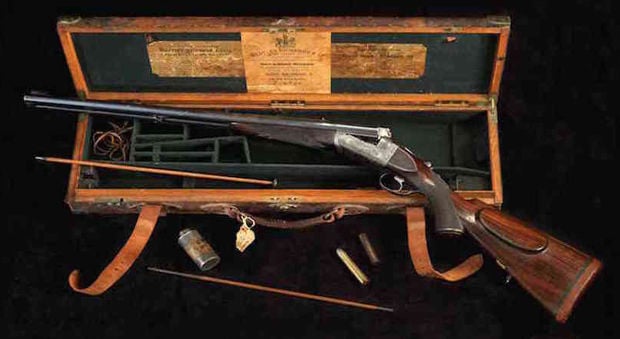 Ernest Hemingway was a writer and a hunter, or rather a sportsman because he also fished. On one such safari in Africa he used a 577 Nitro double. 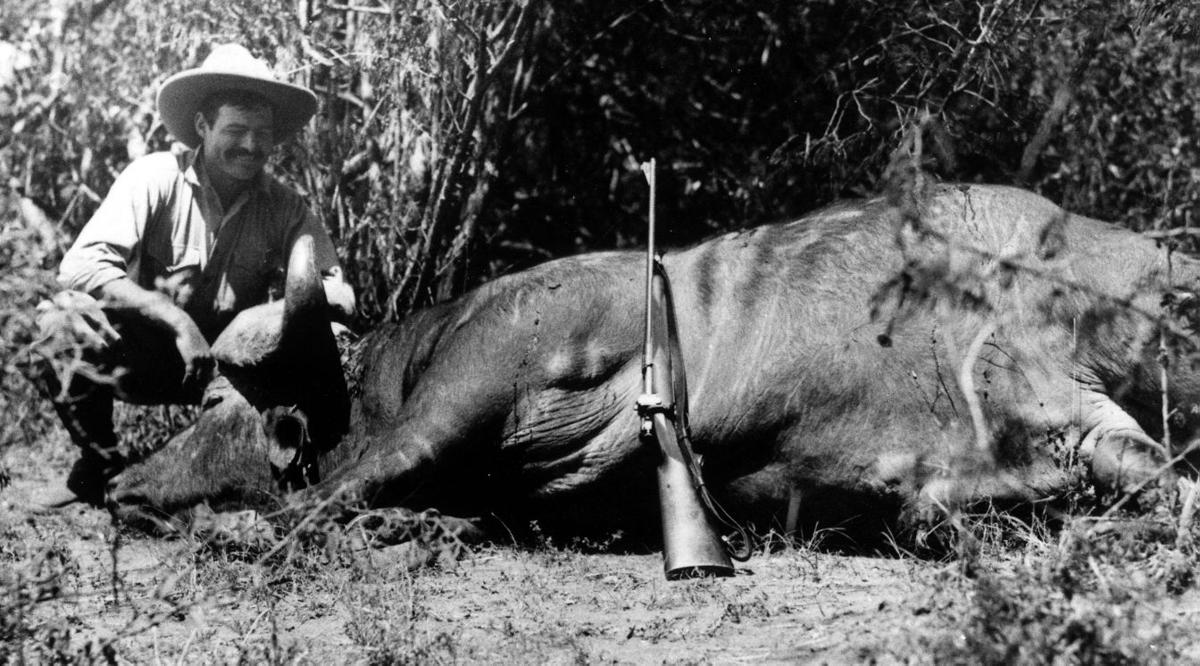 Ernest Hemingway on safari in Africa after making a kill circa 1933.

The other day I sat at my desk looking over my personal library. For some unexplainable reason the writings of Ernest Hemingway stole my attention. Hemingway was a writer and a hunter or rather a sportsman because he also fished.

On one such safari in Africa he hefts a .577 Nitro double. Made by Westley Richards, a company started about 1812, this .577 Nitro double was a break-action side-by-side weighing in at 15 pounds and estimated 45 inches overall with a single trigger.

Westley Richards, like Weatherby, were Old World craftsmen for the time. These gunsmiths made every rifle to the specifications required for its intended use.

This rifle was a break-action like most side-by-side shotguns. A lever on top of the action swiveled from left to right and opened the action exposing the chambers. The chambers could be loaded at the same time.

The firing mechanism was set when the action closed. Pulling the trigger fired one side then pulling the trigger again fired the other. A simple sliding switch on the tang of the action, under the shooters thumb, moved forward and backward engaging the rifles safety or left to right selecting which barrel would fire first.

Only if the rifle was extremely mistreated could the action malfunction and fire both barrels (bad idea).

Needlessly to say this rifle was made extremely well. The action, triggers guard and 26-inch barrel all had engravings of African game animals, but not as much as to render the rifle useless. The 15-inch European walnut wood stock was left alone without engravings except for checkering on the grip and a raised cheek rest for the shooter.

The neatest thing in my opinion was the front sight. Looking down the 26-inch barrels at its simplicity and functionality is truly great. The front sight is a blade style sight with a cover. That cover could fold back along the barrel to open up your sight picture. Then if a smaller sight was needed just fold down the larger round covering the smallest round that made up shooter’s vision of the blade sight.

It was like having three different sight systems at once. The chambering in this rifle was of a caliber not for small species of game animal but for the monsters.

The .577 Nitro was an African game cartridge meant to represent man’s place and threshold in the food chain. The rifle allowed two shots; you should only need one because it was on the honor of the hunter to be humane.

If you missed once or wounded the animal, most African game animals are bigger and strong enough to kill you instantly. It was just better to get it right the first time.

Many rifle cartridges will help you do this, especially the .577 Nitro. The .577 Nitro was probably loaded with a 750-grain projectile. These 750-grains convert approximately to 1.7 ounces of lead and copper coating. The projectiles diameter is .584 inches, and when properly set into the cartridge the overall cartridge length was 3.7 inches. This rimmed straight case cartridge and rifle combination produced around 2,000 feet/second and an impacting energy of 7,000 feet/pounds.

Cordite was used to propel the projectile. Cordite is a smokeless propellant, highly explosive and hazardous to the rifle. This rifle had no muzzle break to reduce recoil. One shot from this rifle and ammunition if not done properly has broken many collar bones in the interest of sport or a dare to tame the hand cannon. Properly handled it stopped many charging elephants and rhino.

Probably not my first choice for an African hunting safari, but a beauty to look at. The Westley Richards .577 Nitro double was accurate and well loved by an iconic man’s man: Ernest Hemingway.

Raised in the White Mountains, Wichitaw Busby has always been an outdoors and firearms enthusiast. He was a sales associate behind the sporting goods counter of Western Drug. A gentleman and perpetual scholar, Busby worked for his college education and now enjoys his employment at the public library.