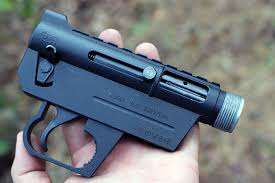 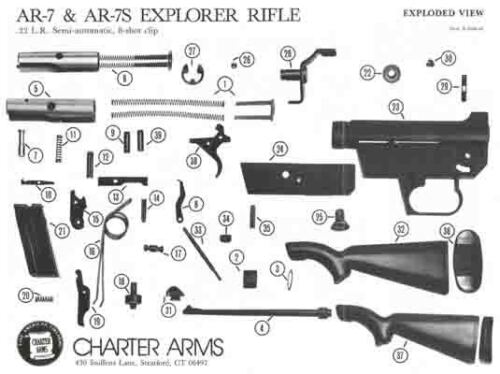 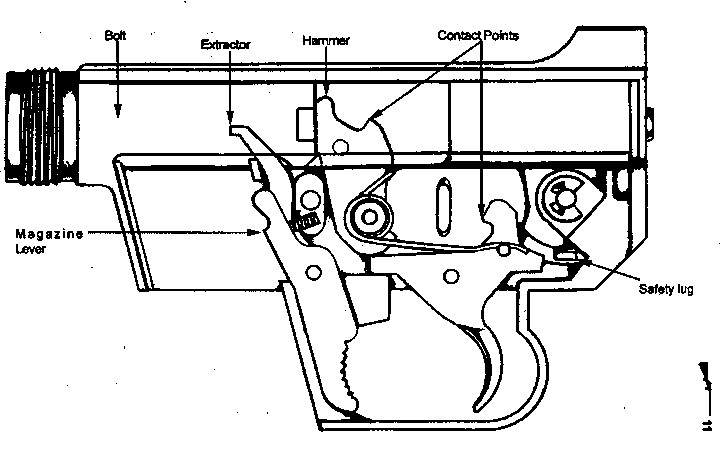 From Wikipedia, the free encyclopedia
For other uses, see AR 7 (disambiguation).

The ArmaLite AR-7 Explorer is a semi-automatic firearm in .22 Long Rifle caliber developed from the AR-5 that was adopted by the U.S. Air Force as a pilot and aircrew survival weapon.[1]
The AR-7 was adopted and modified by the Israeli Air Force as an aircrew survival weapon.
The AR-7 was designed by American firearms designer Eugene Stoner, who is most associated with the development of the AR-15rifle that was adopted by the US military as the M16.
The civilian AR-7’s intended markets today are backpackers and other recreational users as a takedown utility rifle.
The AR-7 is often recommended for use by outdoor users of recreational vehicles (automobile, airplane or boat) who might have need for a weapon for foraging or defense in a wilderness emergency.

The prototype of what would become the AR-7 was designed by Eugene Stoner at ArmaLite Inc., a division of Fairchild Aircraft.
The rifle shares some of the features of the bolt-action AR-5, another rifle designed by Stoner for ArmaLite and adopted by the United States Air Force in 1956 as the MA-1.[2]
The MA-1 was intended to replace the M4 Survival Rifle and the M6 Aircrew Survival Weapon which was a superimposed (“over-under”) twin-barrel rifle/shotgun chambered in .22 Hornet and .410 bore, using a break-open action.
The AR-5 had the advantage of repeat fire over the then-standard M6, using the same .22 Hornet cartridge.
When the AR-5 was adopted as the MA-1 but was not placed in issue due to the numbers of usable M4 and M6 survival weapons in USAF inventory, ArmaLite used the research and tooling for the AR-5 in developing the AR-7 for the civilian market.[3]

The AR-7 uses a blowback semi-automatic action in .22 Long Rifle but retains the AR-5/MA-1 feature of storing the disassembled parts within the hollow stock, which is filled with plastic foam and capable of floating.[4][5]
Like the bolt-action AR-5, the AR-7 was designed as a survival rifle for foraging small game for food. The AR-7 is constructed primarily of aluminum, with plastic for the stock, buttcap, and recoil spring guide.
The bolt is steel. The original barrel was aluminum using a rifled steel liner; barrels of some production models have used all steel barrels, others have used barrels made of composite materials.[6]
The AR-7 measures 35 inches overall when assembled. It disassembles to four sections (barrel, action, stock, and magazine), with three parts storing inside the plastic stock, measuring 16 inches long.
The rifle weighs 2.5 pounds, light enough for convenient backpacking. The rear sight is a peep sight, which comes on a flat metal blade with an aperture (in later production two different size apertures available by removing and flipping the rear sight), and is adjustable for elevation (up-down).
The front sight is adjustable for windage (side-to-side). Accuracy is sufficient for hunting small game at ranges to 50 yards.

Reliability of the AR-7 is highly dependent on the condition of the magazine and on the ammunition used, perhaps more so than with other models of semi-automatic .22 caliber rifles.
The feed ramp is part of the magazine and subject to damage from mishandling. Flat-nosed bullets tend to jam on the edge of the chamber of the barrel.
The transition of cartridge from magazine to barrel can be smoothed by minor beveling of the chamber of the barrel, by using round-nosed as opposed to flat-nosed bullets and by paying attention to condition of the feed lips and feed ramp of the magazine.
Later production magazines include an external wire spring to align the cartridge; earlier magazines used two pinch marks at the top of the magazine body, which in use could become sprung open or worn.[citation needed]
All iterations of the AR-7 from the Armalite to the Henry U.S. Survival rifle use a bolt and dual recoil springs that are heavy compared to most other .22 semiautomatics.
The AR-7 requires high velocity ammunition for reliable functioning. The manufacturers recommend use of 40 grain round nose bullets in high velocity loadings.
It is possible to manually load a single round into the firing chamber, allowing use of flat nosed bullets or low velocity or subsonic ammunition.
The barrel takedown nut tends to loosen during firing and may need hand-tightening to maintain both accuracy and reliability.
Armalite sold the design to Charter Arms in 1973. According to some accounts posted by enthusiasts, this is when quality began to deteriorate.[7]
Barrels were said to have a tendency to warp. Other sources state that the first production at Charter had problems which were corrected in later production runs.[3]

(Summary of information available in The Blue Book of Gun Values)

Armalite barrels had a steel liner in an aluminum shell. The Armalite stock did not accept the receiver with a magazine in place and the gun was normally sold with one magazine.
The receiver did not provide for a scope mount. The rear sight was a peep aperture, adjustable for elevation. The front sight was drift-adjustable for windage.

The AR-7 was also manufactured in Argentina as the Sistema de Armas .22 LR Fire de Brenta.[8] It came with various barrel lengths, shrouds and fixed rifle stocks as well as pistol grips with retractable stocks. 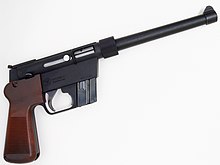 Explorer II was a pistol version of the AR-7.[10] It resembled a Broomhandle Mauser. The receiver had a built-in pistol grip with no provision for the rifle stock (the internal parts are interchangeable between rifle and pistol).
The rear sight of the pistol was an open notch adjustable for windage and elevation. The Explorer II front sight was integral with the barrel shell and was not adjustable.
The magazine well in front of the trigger guard would accept any magazine designed for the rifle. A spare 8-round magazine could be carried inside the grip.
The most common barrel was six inches. Optional barrel lengths included eight and ten inches. 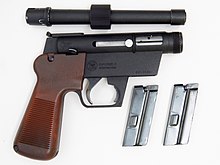 Alignment lug is on barrel underside

AR-7 Industries made solid steel barrels much heavier than the AR-7 barrels by Armalite, Charter or Henry.

In 1980, the design and production rights passed on to Henry Repeating Arms and the compact rifle was slightly revised. The AR-7 is now (2015) known as the Henry U.S. Survival AR-7 rifle. An ABS material replaced the original stock plastic, which was prone to cracking and failure.
The receiver recess in the Henry stock allows storage of receiver with a magazine in place and the rifle is normally sold with two magazines.
The latest versions of the Henry allow for storage of three magazines total, with two in the stock recess, and one in the receiver. The modern Henry U.S. Survival rifle is also water resistant.
They now include a full Teflon coating on the outer surface. A 3/8 in. Weaver Tip-off mount rail milled into the top of the receiver for attaching a wide variety of optics is now a standard feature.

Another variant was made by Armalite and sold to the Israeli Military for use as pilot/aircrew survival weapons.[12]
The Israelis further modified these rifles, adding a telescoping stock, a pistol grip from a FAL-type rifle, shortening the barrel (to 13.5 inches), and adding a front sight based on the K98k Mauser.
After Israeli service, some of these rifles were re-imported into the U.S. by Bricklee Trading Company (the barrels are marked with the BTC identification as required by U.S. laws on imported guns) for sale on the civilian market, and command a premium among collectors.
In order to comply with U.S. Federal law, a 3-inch muzzle brake had to be permanently attached in order to meet the minimum 16-inch-barrel requirement.

The AR-7 functions as a simple or plain blowback semi-automatic. The AR-7 is a light firearm with heavy bolt and twin recoil springs and must be firmly held for reliable blowback operation.

As is common with many blowback .22 rifles, the AR-7 bolt cannot be locked open to demonstrate the weapon is in a safe unloaded state. Firearms without a built-in “bolt hold-open” device may be banned from use at some firing ranges.
Other firing range operators allow use of an open bolt indicator to prop the bolt open so that the chamber is visible. The yellow plastic flag for CMP range use is recommended or a spent cartridge case may be accepted to indicate open bolt.

The fact that both the barrel and stock are detachable has led to a plethora of after-market accessories, similar to those available for the Ruger 10/22. Barrels, stocks, and grips, of varying finishes and utility, can be added to the rifle.
These include collapsible stocks, wire-framed stocks, pistol grips, flash suppressors, shrouded barrels, high-capacity magazines, telescopic sights, reflex ‘red dot’ sights and other occasionally fanciful-looking hardware, some at a cost greater than the rifle itself. Such accessories often make it impossible to use the original floating stock for storage of modified parts.[3]
The current Henry U.S. Survival AR-7 has a 3/8″ scope sight rail integral with the receiver to accept standard Weaver-style “Tip-Off” rings. For earlier makes, B Square supplied the Charter Arms AR-7 Explorer Scope Mount Base, an accessory bracket with a 3/8″ rail.
The base attached by the receiver side plate screw (the Charter Arms side plate screw is longer than that of the Armalite). This base can be used on the Armalite and the Charter Arms Explorer rifles and the Charter Arms Explorer II pistol.
However, with the base in place, the rifle receiver will no longer fit the recess in the stock for storage. (The base is not needed on the Henry version and will not fit the Henry receiver.)
Apart from the highly modified AR-7 Israeli survival rifles, most AR-7 models lack provision for a carry sling. AR-7 owners have adapted slings designed for use on guns without modification, such as universal shotgun slings designed to cup the shotgun buttstock at the rear and clamp to the barrel or magazine tube at the front.
Given the light weight of the AR-7, 2.5 pounds, a proper length of parachute cord with a slip knot at either end can be used as a sling or lanyard.