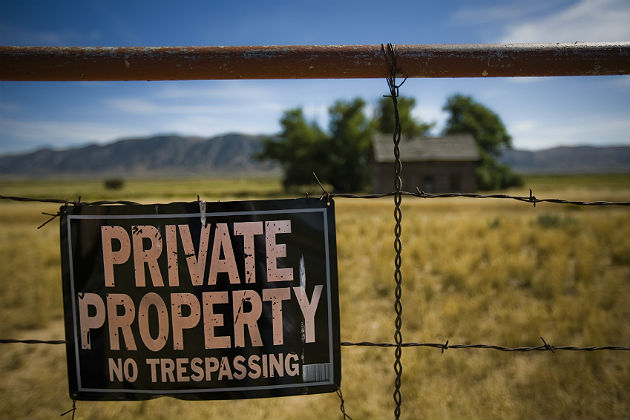 Obviously, you will want to gain access to some land with good hunting prospects. But beyond that, you’ll also want to seek out the landowners who are most likely to grant your request for hunting privileges.
This might mean avoiding houses that are in close proximity to large population centers and major roads. Those landowners likely have hunters beating down their door asking for permission.
However, landowners who live on back roads and other out-of-the-way places probably don’t get as much attention from hunters. Your odds of getting permission to hunt on those pieces of land are probably higher.

Once you find a couple of pieces of private land you think offer good prospects for getting access, you’ll need to get in touch with the owners somehow. If at all possible, don’t wait until right before hunting season begins to start asking permission. Instead, try to get in touch with prospective land owners as early in the year as possible.
For one thing, this will allow you to get permission to hunt a piece of land before other hunters ask first. Another reason to ask early is to assist in getting your foot in the door before hunting season actually starts (more on that later).

Once you’ve located the landowners, you then need to get in touch with them. This can be tricky, and you need to be prepared to have a few people say “no” to your request for hunting access.
One good way to get in touch with the landowners — especially if they do not actually live on the land on which you are asking permission to hunt — is to send them a letter. If you found them through the county records office, you should have the name and address. Simply mail them a letter introducing yourself and ask to set up a time to meet face to face.
Other people prefer to initially meet the landowner face to face, and there is nothing wrong with that either. Regardless of whether you have made contact with the landowner in some other manner beforehand, it is usually best to arrive alone. Showing up with a whole truck full of friends who want to hunt as well is probably going turn the landowner off.
That being said, there is usually nothing wrong with bringing along a child or spouse with whom you intend to hunt. In fact, the presence of a child or spouse might even increase your odds of getting permission from the landowner.

When you arrive to meet with the landowner, make sure that you either arrive right on time (if you have an appointment), or that you arrive during the day and outside of regular meal times (if you arrive unannounced). In either case, make sure you look the part when you arrive.
You don’t want to appear disheveled or dirty, as a landowner might be inclined to believe a person who looks like a slob won’t respect the property. By the same token, you probably shouldn’t be wearing a suit either.

One good way to get hunting access on a person’s property is to start small and build a relationship with him/her. For instance, ask for permission to hunt predators or varmints, such as coyotes. Other landowners might be hesitant to allow you to trophy hunt, but have no problem with having you shoot a doe or two.
In any case, once they know you and see that you respect them and their property, most landowners will be more inclined to give you permission to hunt other animals on their land later on. This is another reason why it is so important to start early in the year when trying to get permission to hunt on private property.

Always carry some easy way to deliver your contact information to the landowner, such as a business card or an index card with your name and phone number. Even if you don’t get permission to hunt, the landowner might change his mind later or he might have a friend who is having problems with deer getting into the garden and wants them shot.
Either way, it is to your benefit for the landowner to have a way to contact you after you leave.

Be gracious and show respect

Regardless of how it goes, always be courteous and polite when asking for hunting access. If the landowner declines to give you permission, thank her for her time and leave. If you do receive permission to hunt, make sure that you treat the land with respect and obey any rules or conditions the landowner gives you.
Offering to share some of your venison, sending a “thank you” note, and adding the landowner to your Christmas card list are all good ways to stay in his good graces and go a long way toward keeping permission to hunt on that land in the future.
By the same token, acting like a jerk is a great way to lose permission to hunt on a piece of property and might even get you put on a black list with the landowner’s friends as well.

I allowed (A) trapper on my property because he did almost verbatim what you’ve written.

I seriously can’t tell you how many I have chased off because…Merca, Freedom, “It aint your land” (REALLY?? I pay
The GD Taxes!!) or some other lame ass excuse.

The worst was a dude fishin, obviously intoxicated, walkin at
Me aggressive like, till I showed his ass a G17.
Wnd of that BS Rickty Tick.

I am REALLY sorry about your troubles friend. I wish I had a good answer for you about it. Good Luck is all that I can say. Grumpy