Big bore guns are a way of life in Alaska. Whether handgun or rifle the need is the same: stopping large animals quickly. Wild West Guns began building the Co-Pilot lever gun over 20 years ago. The take-down rifle is designed to easily fit in a plane, boat, vehicle, pack, or scabbard and stop the largest of North America’s game. 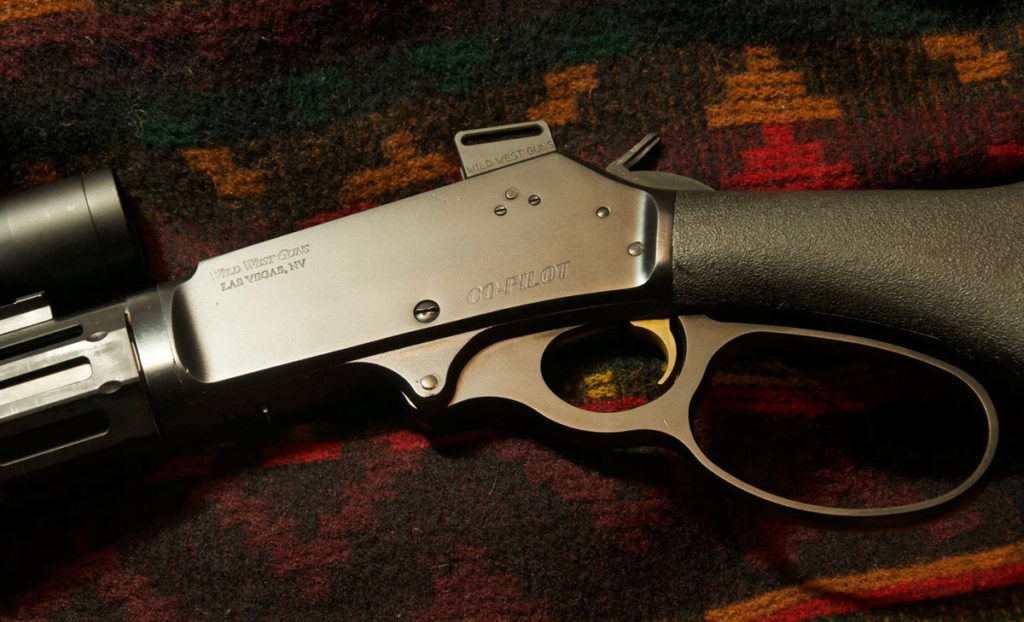 WWG takes a standard stainless steel 18” barreled Marlin 1895 lever gun and works it over from one end to the other. Assembled, the Co-Pilot’s overall length is 36 ¾ inches. In just a minute’s time, it is in two halves. The longest half is 19 inches, which is small enough to fit in a leather or canvas satchel or pack.

The take-down feature is accomplished by adding a plate to the rear of the barrel half that holds the barrel, forearm and magazine tube assembly, as well as the barrel-mounted scout scope. The plate acts as the mating surface to the machined front of the receiver. The magazine tube is held in place at the muzzle end by a thumb screw threaded into an insert in the bottom of the barrel.

Unscrewing the thumb screw allows pulling the magazine tube out past the muzzle, which pulls it out of the receiver, allowing the barrel section to unscrew from the receiver. The bottom end of the magazine tube is tapered and acts as a large alignment pin to center the barrel section with the receiver. The clearance between the mating faces of the two sections is almost nonexistent and unnoticeable if you’re not looking for it. 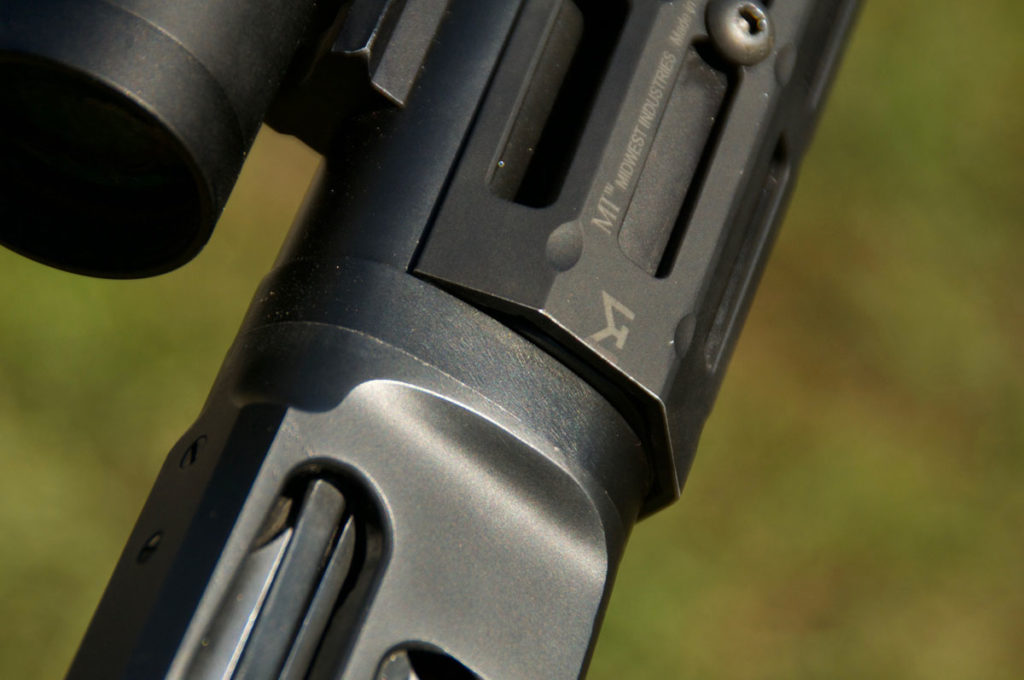 The barrel threads into the receiver to rigidly hold the two halves together. The magazine tube fits into the recess of the receiver, locking the halves. All the work on the alignment, mating surfaces, and threading enhances the accuracy of the Co-Pilot and makes it a compact travel package. 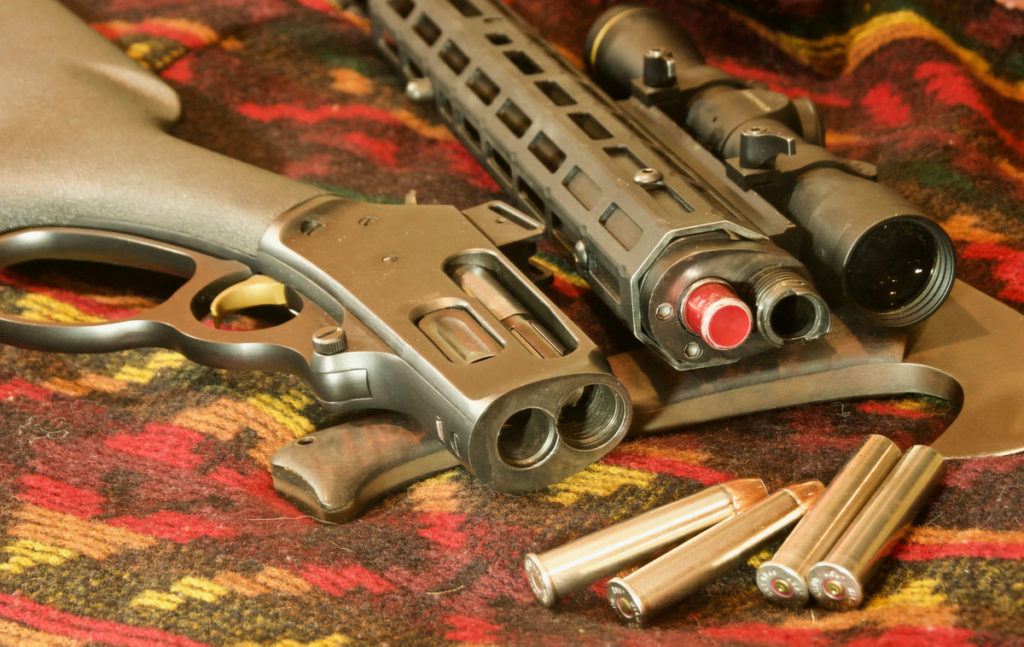 The work done on the Co-Pilot does not end at the take-down feature, which is just the beginning. To say the action of the Co-Pilot is smooth would be an understatement. With some factory guns, you can almost feel every process happening when you cycle the lever through the range of motion. This is not the case with the Co-Pilot. The action glides through the lever stroke swiftly, smoothly, and reliably. The large cases feed in and out of the action as if they were greased.

I was lucky enough to take the Co-Pilot on a hog hunt and though the hogs were nowhere to be found during the day, I did get to try it out on a couple after darkness fell. During the heat of the moment, while firing three shots at a running hog, I didn’t even notice that I was shooting a lever gun instead of my usual semi-auto. The action is that smooth and reliable.

After downing the second hog I found myself checking the action to make sure I had chambered a fresh round and was ready for another. Both hogs were in the 140-150 pound range and never made it 50 yards before dropping.

The lightning-fast handling nature of the gun made it a pleasure to carry and use for the hunt. At less than eight pounds it was no problem carry for miles of walking, stalking, waiting and watching during the day or for the stalks to the hogs when we located them at night. I guess I need to invest in a .45 caliber suppressor because the thunderous roar that it lets out in the still of the night would make Thor himself tremble. 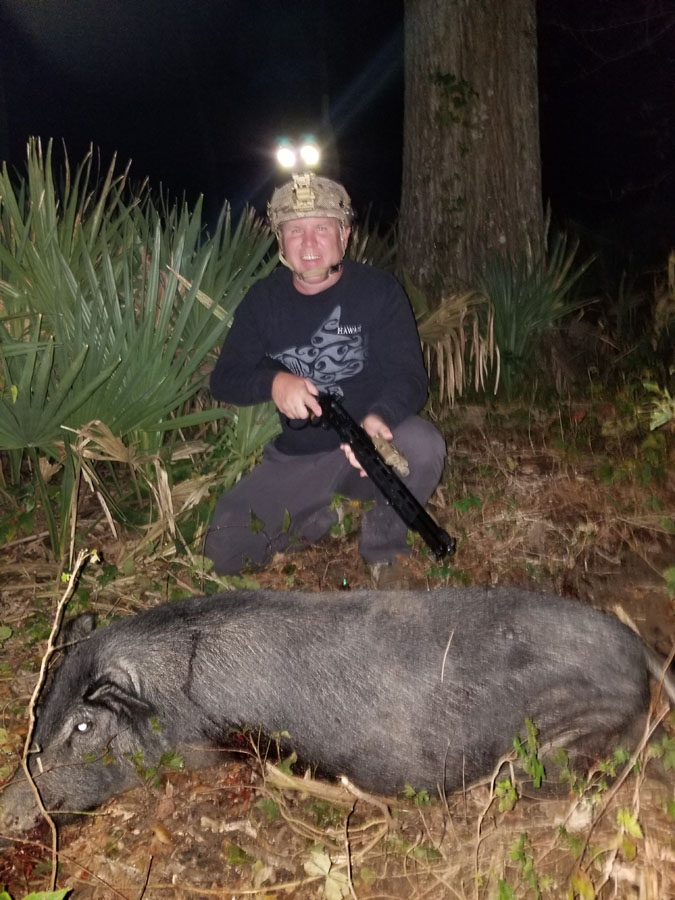 Friends with cool equipment helped put the Co-Pilot to the hog test.

The Co-Pilot obviously uses a WWG big loop lever, trigger, and ejector. The action has been polished and tuned to give the best performance possible. The trigger broke cleanly at 3 lbs. That’s the kind of trigger that you don’t typically find on lever guns. The fine trigger made breaking shots at the running hogs reflexive rather than a conscious action, and instantly it was ready to shoot again—never a glitch or hang-up of any kind in feeding or ejecting. 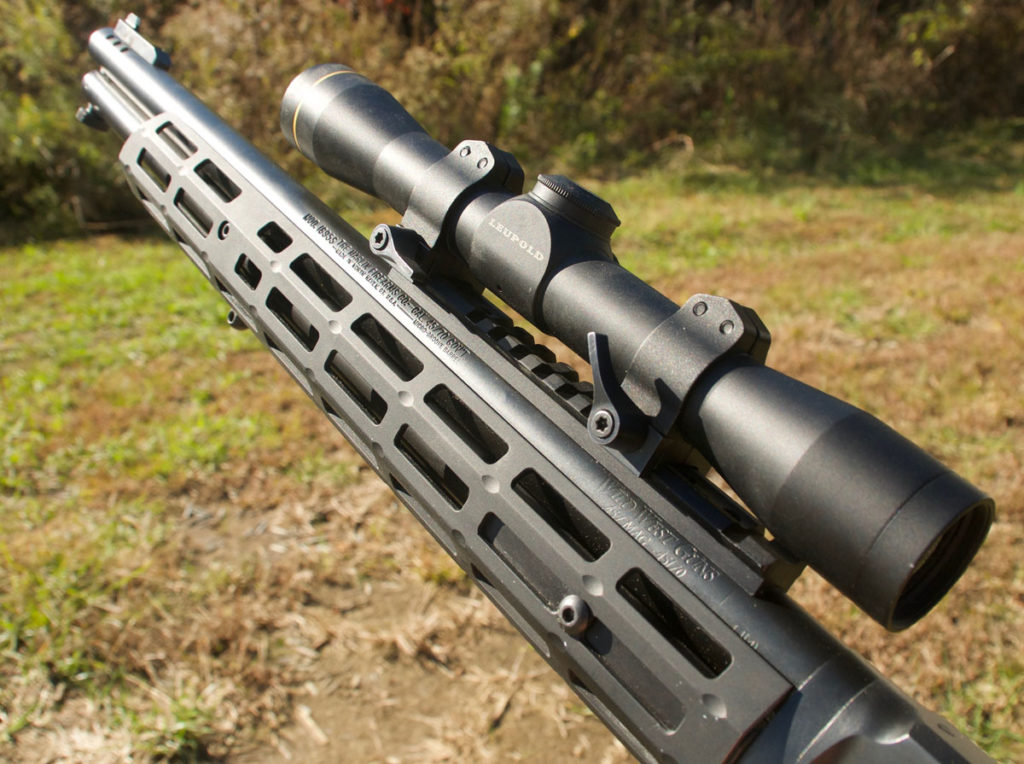 The Co-Pilot can be had with a standard handguard or the modified Midwest Industries tactical style as on the test gun. The forearm can be used for mounting lights, lasers or whatever accessories the user needs. 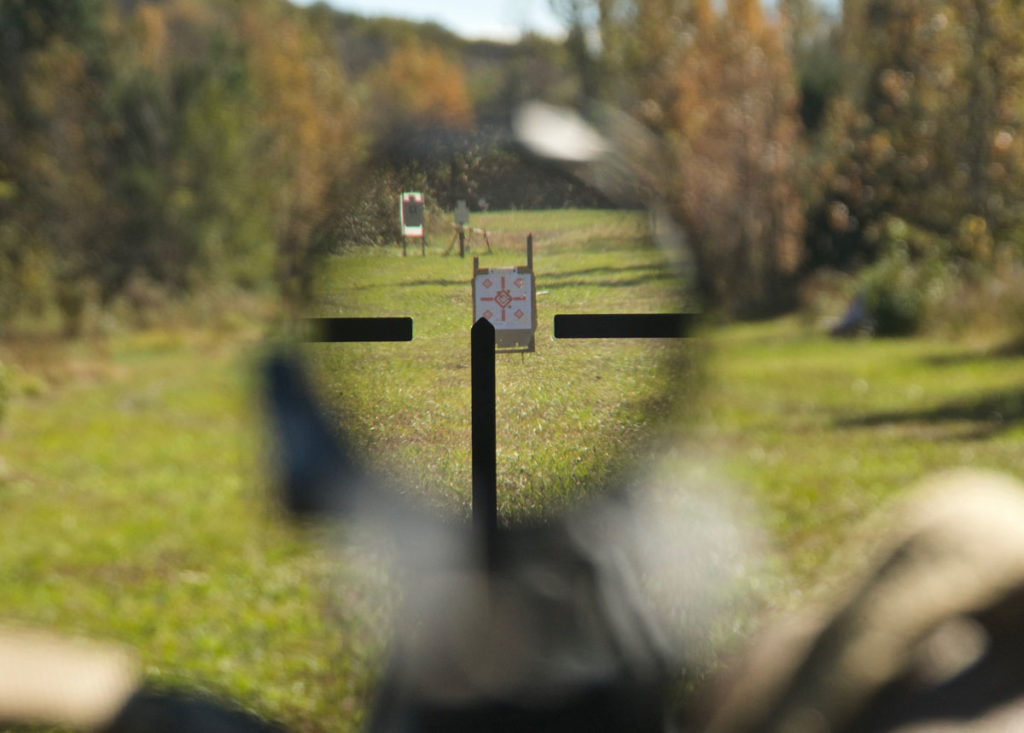 The thick reticle was quick to pick up and excellent for engaging close range targets.

The Co-Pilot utilized a Leupold FX-II 2.5x 28mm Scout style scope. The low power and heavy reticle of the Leupold aren’t made for long distance shooting; they are designed for up-close quick shooting. This scope weighs only 9 ½ ounces. The lightweight helps maintain a nice balance on the rifle and keeps the handling more like an iron sighted gun than a top-heavy scoped one.

The heavy coarse reticle doesn’t mean that the Co-Pilot isn’t capable of shooting well. The Co-Pilot shot almost one hole groups at 50 yards with Hornady 250 grain 45-70 LEVERevolution ammunition. The flyer was probably due to the reticle and my focus. The Remington 405 grain bullets shot almost as well the Hornady 45-70 loads.

The test gun was chambered in the SAMMI approved 457 WWG cartridge, a longer variant of the original 45-70 chambering. The 457 WWG packs in some extra punch for those potential close encounters in heavy brush. In addition, the 457 WWG chambering still allows shooting the 45-70 Government cartridge and also single loading 2 1/2 inch 410 shot shells for close range small game or pests. 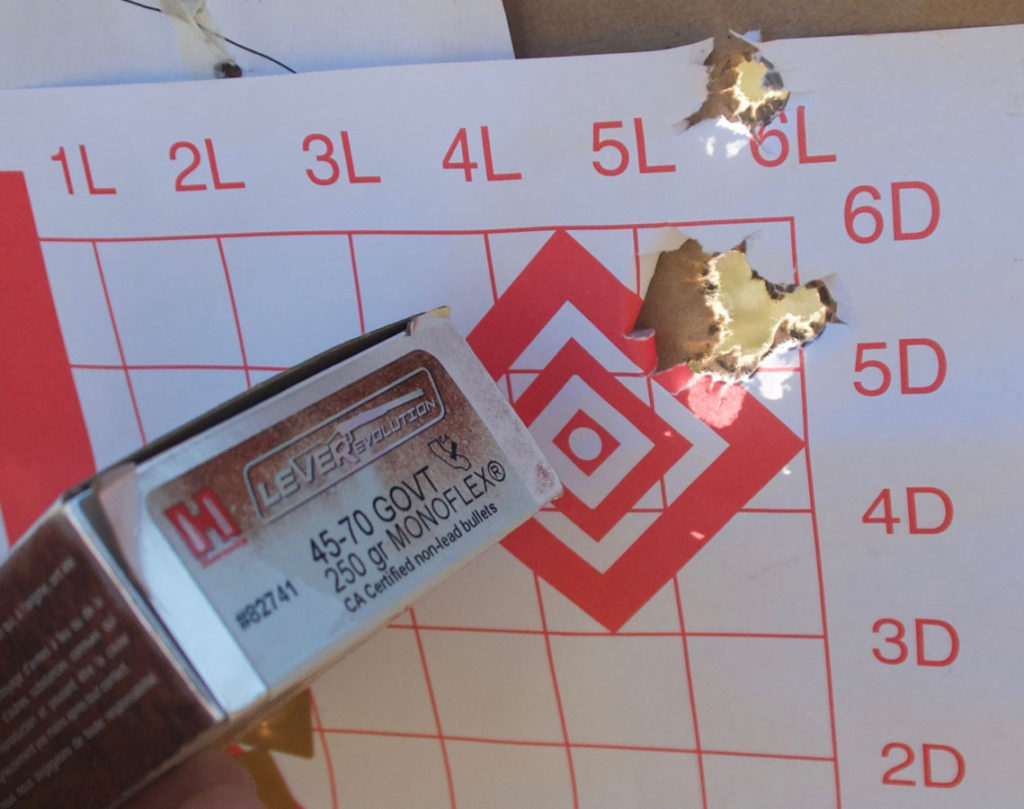 The Co-Pilot shot some amazing groups with multiple ammunition types and easily hit steel out to 150 yards.

The 250 grain Hornady load, which is sufficient for hunting most game, was actually pleasant to shoot in the Co-Pilot. The barrel porting and Pachmayr Decelerator recoil pad working together even tamed the 350-grain Corbon WWG loads allowing me to shoot reasonable groups. I have certainly shot less comfortable guns and felt that for the energy of the rounds and weight of the rifle it performed very well.

The energy of the Corbon 457 WWG load is something worth a quick look in itself. At 4112 ft-lbs. of muzzle energy, it is in the class with the 300 Weatherby and 338 Winchester Magnum rounds. This is about 2 ½ times the energy of the original slow moving 405 grain 45/70 loads; impressive power in a light-fast rifle. 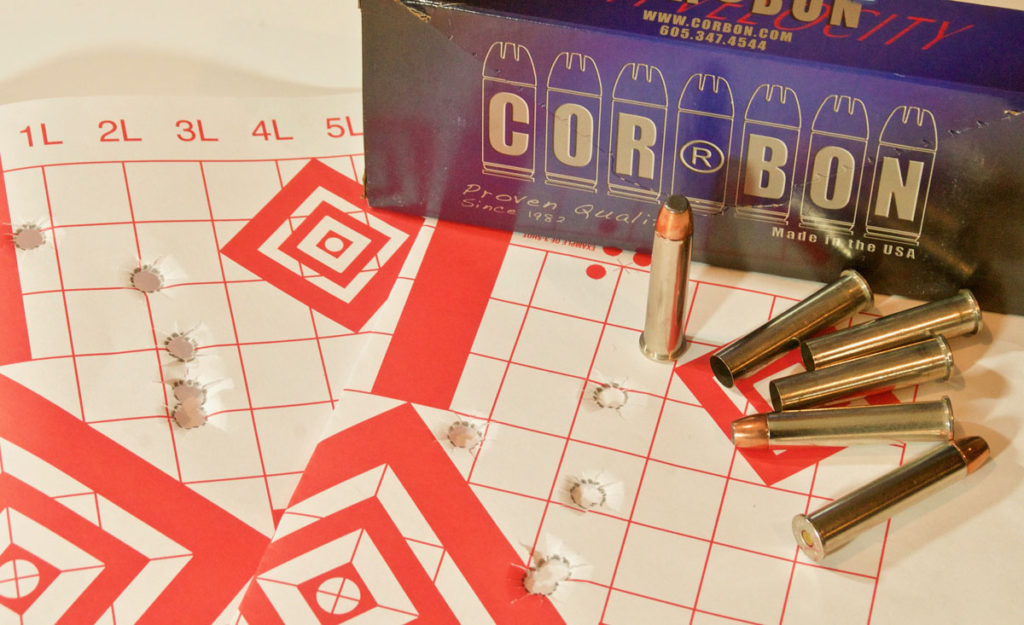 Even with the low power optic and thick post, hunting accuracy is no problem for the 457 WWG Co-Pilot.

Due to weather and time constraints, the 457 WWG loads were shot for groups as darkness was falling and I know I did not do it justice. I feel I had some variance in getting a consistent hold with the point of the reticle on the target center as the light was fading and this probably accounts for the vertical stringing of the groups. My apologies to the Wild West Team.

Due to the wide range of bullet weights and velocity differences, the point of impact for every load tested was several inches different. So as always be sure to zero with the ammunition you will be using on a hunt and tailor the bullet type to the game you will be shooting.

The difference in length of the high energy 457 WWG rounds and the Hornady brass cases is easily seen here.

The Co-Pilot can be had almost any way you want it, from finely engraved with beautiful wood to finished with the most durable coatings to keep it working in the harshest environments. The gun I tested was a Black Nitride finished stainless steel rifle with a composite buttstock, though mostly they sell stainless with laminated wood stocks carrying the WWG’s logo. You can have it with a ported barrel such as the test gun or without ports and threaded for use with a suppressor. You can literally have it your way. 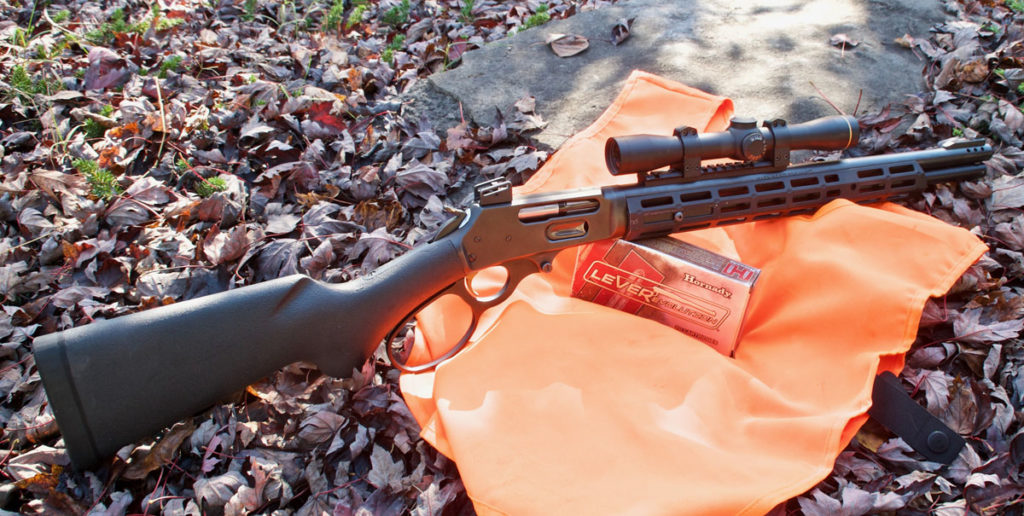 This no-nonsense performer is ready to hunt anything you are.

The Wild West Guns Co-Pilot is a short, light, fast handling, accurate, easily shootable, hammer of a rifle that has an awesomely smooth action, fine trigger and easily disassembles down to a compact travel size package. The workmanship is obvious in the tuning, precision, and assembly of the rifle.

We don’t all have a float plane so it may not be a gun we all need, but if you’re a lever gun fan, it’s surely one you will want. I hate to send it back. This design is all about function and performance.