Wilson, last seen in Thailand, is now considered a fugitive by US authorities

Defense Distributed founder Cody Wilson — known for his fight with the US government over 3D-printed guns — has been charged with sexually assaulting a minor, according toThe Austin American-Statesman.

The Statesman reports that police filed an arrest warrant for Wilson today in Travis County, Texas, alleging that a girl under 17 years old (the state’s age of consent) said Wilson paid her for sex after meeting on a site called SugarDaddyMeet.com.
The Statesman reports that jail records show Wilson had not been booked as of Wednesday morning, but police had corroborated the story with hotel records and surveillance footage. Wilson did not immediately respond to a phone call requesting comment.

According to the Statesman, Wilson began corresponding with the girl (whose identity has not been revealed) in August under the name “Sanjuro.”

He then revealed his name and described himself as a “big deal,” and the pair allegedly exchanged nude photos before meeting at an Austin coffee shop on August 15th, then returning to a hotel room.
The girl later told a counselor that she had been paid $500 for sex with a 30-year-old man, and the counselor reported the incident to police, who interviewed the girl in late August and identified Wilson from his account profile pictures.
The affidavit for the arrest warrant states that Wilson is charged with second-degree felony sexual assault. 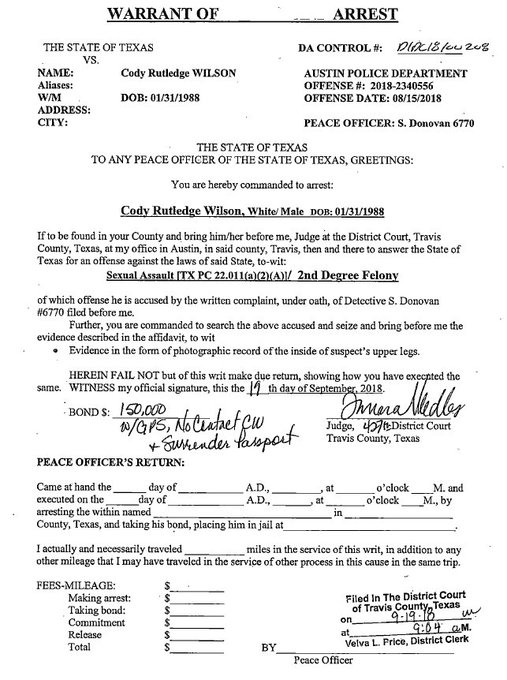 A very detailed affidavit for arrest warrant in Travis County, Texas, alleges 3D printed gun blueprints maker Cody Wilson met a 17-year-old girl through http://SugarDaddyMeet.com , and they had sex in an Austin hotel.

In a press conference Wednesday afternoon, the Austin Police Department stated that Wilson’s last known whereabouts were in Taiwan, where he had skipped a flight back to the United States. “We don’t know why he went to Taiwan, but we do know that he was informed that he was being investigated,” said Commander Troy Officer, according to Ars Technica.

Officer also said that the victim was 16 years old, and that detectives who had interviewed the girl found it unlikely that Wilson would have mistaken her for someone over the age of consent. “If someone mistakes their age, it’d be because she’s younger not older,” he said.
Austin police are now cooperating with US Marshals and international partners to arrest Wilson.

Later on Wednesday evening, the US Marshals Service released a “wanted” posted for Wilson, detailing the charge against him and encouraging people to contact the Lone Star Fugitive Task Force with information about his whereabouts, according to reporter Tony Plohetski for the Austin American-Statesman: 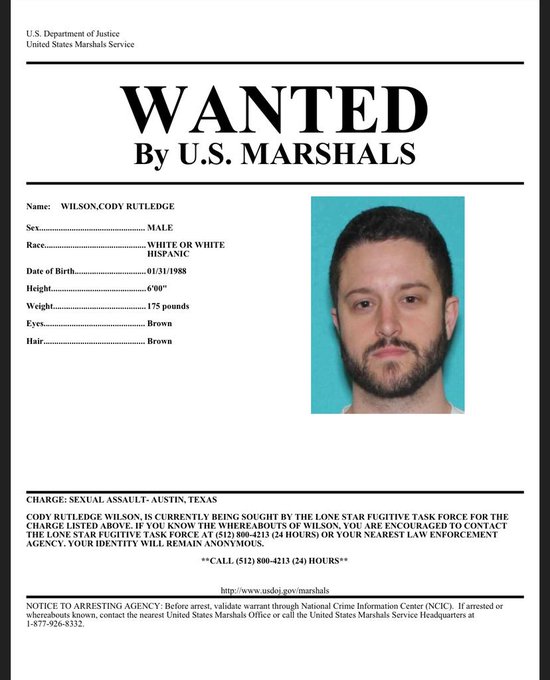 Wilson, who describes himself as a crypto-anarchist, has fought a years-long battle to distribute blueprints for 3D-printed firearms in an attempt to make American gun regulations unenforceable.

His company Defense Distributed developed a working 3D-printed single-shot pistol called the Liberator in 2013, drawing the attention of the State Department, which ordered him to pull the blueprints offline.
Wilson later sued the government, and the case went to a settlement in mid-2018, granting him the right to distribute printable gun files, which he eventually started doing last month via flash drives.

Wilson has also worked on a cryptocurrency project called Dark Wallet and is the creator of Hatreon, a currently defunct crowdfunding platform that supported “alt-right” white nationalists who were kicked off more mainstream funding sites like Patreon.

Update 9/19 8:22PM ET: Updated with details about Wilson now considered a fugitive by the US Marshals Service

________________________________
Okay let me get this right. A Man makes something the Government really does not like. So it does its best to stop him. But the Man puts up one Hell of a fight over it. Right so far?
However the Man then does something really stupid. By letting his little head do his some of his thinking, With a 16 year old Hooker no less.
I am also willing to bet that if she was a 17+ “girl”. There would not be a problem here. I also hope that she gave him a hell of a good ride for his $500.  But I kind of doubt it. However that is another story for another day.
So call me Cynical, But here is how I see it so far.
Because of this stupidity.  The Feds then sees their chance to nail this Old Boy & make him a guest of the State.
But The man, who has been probably tipped off by somebody. Wisely flees the scene by going to Asia. Before they can introduce him to his cellmate called Bubba & tossing the salad.
(You really do not want to know what that means by the way!)
We also will soon find out how much cash the guy has & how quickly it disappears then the G Men are after you!
Bottom Line – This sounds and smells like a huge pile of brown sauce to this old fart.
Anyways, Your comments are welcome by the way!            Grumpy