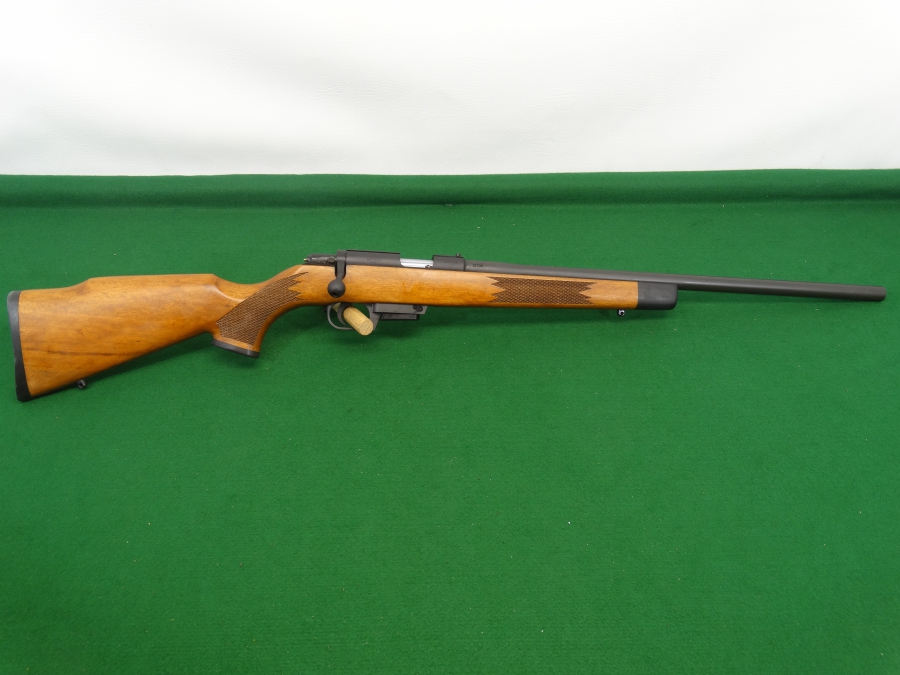 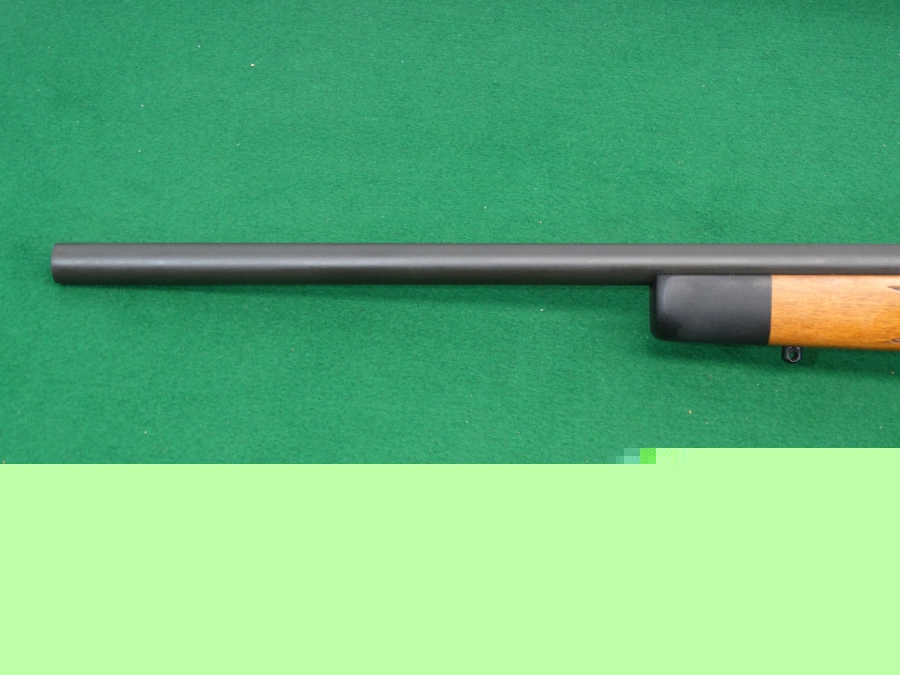 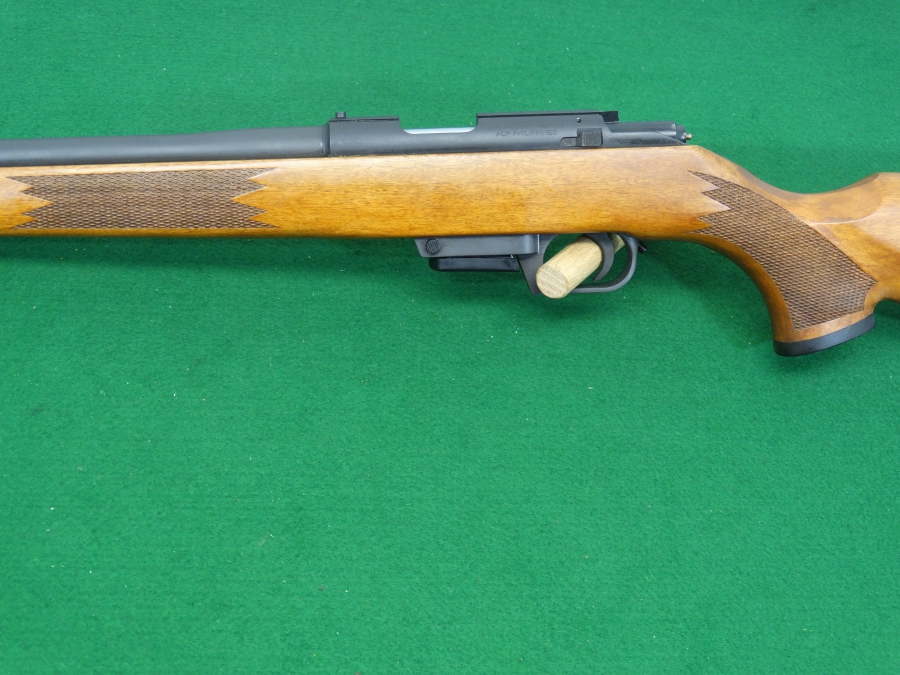 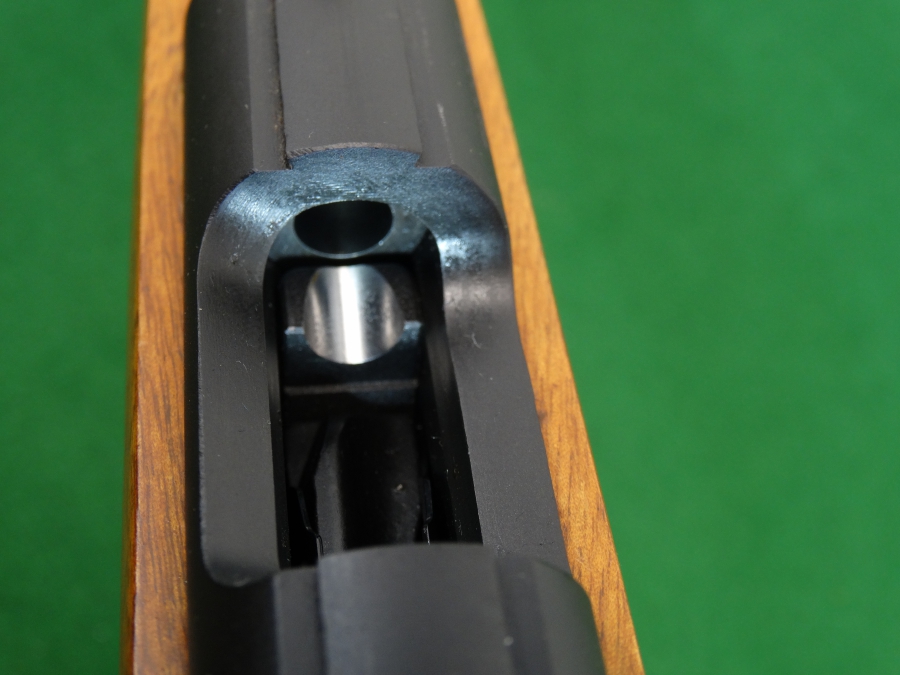 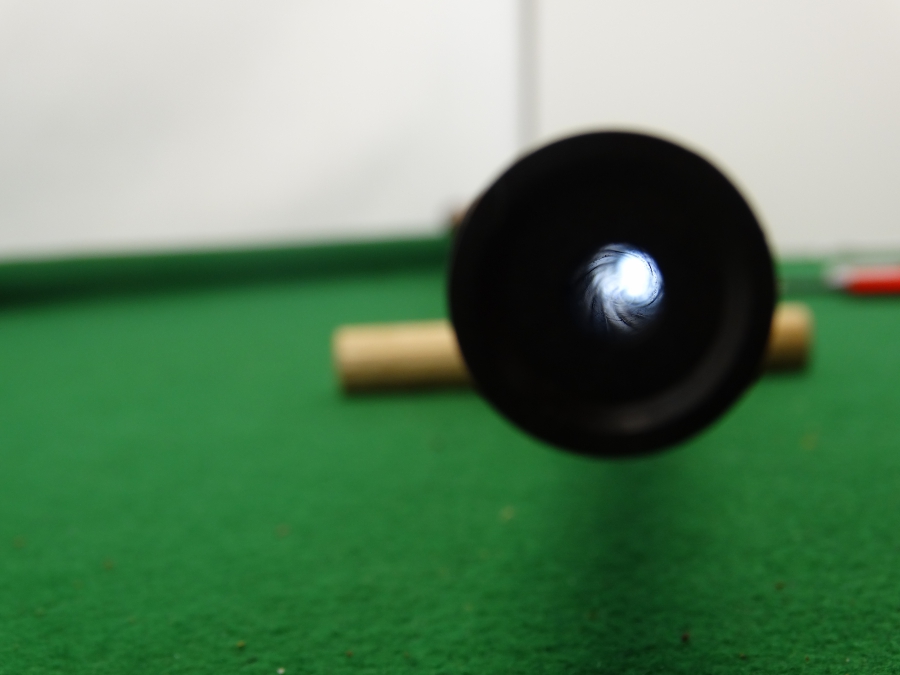 The .22 TCM or 22TCM (.22 Tuason Craig Micromagnum) is a proprietary bottle-necked cartridge created from a 5.56 NATO cartridge developed by custom gunsmith Fred Craig and Rock Island Armory (RIA) for semi-automatic pistols and the Rock Island M22 TCM bolt action rifle.
Before the cartridge was commercialized, it was called the 22 Micro-Mag. Similar conceptually to other bottlenecked pistol cartridges such as the larger-caliber .357 SIG, the .22 TCM trades bullet mass for increased velocity and lowered recoil.[1]
Based on the 5.56×45mm NATO case and shortened so that the shoulder is at approximately the same length as a .38 Super Cartridge.
The .22 TCM is somewhat longer than the ubiquitous 9×19mm Parabellum and designed to be fired from a RIA line of weapons (which also included 9mm barrel swaps) fed by Para-Ordnance-style double-column .38 Super magazines.
A sub-variant, the 22 TCM 9R, with a shorter, more deeply-seated bullet, is designed for use in Glock magazines limited to standard-length 9mm cartridges. Standard factory loads are 40-grain jacketed soft hollow point, 39-grain for “9R”. 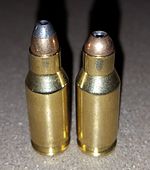 The .22 TCM 9R (right) uses a shorter bullet than the regular round (left). In 2014, Rock Island Armory released not just a new handgun, but a new cartridge for the handgun, the .22 TCM. Slowly gaining acceptance, the new round was found to be excellent at varminting with its high velocity. To compliment this and the new handgun, Rock Island released a new bolt-action rifle the M22 TCM BA. Confident in their offering, RIA sent TFB a rifle for review and we put it through our paces.

Does the M22 TCM BA hold its own in a world replete with inexpensive bolt actions, especially with the 22 TCM? Read below to find out.

Rifle Overview
The rifle itself is a muted statement, and looking from the outside is nothing special, which I believe is exactly what Rock Island Armory was going for. They wanted an understated rifle that appeals to everyone and offends no one, which they executed perfectly. The monte-carlo stock is actual wood (very hard to find these days, especially in the pricing category) featuring checkering at the forestock and and actual grip. Accents are black, including the grip cap, forward and rear sling mounts, and rubber butt-pad. The forestock tip is nicely dyed to a dark ebony.
The M22 is a standard right-hand operation bolt-action rifle. The bolt knob is a large and rounded affair, shaped for scope clearance. The bolt itself is left bright metallic, featuring a fixed ejector and spring external extractor. The bolt does not lock into the breach, instead the rifle opts for the charging handle to house the locking lug. Bolt removal is simple; rotate the charging handle and pull to the rear while depressing the serrated bolt release on the left-hand rear of the receiver. Easy to see the controls and contoured knob.

The 22.75″ barrel is complete free-floated, using a standard target taper profile. The chamber itself features a polished feed ramp (nice touch) for feeding from the 22 TCM pistol magazines (5 round flush-fit is included, but the rifle feeds from any of the standard or high-capacity 22 TCM handgun offerings). No last-round bolt-hold open is present, but the magazine does have a cut out. Magazines are inserted from the bottom through the mag well directly in front of the trigger guard. For speedy magazine changes, the shooter can index the magazine off the trigger guard and insert, although removing magazines is not easy, as the magazine does not fall-free depressing the gritty 1911-style magazine catch.
The trigger is relatively thin, with no chamfering on either side. Despite this, its a comfortable affair with the deep vertical serrations catching a finger easily. The safety is a forward-reverse toggle switch easily accessible by the right thumb. Push forward for fire, pull to the rear for “safe”.
The 22 TCM Cartridge The rifle features Armscor & Rock Island Armory’s new 22 Tuason Craig Micromagnum round (previously called the 22 Micro-mag in development), which is a shortened .223 / 5.56 Nato case. The round uses .224 diameter bullets and was designed to feed reliably in SMGs and handguns while still using common diameter bullets. Currently, only Armscor manufactures the rounds. Clear gel has shown it to be a quick little thing:

Shooting the M22
For testing, the rifle was fitted with a Hawke 22LR 3-9×40 scope mounted via UTG rings. While higher-class optics were available, I figured typical users would not put on $1,000 glass on a $400 rifle. As it turns out, the combination was excellent, especially with the optic’s reticle (more on that later).
Authors’ note: Typically, TFB writers furnish their own ammunition for testing. However, Armscor/RIA provided the 22 TCM ammunition for testing. 22 TCM  is not something easily sourced from local stores. All ammunition tested was 40 grain hollow-points, rated for 2800 fps using the exact rifle tested. Armscor/RIA provided 600 rounds for testing. All rounds were fired. The magazine included with the rifle is a shortened version of the double-stack 22 TCM magazines used in Armscor/RIA’s 1911 handgun series. Loading was easy all the way to the maximum capacity of 5 rounds. Upon insertion, the rounds go into battery with relative ease (don’t baby the rounds, get them in the chamber). The rifle does have a cocked indicator, an easy silver nub coming from the center of the black bolt (but no loaded chamber indicator). From there, take of Safe, pull the trigger, cycle the bolt, and repeat. Accuracy testing the rifle. No, the rifle was not tested resting on the barrel. All shots were supported on the stock and foregrip.

Accuracy testing was conducted indoors at 50 yards. The shooter was in a sitting position using a caldwell adjustable rest for the front of the rifle and a bean-bag to the rear. It was not ideal, but the rifle performed admirably, putting up consistent .5″ and under groups at 50 yards. Extrapolated to 100 yards, the rifle is a MOA shooter. Groups did open up after the barrel got hot (not just warm), which took nearly 75 rounds. Base groups while cold & warm at 50 yards. Opening up a bit once hot, but still excellent for what is cross between rimfire and a .223

Of note, the trigger was particularly good for a rifle at the M22’s price point. The deep serrations caught the finger well, to the point the shooter should reset the finger versus attempt to move it on the surface. I like that. The pull is utterly fantastic. Single stage with no creep, slack, take-up, etc. It just breaks at 5.1 lbs (averaged with Lyman digital gauge). Over-travel is present, but not more than what is needed. Personally, I like the higher weight as hair-triggers haven’t jived with me after military training where I do like shots to (nearly) surprise me).
During normal operation of the rifle, I did not have any feeding issues, but when slowing the action down, the fixed ejector became an issue. If one does not pull the bolt back with sufficient force, the ejector will just pop the round off the extractor with slight rotation causing a stove-pipe. In short, run the gun, don’t walk it. Throughout the day, with nearly 300 rounds fired, I did encounter two dud rounds, which when repeatedly stuck still did not ignite. Got to rack the action to give the ejector some force to eject the round. If not, it will lay on top and cause a malfunction.

Taking the rifle outdoors, it was an easy weapon to handle. The two sling mounts made it easy to transport and the flush magazine ensured it did not bang into my back during transport. Using the Hawke rimfireoptic, I found the optic good for ranging targets, just not at the 22LR indicated ranges. Using a zero a the 75 meter mark, the 50 became the 75 and other crosshairs suitable adjusted from there. While not the intended use of the scope, I was ringing 200 yard 4″ steel plates without issue.
My only real gripe on using the rifle boiled down to the interface with the optic. While Rock Island did set up the bolt handle to clear the rear of the scope, once past its guide rails on the receiver, the handle would rotate further up and hit the side of the optic. While not functionally detrimental, its annoying to now have the scrape on the glass.
Despite this, the scope did allow me to ping some annoying critters with boring regularity out to 50 yards. In this respect, the excellent accuracy made it easy to hit 1″ critter noggins and the 40 grain hollow-points were devastating. 2800 FPS is more than enough energy to make a squirrel into “pink mist” which I suspect was the designers intent.  Heck, according to Legally Armed America, it can take a hog.

Final Thoughts:
As a stand-alone rifle, the M22 TCM BA ticks the right boxes. Accuracy is excellent due to good free-floating barrel and a great trigger, the bolt cycles smoothly, decent wood stock, uses removable magazines (which as a bonus are compatible with the handgun series) and features easy scope mounts which hold zero. Adding in the retail price at $454, its a veritable bargain assuming it is any standard caliber.
But, the M22 TCM BA is not a standard caliber. Its the rifle addition to Armscor .22 TCM line. In my testing, the round has shown excellent performance with great accuracy and at over 2800 FPS with a 40-grain projecting, took care of squirrels and pests right-quick. But, its still not a standard caliber. Currently, only Armscor is manufacturing the caliber and while decently priced ($.36/round via common ammo sources), means limited supply (or on the other hand, means excellent supply in a panic, as most go for the common caliber). To me, the ultimate choice to buy one would boil down to one’s desire for the caliber, which I have not had the pleasure of shooting any of the companion TCM 1911 handguns.
So, divorcing myself from the caliber for a moment and reviewing the rifle on its own merits, I would recommend it. It shoots well, recoil is barely above a hyper-velocity 22LR, and has the right looks.
Put another way, the rifle is good enough that the only decision one needs to make is if 22 TCM is right for them.