Today’s gun control and confiscation rally was nothing new. Nazis and leftists have been using children for decades in their attempts to take guns away from law abiding citizens.

Here’s a history lesson for young adults in America – Hitler’s regime took away guns from people in Germany and then herded those they did not like into boxcars and shipped them to concentration camps where they were enslaved, beaten, raped and murdered. The victims didn’t fire a shot in self-defense because their guns were taken away.
Hitler said –

“These boys and girls enter our organizations [at] ten years of age, and often for the first time get a little fresh air; after four years of the Young Folk they go on to the Hitler Youth, where we have them for another four years . . . And even if they are still not complete National Socialists, they go to Labor Service and are smoothed out there for another six, seven months . . . And whatever class consciousness or social status might still be left . . . the Wehrmacht [German armed forces] will take care of that.”
—Adolf Hitler (1938)

Hitler knew how important it was to indoctrinate the young to the Nazi cause early in their lives. Today’s liberals are no different.
Hitler’s Nazis also knew that the registry, confiscation and outlawing of guns was necessary to control the masses and to prevent individuals from standing up against the state. According to the National Review –

The perennial gun-control debate in America did not begin here. The same arguments for and against were made in the 1920s in the chaos of Germany’s Weimar Republic, which opted for gun registration. Law-abiding persons complied with the law, but the Communists and Nazis committing acts of political violence did not.
In 1931, Weimar authorities discovered plans for a Nazi takeover in which Jews would be denied food and persons refusing to surrender their guns within 24 hours would be executed. They were written by Werner Best, a future Gestapo official. In reaction to such threats, the government authorized the registration of all firearms and the confiscation thereof, if required for “public safety.” The interior minister warned that the records must not fall into the hands of any extremist group.
In 1933, the ultimate extremist group, led by Adolf Hitler, seized power and used the records to identify, disarm, and attack political opponents and Jews. Constitutional rights were suspended, and mass searches for and seizures of guns and dissident publications ensued. Police revoked gun licenses of Social Democrats and others who were not “politically reliable.”

Next Jews and enemies of the state were shipped to concentration camps and murdered.  It’s reported that when Hitler signed gun control legislation he surrounded himself with children as a backdrop – 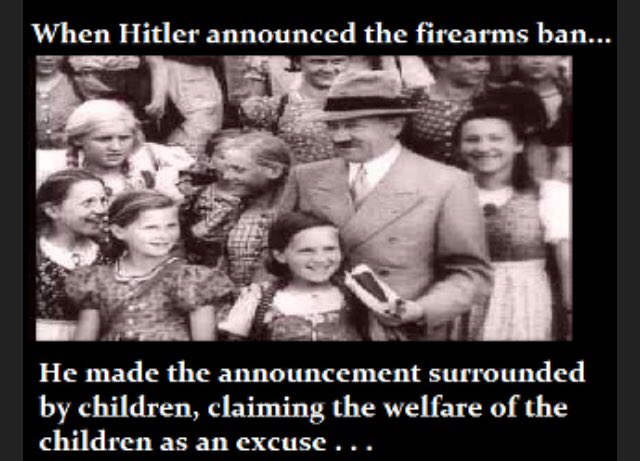 Leftists and Nazis can’t take away guns from law abiding citizens without using children as a backdrop! Today’s rally using children was another grotesque display reminescent of Nazi Germany.