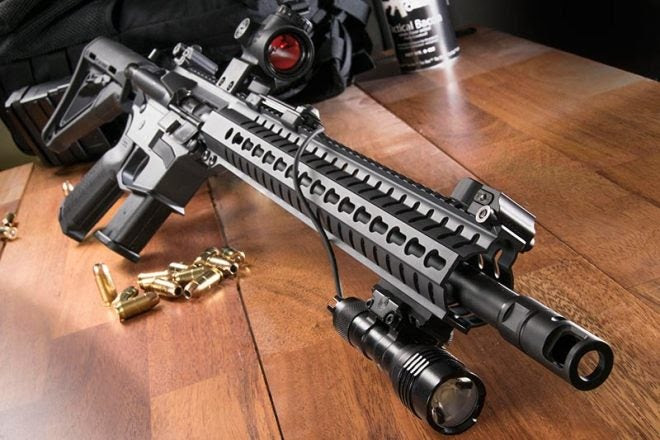 Pistol caliber AR carbines have become very popular in recent years. In the majority of circumstances, “pistol caliber AR” has been synonymous with “straight blowback 9mm carbine.” CMMG is now offering an alternative platform that changes this paradigm. It is called the MkG45 Guard.
The MkG45 Guard is a new line of AR-style firearms chambered in .45 ACP. These guns use a delayed blowback system that is said to be better suited for pistol cartridges than straight blowback.
Follow the The Firearm Blog Handguns Channel

Called Radial Delayed Blowback, the system causes the bolt to rotate during recoil.
This system reduces the velocity of the bolt so that powerful pistol cartridges can be used without the need of a heavy buffer system. In fact, CMMG states that these .45 guns use a buffer that is lighter than a standard 9mm buffer from a straight blowback system.
For the end user this results in two things: a lighter gun and less felt recoil. Some people are surprised by the amount of recoil that a pistol caliber carbine can produce – especially in something like a Kel-Tec Sub-2000. This system should tame the rearward force of the bolt.
One potential issue that I am concerned about is that the company offers a bolt weight kit for “…those who wish to fine-tune the Guard for +P ammunition…” I would hope that the gun would run reliably with standard pressure and +P ammo.

There is only 2,000 PSI difference between the maximum average pressure of standard .45 ACP (21,000 PSI) and .45 ACP +P (23,000 PSI.)
However, that is an increase of about 9.5%, which could be enough to throw off the delayed blowback system. Once these get into the hands of reviewers, I hope people take a close look at this and see how the gun runs with both pressures.
CMMG designed the MkG45 to feed from Glock 21 magazines. The guns ship with 13-round Glock factorymagazines, and the company recommends Glock manufactured magazines for best reliability.
CMMG will offer this gun in five versions including carbine, PDW and pistol models. The base “T” model will have a 16.1” threaded barrel with brake, M4-style stock, A2-style pistol grip and a KeyMod handguard. Unloaded, the gun weighs only 5.6 pounds. It has a MSRP of $1,299.95.