I briefly owned one of these rifle but it was in 7mm Mauser. But nonetheless it was one fine shooting rifle. But sadly economics intervened and I was forced to sell it. I just hope that who ever has it now is giving it a good home! 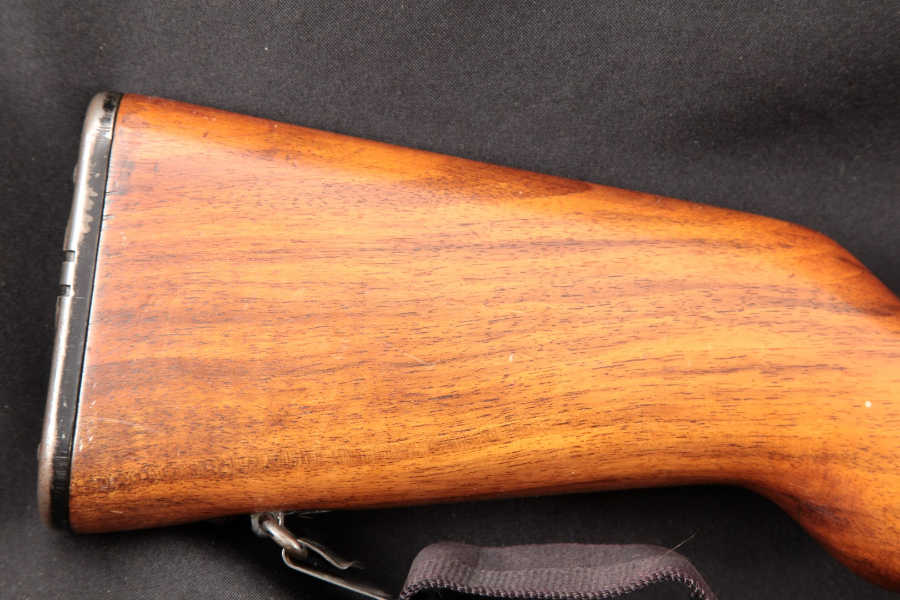 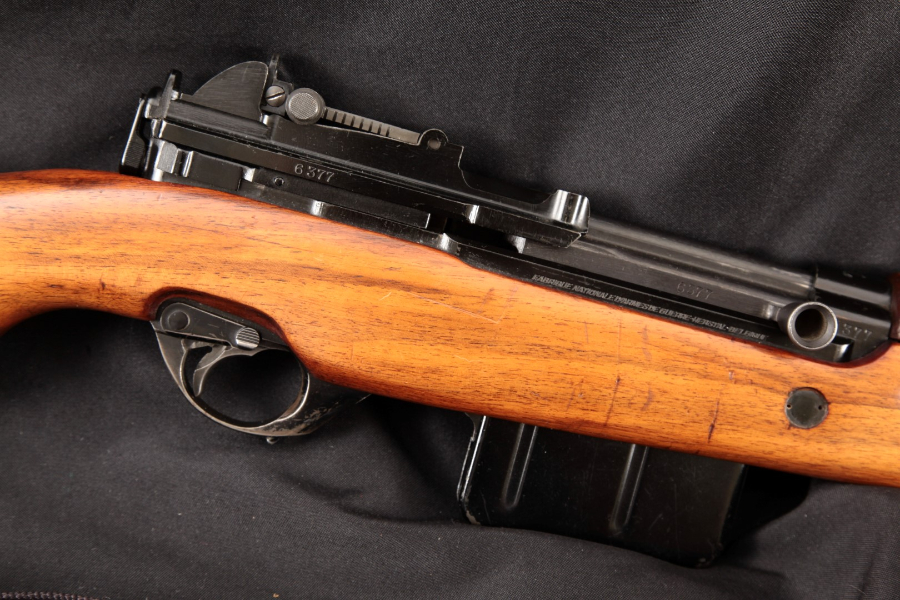 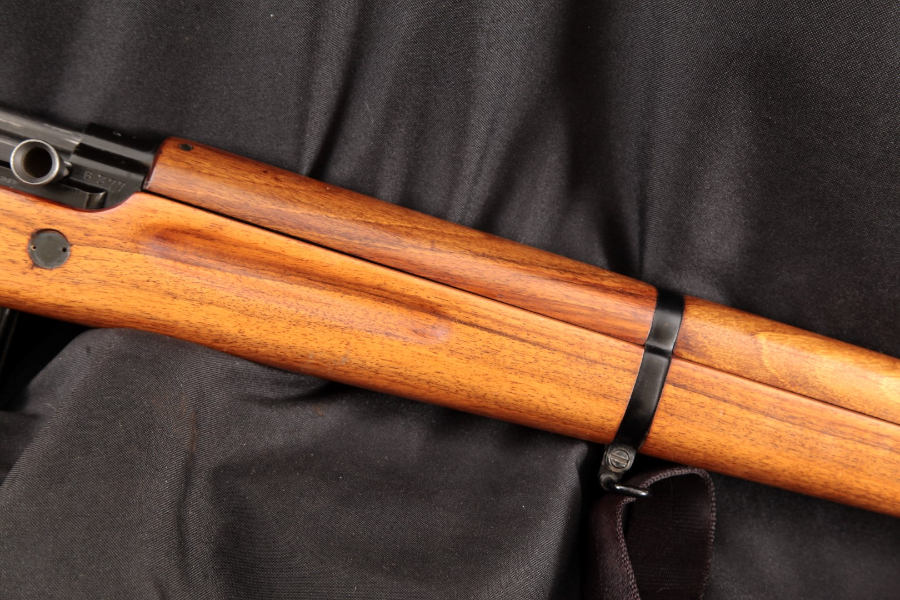 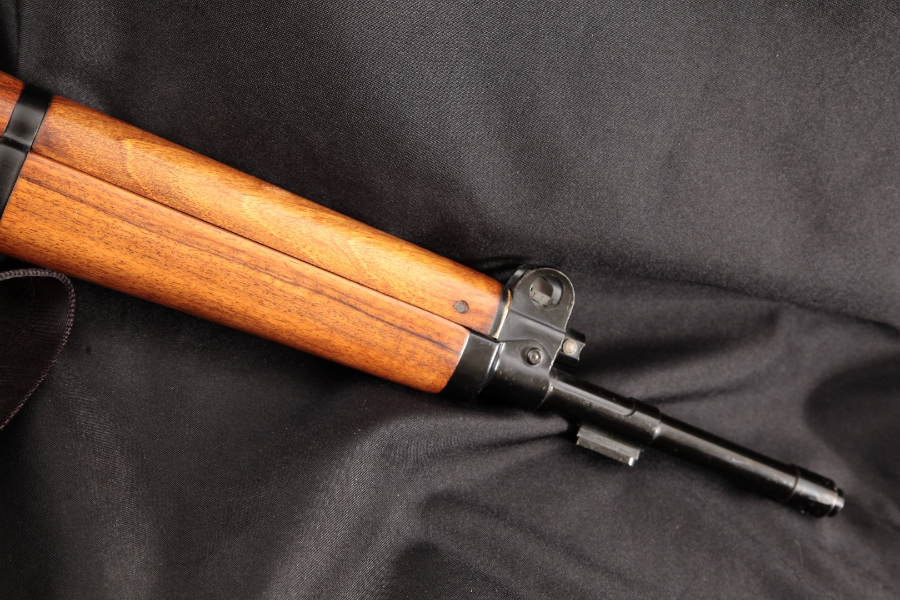 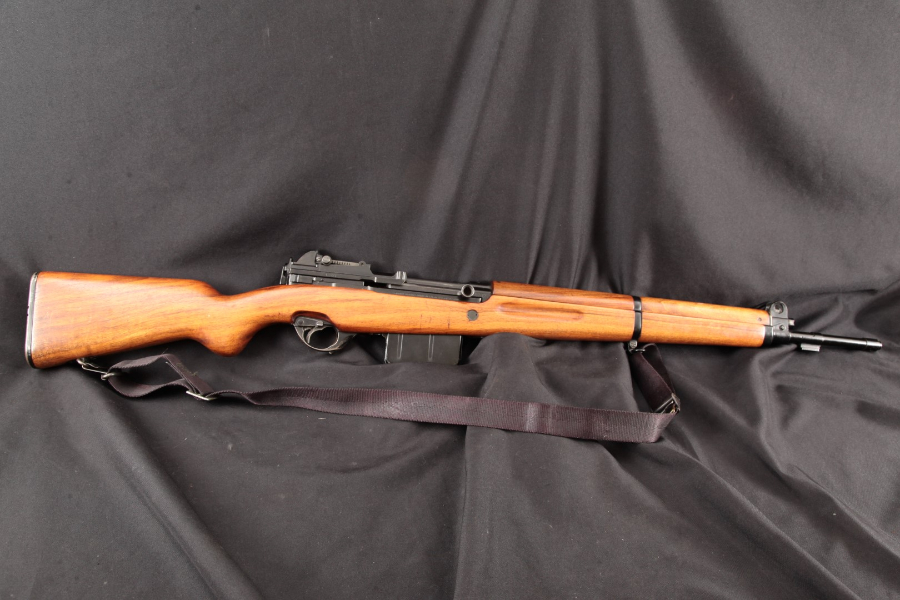 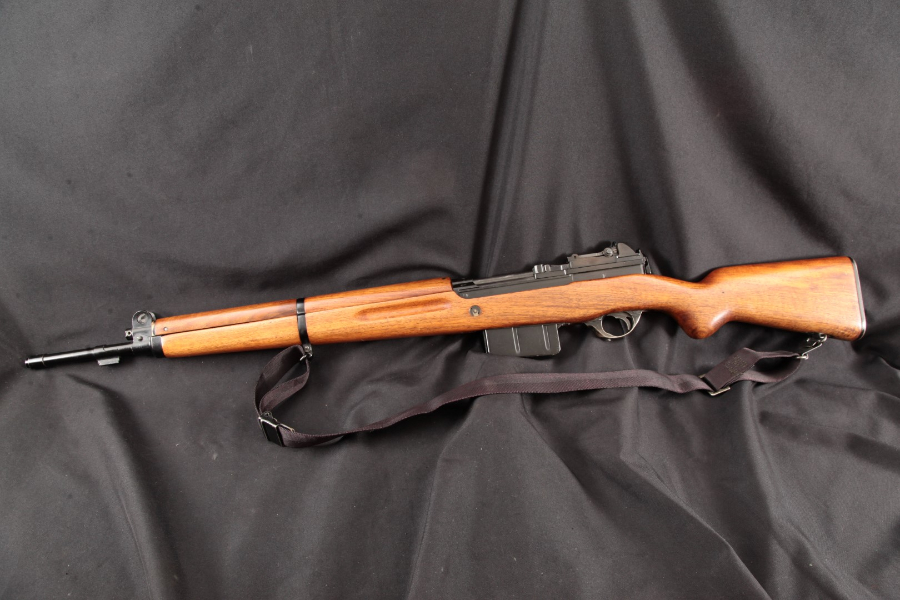 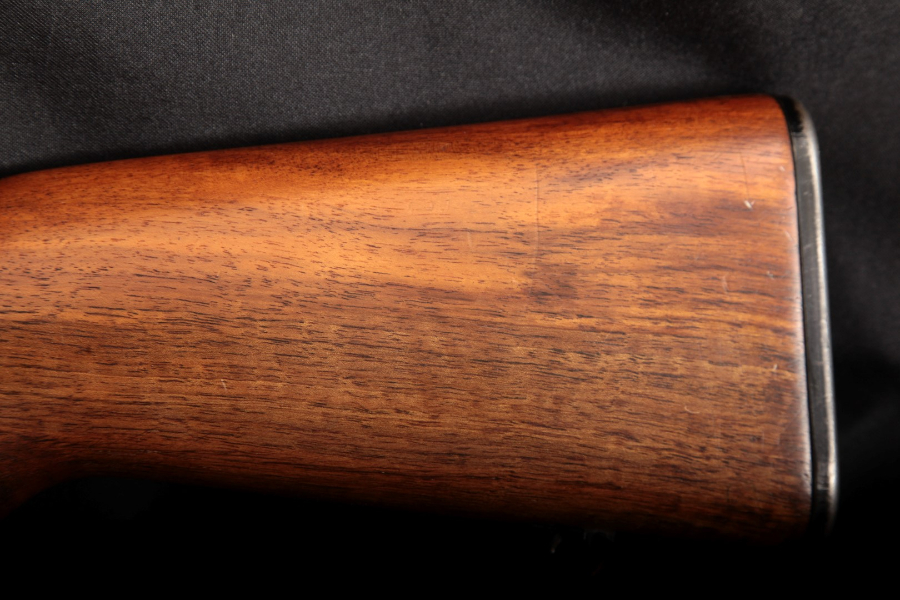 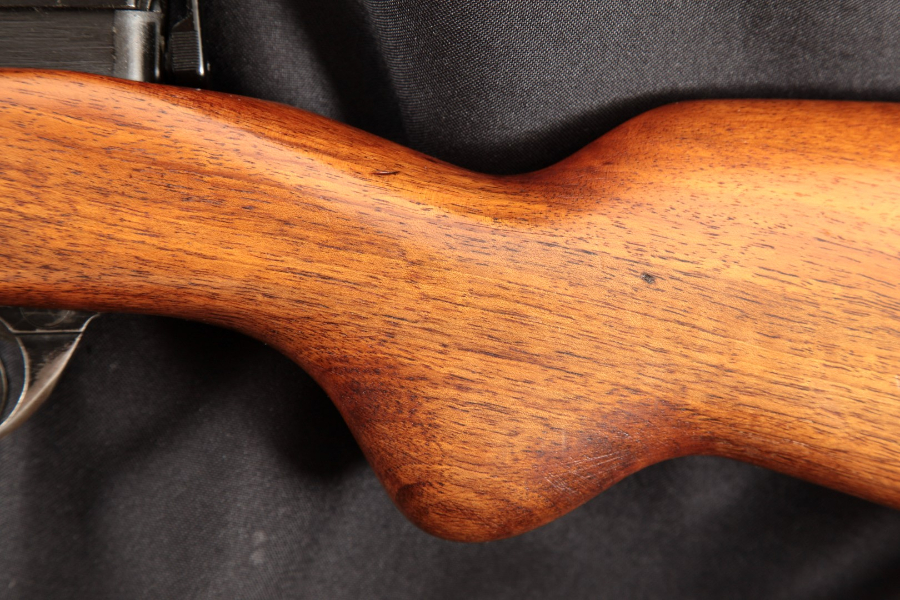 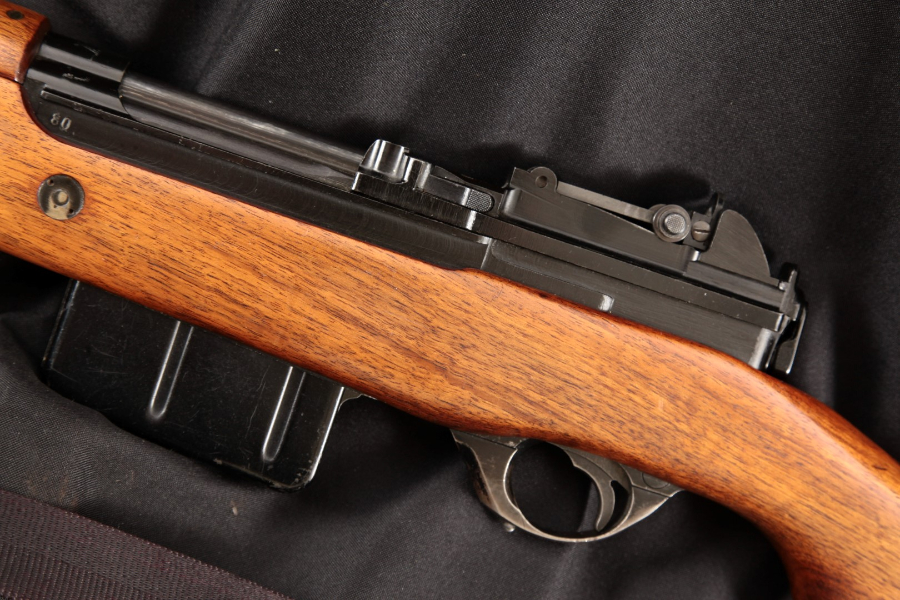 The Fabrique Nationale Model 1949(often referred to as the FN-49, SAFNor AFN) is a rifle available as both a semi-automatic rifle and as a selective fire automatic rifle designed by Dieudonné Saive and manufactured by Fabrique Nationale.
It was used by the militaries of Argentina, Belgium, the Belgian Congo, Brazil, Colombia, Egypt, Indonesia, Luxembourg, and Venezuela. The automatic rifle version with selective fire produced for Belgium was known as the AFN.
While well regarded for its high build quality and reliability in comparison to the rifles of the time, its marketability was limited, as it was not developed in time for use in World War II but later, as many militaries had already begun the switch to selective fire battle rifles.
An unknown number of FN-49’s were produced as selective fire automatic rifles, but the small 10 round box magazine limited the usefulness of the fully automatic feature.
The FN-49 found itself in direct competition with a number of more modern rifles such as the Heckler & Koch G3 and Fabrique Nationale de Herstal‘s own FN FAL, resulting in limited sales.

Dieudonne Saive, Fabrique Nationale‘s then chief firearm designer, experimented with a number of recoil-operated rifle designs in the early 1930s.
While little came of these experiments, they would become the basis for a gas-operated semi-automatic rifle, which he patented in 1936 and prototyped in 1937. (Photographs of these prototypes still exist, and they show a number of characteristics that would later appear in the FN-49.)
FN’s new rifle was still in development in late 1938 – early 1939, and a version with a 5-round magazine was about to be marketed. But when German armies invaded Poland, these plans were delayed to increase production of bolt-action rifles and machine guns.
The German invasion of Belgium in May 1940 interrupted any plans for the production of the new model, as Liège, home of FN’s factory, was occupied by the German military. Despite this setback, Saive was able to escape to England via Portugal in 1941, where he continued work on what would become the FN-49.
By 1943, Saive was back to working on his experimental rifle, now in 7.92×57mm Mauser. Late that year, the Royal Small Arms Factory, Enfield ordered 50 prototypes (designated “EXP-1” and sometimes referred to as “SLEM-1” or “Self-Loading Experimental Model”).
Based on tests with these prototypes, Enfield placed an order for 2,000 rifles for troop trials, but a last-minute problem with the moderation of the gas pressure (as well as the impending end of World War II) led to the cancellation of this order.
Despite this, Saive (who had returned to Liège shortly after its liberation in September 1944) continued work on the rifle, and finalized the design for the FN-49 in 1947.
The FN Model 1949 is ammunition specific since it does not have an adjustable gas port or valve to adjust the rifle to various propellant and projectile specific pressure behavior, except for some models, in which the gas port can be adjusted with a special wrench.
This also requires removing the upper forward handguard for the adjustment.

The contracts for the SAFN 1949 rifle started in 1948 with the first order placed by Venezuela on March 31, 1948, delivered by exactly four months later. The last production contract of complete rifles was ordered by Indonesia on December 19, 1960 and delivered by February 19, 1961.[1]
Some sources claim pre-production models for demonstration and testing were produced in 1948, making rifle ready for contract orders and mass production. Other sources however claim The rifle was trialed with the Royal Netherlands Navy in 1947, The Netherlands Navy trials did not however lead to a sales contract.
FN started looking for customers, but the communist states were not an option (as they were required to buy or build Soviet designs). The Western European nations had vast stocks of World War II firearms.
They also could get American and British weapons aid, which was inexpensive or free. So FN decided to market to the non-aligned countries, who did not want to commit to Western or Soviet doctrine, which was inevitable when accepting aid.[2]
The first contract production of the SAFN 1949 rifle was delivered to Venezuela by May 31, 1949 composed of 2,000 rifles in caliber 7×57mm Mauser with an additional 2012 rifles including cut-away training demonstration rifles delivered by July 31, 1949.[1]
The remaining rifles of the Venezuelan contract of 8,012 rifles were sold as surplus in the United States, and are prized by US collectors, sportsmen, and hunters because of the unique features ordered by Venezuela, the general good to excellent condition of the surplus rifles and the superb accuracy of the 7×57mm Mauser cartridge.
The second contract was for the Egyptian government ordered on May 30, 1948 and delivered by June 10, 1949, 100 rifles chambered to fire the 8×57mm Mauser cartridge. While initially a small contract delivery Egypt would eventually purchase 37,602 SAFN 1949 rifles total.[1] 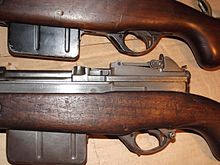 The third contract was ordered by the Belgian government starting with thirty test rifles on May 12, 1949, received on August 31, 1949, and made a second larger order for 100 test rifles delivered by December 12, 1949.
The Belgians would make a contract for production of the SAFN 1949 rifle on August 24, 1950 for 6000 rifles in caliber .30-06 Springfield. The Belgians designated the rifle as the ABL SAFN-49, ABL is an acronym for the Belgian Army in both French and Dutch; “AB” for the French “Armée Belge” and “BL” for the Dutch “Belgisch Leger”.
The contracts for the SAFN 1949 rifle made by FN for Belgium totaled 87,777 rifles total, composing almost half of all FN-49 rifles ever produced.[1] A fully automatic, selective fire version, known as the AFN was produced for the Belgian military.
It is sometimes stated that all the ABL weapons were either built as a selective fire automatic rifle or that all could be readily convertible to selective fire automatic rifle. The AFN was also used by the Marines of the Belgian Navy or ZM-FN. (Zeemacht – Force Navale).
Luxembourg was the fourth country to order the SAFN 1949 rifles with the first order placed on October 4, 1950 and taking possession of the first 1500 rifles by May 5, 1951.
The Grand Duchy of Luxembourg would eventually purchase a total of 6,306 rifles including rifles specifically for Luxembourg’s Gendarmerie, which were FN-49s that comprised standard models, training cut-away rifles, and sniper variants, all in caliber .30-06 Springfield.[1]
The Luxembourg models except for the Gendarmerie contract were sold as surplus in the United States, some were distributed to purchasers in larger US chain retail outlets.
The Luxembourg models are sought after for two reasons: first, because of the particularly good condition of the Luxembourg surplus rifles; and second, because of the fact that these FN-49 rifles were chambered for the .30-06 Springfield, a cartridge popular in the US sport shooting and hunting communities.
Very few .30-06 FN-49 rifles from other contracts have been imported into the United States, making the Luxembourg rifles the only affordable option for an FN-49 in that caliber.
Indonesia, the Belgian Congo, and Colombia would make up the fifth to seventh contracts all produced in caliber .30-06.[1]
Argentina requested the eighth contract ordering 5,536 SAFN 1949 rifles in caliber 7.65×53mm Argentine on July 29, 1953 for use by the Argentine Navy after an initial order of one test rifle in 1948.[1]
Several prototypes were made in other calibers, including at least five in 6.5×55mm for testing in Sweden, one in caliber 7.5×54mm French for testing in Syria, one in caliber .30-06 for testing in the United States, and one in caliber 7.62×51mm NATO for Brazil.[1]
A very small yet unknown quantity of commercial rifles chambered in .30-06 were imported to the USA and Australia by Browning some time during the 1960’s. These rifles are incredibly rare and few examples have been documented. They are configured with a polished checkered stock with a rollover cheek piece and side mount.

Contrary to some speculation FN did not contract or produce the Argentine conversion of SAFN 1949 rifles from 7.65×53mm Argentine to 7.62mm NATO.
While FN did receive and then later deliver an order for a conversion of a single rifle in March 1967 the remaining armory stock of the Argentine rifles were converted domestically by Metalúrgica Centro a company formerly known as Fábrica de armas Halcón.
Metalúrgica Centro provided and installed in each rifle a new barrel in 7.62mm NATO, modified each ejector, and modified each trigger guard to take a new 20 round detachable box magazine.
The converted rifles were provided with proprietary 20 round detachable box magazines manufactured by Metalúrgica Centro to fit the SAFN 1949 rifle conversions.
The 20 round steel magazines are proprietary but were made to share the magazine loading charger with the FN FAL rifle used by the Argentine Army.[1] These chargers are the same as for the Mauser Kar-98k, and thus not interchangeable with standard NATO stripper clips.
A very small number were later used in the Falklands War as sniper rifles by the Argentinians.[citation needed]