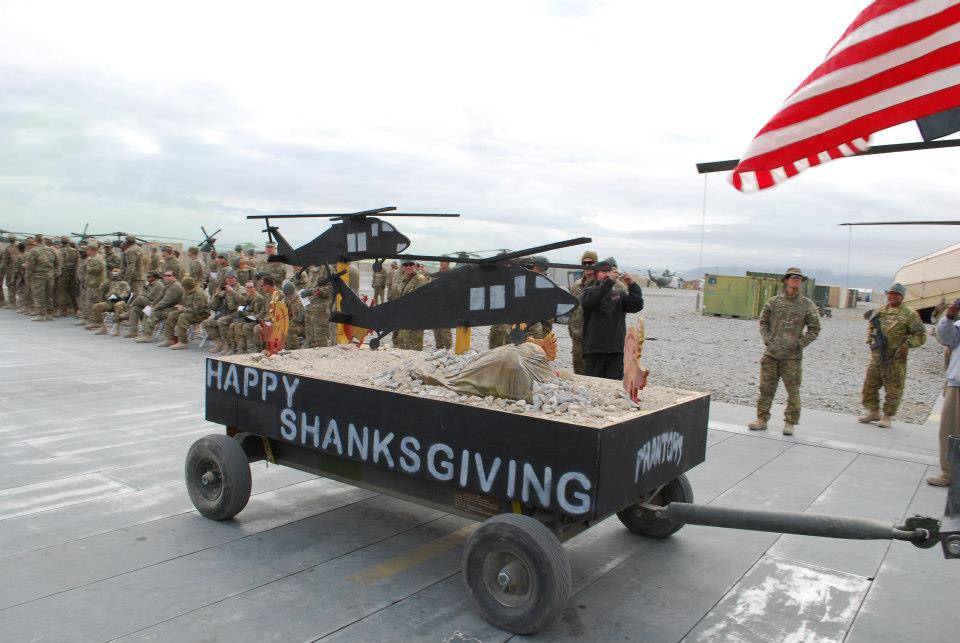 Spending the holidays on deployment is a tough part of military life. On top of being separated from friends and family, the soldiers of the 101st Combat Aviation Brigade, 101st Airborne Division (Air Assault) were deployed to the infamous FOB Shank during Thanksgiving 2012. The Forward Operating Base, located in eastern Afghanistan, was one of the most heavily rocketed in the country during the war. To bring some holiday cheer to their deployment, 5-101 held a Thanksgiving Day Parade at the FOB: a “Shanksgiving” Day Parade. Special thanks to the The War Murals project for pulling this all together on Reddit!

Here are some pictures from the iconic 2012 Thanksgiving Parade at FOB Shank Afghanistan:

This float sums up Thanksgiving at FOB Shank quite nicely. The CAB flies the UH-60 Black Hawk, depicted here in Team America livery, as well as the CH-47 Chinook and AH-64 Apache helicopters. Also depicted are Thanksgiving-themed Taliban turkeys launching footballs from a mortar tube. Indirect fire, or IDF, was extremely common at FOB Shank. Whoever came up with this float found some serious creativity at the bottom of a Rip It can.

B Co., 1st Battalion, 101st Aviation Regiment brought the King to FOB Shank with their float named “Elvis Lives.” If the sign on the side and the figure in front weren’t enough, one soldier dressed up as Elvis himself with a white rhinestone jumpsuit and guitar. For good measure, the Bearcats strapped two AGM-114 Hellfire missiles to their float.

There’s a lot to unpack with this float. First, you have Santa on a .50-cal reminding everyone that Christmas is right around the corner. Behind him are what appear to be a Pilgrim and Native American, representing the Thanksgiving theme. The helicopter float overall appears to be a hybrid of a CH-47 in front and UH-60 in back. However, the keen-eyed viewer will note that the iconic 101st Airborne Screaming Eagle depicted on its nose actually reads “Screaming Gobblers,” maintaining the Thanksgiving theme.

Snoopy and The Peanuts Gang

The summer of 2012 saw the release of the first Avengers movie. With their first big on-screen collaboration, characters like Captain America, Iron Man, The Hulk and Black Widow saw an explosion in popularity. Naturally, the 101st CAB included the Avengers in their Thanksgiving Day Parade, topped with Santa hats to keep the festive theming.

B Co., 96th Aviation Support Battalion’s float was a simple yet impressive representation of the famous Mayflower, the ship that brought the Pilgrims to the New World in 1620. The float is even marked with the company’s nickname, “Big Ugly.”

With this Santa-themed float, the Screaming Eagles depicted Saint Nick in a sandbag-fortified four-wheeler. With all the IDF that FOB Shank received, even Santa Claus could use the extra cover. Still he didn’t forget to bring presents for the troops deployed there. This float was actually named the champion of the parade.

In addition to the parade, FOB Shank transformed its stores into a Black Friday shopping center. Favorite retailers from back home like Target, Walmart and Best Buy were depicted as overlays on the existing storefronts. While there weren’t any doorbuster sales on TVs or gaming consoles, the added taste of home was a nice touch to round out Thanksgiving 2012.