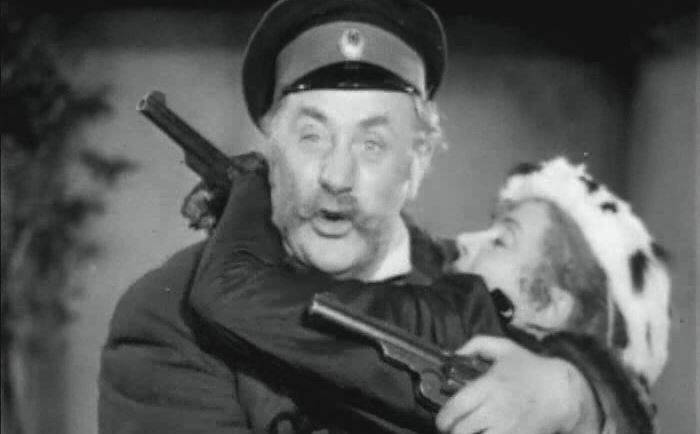 A still from the 1938 comedy “The Bear” with the participation of wonderful actors Mikhail Zharov, Olga Androvskaya and two revolvers “Smith and Wesson”!
“My father drank like a barrel,
And he died from wine.
I am the only daughter left
And I am called “Mamzel Na-na”.
(A song from the Soviet film “Bear” (1938) directed by Isidor Annensky based on the play of the same name by A.P. Chekhov)

Weapon and firms. And it so happened that after the Crimean War, the Russian imperial army, or rather not the army itself, but the ranks who commanded it, finally realized that the need to arm with modern weapons is not a whim, but a severe necessity. Well, there is not enough for our entire army made on the model of the Kolt revolvers, of which only 400 were made in our country in 1855. True, the initiative was taken by the gendarmes, armed with a Lefosche revolver in 1860, and all the same sailors who requested Galan’s revolvers for themselves in 1869 … But the army still did not have a revolver. But time and money prevail over everything. And now (albeit a little delayed) and the army finally received a weapon of the first class for that time – a cartridge revolver of the firm “Smith and Wesson” caliber .44 under the so-called “Russian cartridge”.

Revolver “Smith and Wesson” model 1870. Photo from the site of the firm “Smith & Wesson”

There was already an article here on VO, where it was told about the role that a certain Grand Duke and two of our colonels who were well versed in weapons played in the fact that this particular revolver came into service – we will not repeat ourselves. It is important to emphasize that one of the most important requirements that the army presented to the new weapon was its lethality! The revolver was supposed to kill the horse at a distance of 50 steps and thus incapacitate the rider! The firing speed of their revolver was also important, because they were supposed to arm the cavalry first of all, and there speed is of particular importance.

The revolver was tested and here are the results it showed:

when shooting at boards (pine) with a thickness of 25 mm at a distance of 25 steps with a distance of one inch, 3,65 boards were pierced, that is, three through and through, and in the fourth the bullet got stuck;

but for 100 steps only one, however, and this seemed quite enough!

At a distance of 15 paces, the radius of the best half of the bullets was 8,9 cm;

Well, his rate of fire was such that from a soldier’s model (that is, without self-cocking), the shooter could release all six charges in just ten seconds (!), And then, reloading the revolver, 24 shots in two minutes. 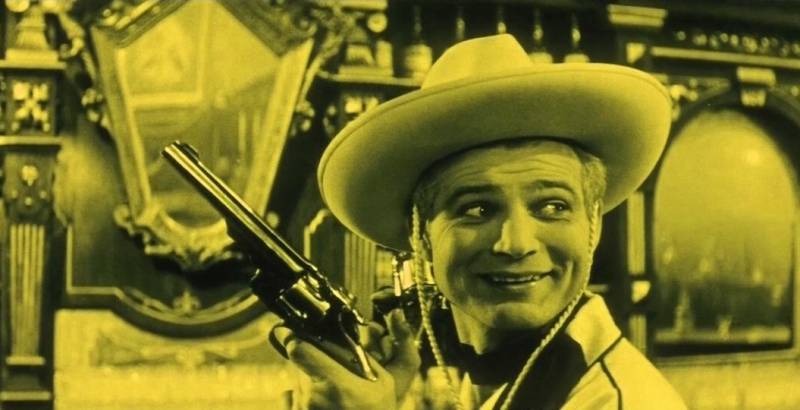 Lemonade Joe is a wonderful 1964 parody of Western Westerns, filmed in Czechoslovakia. By the way, Joe is holding a Smith and Wesson revolver of the “Russian model”

The adopted model of 1869 in Russia received the official name “4,2-line revolver of the Smith-Wesson system” and had the following main features: a 4,2 line caliber (10,67 mm), a six-round drum, an eight-inch barrel (203 mm) and a cartridge with a Berdan primer for center ignition. A very important quality of the revolver was its quick reloading.

The revolver was designed in such a way that it “broke” in half, and at the same time all spent cartridges were simultaneously (and automatically) removed from the drum. True, the revolver originally had a trigger mechanism of only single action, but this was again the requirement of our military. After all, a loaded revolver weighed about 1,5 kg, which, in their opinion, made self-cocking firing from it inaccurate.

The first model that came to Russia was designated by the index I. And in total, the Smith & Wesson company supplied us with more than 250 thousand of their revolvers. And for a long time (because of this) it was a little-known enterprise in the United States itself, since she worked tirelessly on the Russian order. 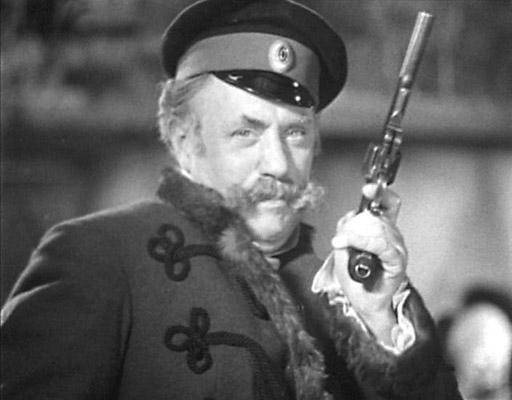 The hero of our film, although they are not comparable in content, is certainly “more epic”!

By the way, the model III of 1880, although it had the shortest barrel in comparison with all the others, nevertheless had quite sufficient destructive power: its bullet at a distance of 20 m pierced four inch pine boards.

The external difference (and the most noticeable one that distinguished the “Russian model” from all the others) was a protrusion on the body behind the trigger, which prevented the handle from “sliding” when firing into the palm, and a “spur” on the trigger guard (which increased the convenience of using the revolver when shooting from a horse ), introduced (as they say!) with the filing of the Grand Duke Alexei Alexandrovich, who was hunting buffalo with a Smith and Wesson revolver! 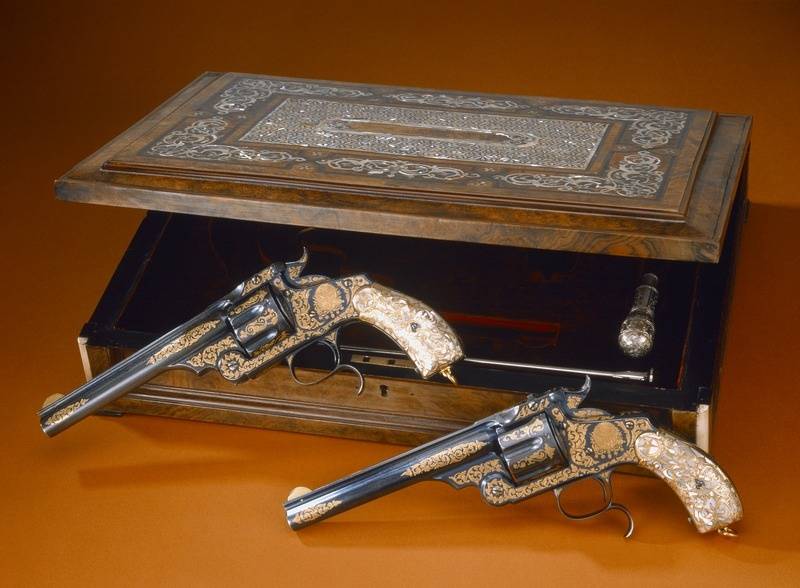 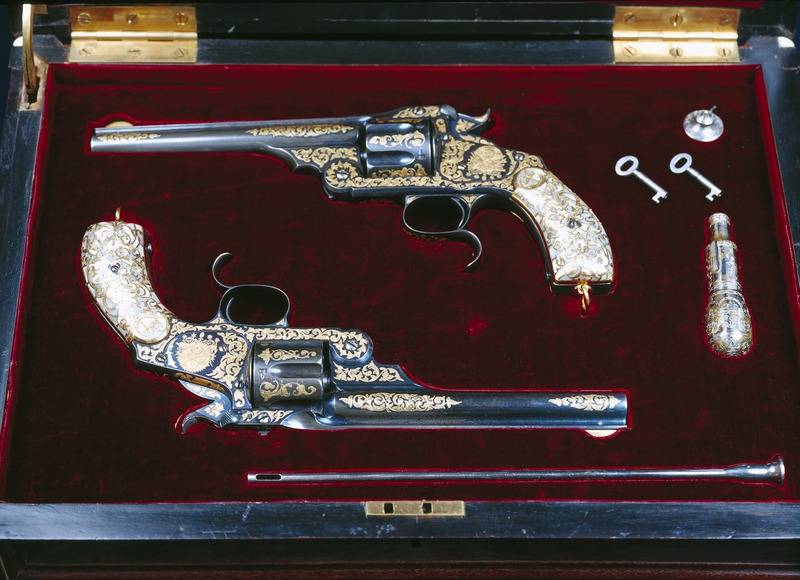 And this is how they look in the box!

In addition, for the officers in the mid-1880s in the United States ordered a small batch of self-cocking “Smith and Wesson” No. 3 model 1880, which had a double action trigger. He received the name “Smith-Wesson revolver, officer’s standard, triple action.” Why “triple action”? Yes, because the trigger on it could also be put in the “third position” – that is, on the safety platoon. Therefore, these revolvers had a developed trigger, which made it possible to create strong pressure on it with a finger, and the bracket around it was large.

The cartridge had a brass sleeve, which contained a charge of black powder in 1/3 of the spool (1 spool – 4,265 grams), and a bullet that had a length of 1,5 calibers and a weight of 3,5 spool. The bullet was provided with three annular grooves stuffed with “cannon fat”, which made it possible to lubricate the barrel and protect it from the harmful effects of powder gases. Well, his bullet speed was quite decent – about 210 m / s.

By the way, it soon became clear that the destructive power of the revolver bullet is even higher than the bullets of the Berdan rifle, which had the same caliber, precisely because of its lower initial velocity! That is, the Russian imperial army received at its disposal extremely powerful and modern weapons at that time. And yet she was unhappy with him. 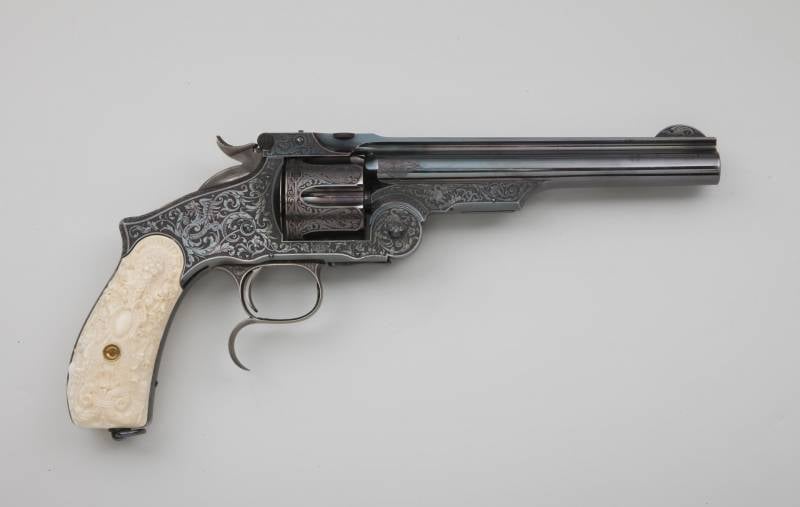 I am dissatisfied, however, not at all with its ballistic characteristics and convenient reloading (although there were also complaints about it). No, the revolver was disliked for being too heavy.

It soon became clear that soldiers and officers did not have to use it in battle so often. But carrying one and a half kilograms of iron on your side is inconvenient. The belt with the holster slid to one side, and for some reason they did not think of two shoulder belts that appeared in the Russian army in the XNUMXth century.

The cord (so as not to lose the revolver!), Fixed to its handle, was inconvenient, since it looped around the neck and created a direct threat of suffocation of the shooter. So many scolded “Smith and Wesson”, but there were those who praised him.

“And so the system of carrying a revolver in a holster on a waist belt should have been kept unchanged, the revolving cord should be abolished; the Smith and Wesson revolvers should be left as before, because, in addition to excellent fighting qualities, in fact, as a firearm, this revolver in hand-to-hand combat is an equally excellent edged weapon in its massiveness and in the crushing blows it inflicts.

And yes, indeed, this revolver, taken by the barrel, was a real club, although its creators hardly planned it for such use.

Therefore, it so happened that in 1895 “Smith and Wesson” replaced the Nagant revolver, which was much lighter and smaller in size, although it was reloaded in the most primitive way, through the “Abadi door” that closed the drum chambers by turning sideways , and on the right side, by analogy with Colt’s revolvers in the early 1870s, which made him completely uncomfortable for the same cavalry.

The Small Russian Model Smith-Wesson was also produced – as a civilian weapon of caliber 38 (9,7 mm), with a short barrel and even without a trigger bow.

In addition to the USA and the Tula Arms Plant, these revolvers chambered for the “Russian cartridge” .44 were also produced by some European firms. For example, a self-cocking lightweight sample with a short barrel was made in Belgium. And among the officers of the Russian army, it was very popular precisely because of its reduced weight.

In general, the Smith and Wesson revolvers served a long service in Russia. When they were taken out of service by the army, they were handed over to the Russian police. During the First World War, the “Smith-Wessons” remaining in the army warehouses were given to the militia, rear and auxiliary services of the army, and some part were converted into rocket launchers. Until 1917, foresters and road rangers served with them, since they were not given guns, so that there would be no temptation to engage in poaching.

In 1879 Russia transferred 2000 revolvers of the 1874 model and 100 cartridges to the Bulgarian army. In November 000, on the eve of the war with Serbia, it was armed with 1885 revolvers, and before its entry into the First World War – 1612. Then one thousand revolvers mod. In 1112, Japan purchased from the USA and used them during the Russo-Japanese War. And then on the basis of this revolver in the Land of the Rising Sun they created their own model – the Hino revolver. 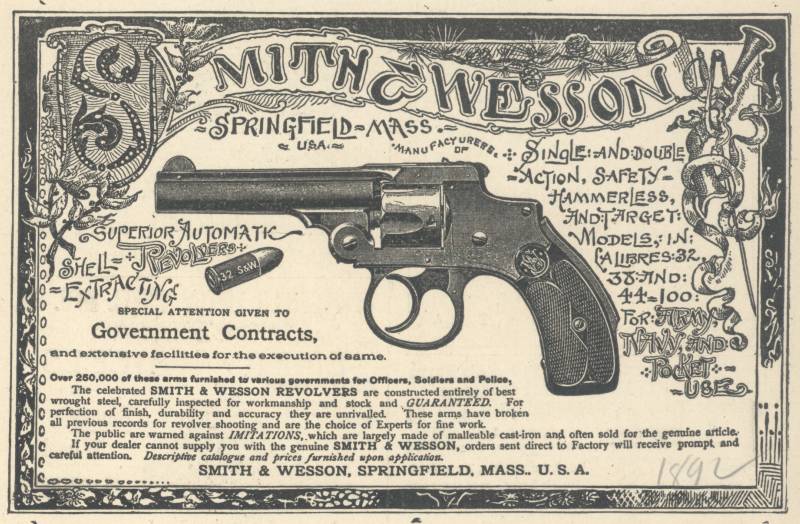 They sold Smith-Wessons to Turkey, Mexico and even Australia, as well as to China. However, in no other country in the world have they been found in such numbers as here, in Russia! 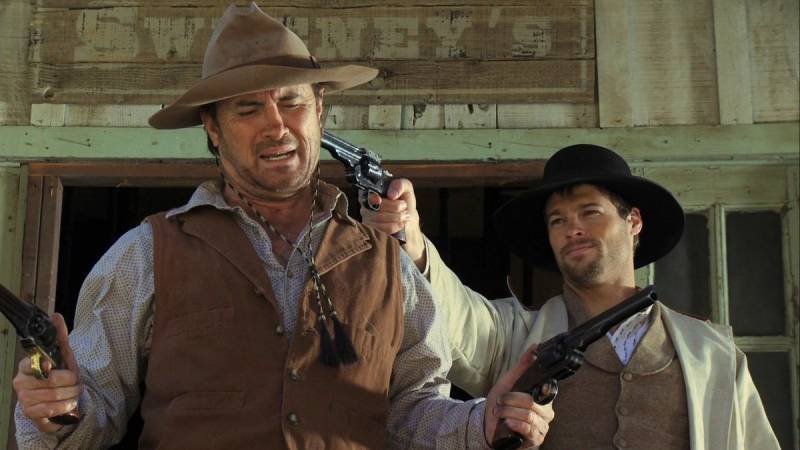 Still from The Last Days of Frank and Jesse James. Everyone has a Smith & Wesson in their hands!

By the way, despite its rarity in the USA, “S&W Russian” and similar models were very popular in the Wild West. So, in different years such famous personalities were armed with them – shooters and law enforcement officers like Wyatt Earp, his brother Virgil, Pat Garrett and others, and on the other hand, equally well-known criminals like Billy Kid and John Hardin, Jesse James and Bob Ford. So, it was from this .44 caliber revolver that Ford shot in the back and killed Jesse James … 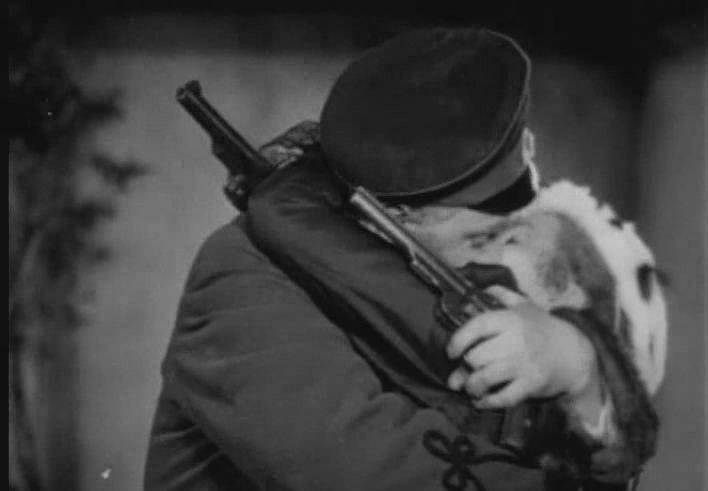 Well, for our “Bear” everything ended well, just very well!