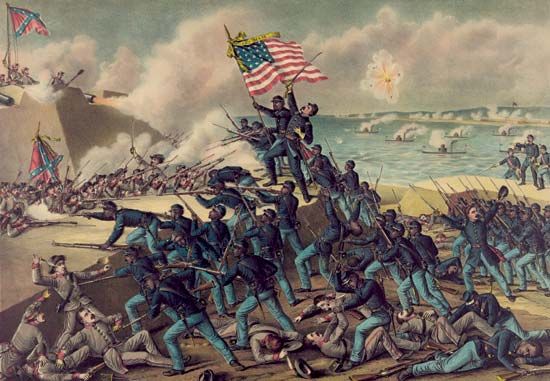 The Second Battle of Fort Wagner, a week later, is better known. This was the U.S. attack on July 18, 1863, led by the 54th Massachusetts Volunteer Infantry, one of the first major American military units made up of black soldiers.
Colonel Robert Gould Shaw led the 54th Massachusetts on foot while they charged, and was killed in the assault.[1]
Although a tactical defeat, the publicity of the battle of Fort Wagner led to further action for black U.S. troops in the Civil War, and it spurred additional recruitment that gave the U.S. Army a further numerical advantage in troops over the South.[1]

U.S. forces besieged the fort after the unsuccessful assault. By August 25, U.S. entrenchments were close enough to attempt an assault on the Advanced Rifle Pits, 240 yards in front of the Battery, but this attempt was defeated.
A second attempt, by the 24th Mass. Inf., on August 26 was successful. After enduring almost 60 days of heavy U.S. shelling, the Confederates abandoned it on the night of September 6–7, 1863. withdrawing all operable cannons and the garrison.[1][3]
The main reason the fort was abandoned was a concern about the loss of the garrison due to artillery fire and the threat of imminent assault.
On September 6, the garrison commander, Colonel Keitt, wrote to his superiors that “The garrison must be taken away immediately after dark, or it will be destroyed or captured. It is idle to deny that the heavy Parrott shells have breached the walls and are knocking away the bomb-proofs. Pray have boats immediately after dark at Cummings Point to take away the men. I say deliberately that this must be done or the garrison will be sacrificed. I am sending the wounded and sick now to Cummings Point, and will continue to do so, if possible, until all are gone. I have a number of them now there. I have not in the garrison 400 effective men, including artillery. The engineers agree in opinion with me, or, rather, shape my opinion. I shall say no more.” A council of war in Charleston on the 4th had already reached the same conclusion, and the evacuation was carried out as planned.[4]
After the war a revisionist story arose concerning access to fresh water. The claim was made that bodies of the U.S. troops (54th Massachusetts and many white troops) were buried close to the fort and the decomposition of the bodies poisoned the fresh water well within the fort.
Continuing bombardment and interception of food/water supplies by boat from Charleston made holding the fort difficult.[3] This version of the story is directly contradicted by official Confederate correspondence at the time of the evacuation.
Within twenty years of the Civil War, the remnants of the fort had been washed away by erosion on Morris Island. A group of three ex-servicemen traveled to the fort in May 1885 and reported that the entire fort and approaches to it had washed away into the ocean.[5]
The fall of Battery Wagner would have considerable strategic significance. With its loss and that of Fort Gregg, Morris Island too fell to the United States.
Although Charleston remained in the hands of the rebels its port was effectively closed. At the end of the year Secretary of the Navy Gideon Welles could report that “the commerce of Charleston has ceased.”[6]The impact also showed directly in rebel customs receipts, which fell drastically from 1863 to 1864.[7] The labors and sacrifices of the United States forces during the storms and siege had in the end shutdown a vital lifeline to the rebellion.

The most famous regiment that fought for the U.S. side in the battle of Fort Wagner was the 54th regiment, which was one of the first African-American regiments in the war.
The 54th was controversial in the North, where many people supported the abolition of slavery, but still treated African-Americans as lesser or inferior to whites.
Though some claimed blacks could not fight as well as whites, the actions of the 54th Massachusetts demonstrated once again the fallacy in that argument, as this was not the first time blacks ever fought in war or even for the United States.
William Carney, an African-American and a sergeant with the 54th, is considered the first black recipient of the Medal of Honor for his actions at Fort Wagner in recovering and returning the unit’s American flag to U.S. lines.[1]
After the battle, the Confederates buried the regiment’s commanding officer, Robert Gould Shaw, in a mass grave with the African-American soldiers of his regiment, viewing this as an insult to him. Instead, his family were grateful to them for burying Shaw with his men.
Morris Island is smaller than 1,000 acres and is subject to extensive erosion by storm and sea. Much of the previous site of Fort Wagner has been eroded away, including the place where the Union soldiers had been buried.
However, by the time this had happened, the soldiers’ remains were no longer there because soon after the end of the Civil War, the Army disinterred and reburied all the remains—including, presumably, those of Col. Shaw—at the Beaufort National Cemetery in Beaufort, South Carolina, where their gravestones were marked as “unknown.”[8]