Smith & Wesson has fired back in a letter against the House Oversight and Reform Committee Democrats’ subpoena against the firearms manufacturer, Breitbart News can exclusively reveal.

On August 15, Smith & Wesson, represented by Schaerr Jaffe, sent a letter to House Oversight and Reform Committee Chair Carolyn Maloney (D-NY) regarding the committee’s subpoena, which was issued on August 1.

Smith & Wesson CEO Mark Smith said this subpoena amounts to nothing more than politicians and the media attempting to “disparage” Smith & Wesson. He elaborated in a statement on Monday:

A number of politicians and their lobbying partners in the media have recently sought to disparage Smith & Wesson. Some have had the audacity to suggest that after they have vilified, undermined and defunded law enforcement for years, supported prosecutors who refuse to hold criminals accountable for their actions, overseen the decay of our country’s mental health infrastructure, and generally promoted a culture of  lawlessness, Smith & Wesson and other firearm manufacturers are somehow responsible for the crime wave that has predictably resulted from these destructive policies.

But they are the ones to blame for the surge in violence and lawlessness, and they seek to avoid any responsibility for the crisis of violence they have created by attempting to shift the blame to Smith & Wesson, other firearm manufacturers and law-abiding gun owners.

It is no surprise that the cities suffering most from violent crime are the very same cities that have promoted irresponsible, soft-on-crime policies that often treat criminals as victims and victims as criminals. Many of these same cities also maintain the strictest gun laws in the nation.

But rather than confront the failure of their policies, certain politicians have sought more laws restricting the 2nd Amendment rights of law-abiding citizens, while simultaneously continuing to undermine our institutions of law and order. And to suppress the truth, some now seek to prohibit firearm manufacturers and supporters of the 2nd Amendment from advertising products in a manner designed to remind law-abiding citizens that they have a Constitutional right to bear arms in defense of themselves and their families.

The left mistakenly often refers to these rifles as “assault weapons.”

As documented previously by Breitbart News, Smith & Wesson already divulged to the committee that MSRs comprise a majority of its sales, and that less than ten percent of its advertising focuses on MSRs. 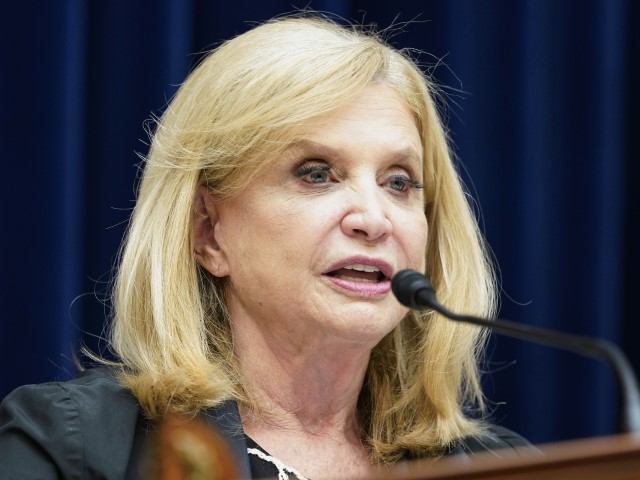 Chairwoman Rep. Carolyn Maloney, D-N.Y., asks a question during a House Committee on Oversight and Reform hearing to examine the practices and profits of gun manufacturers, Wednesday, July 27, 2022, on Capitol Hill in Washington. (Mariam Zuhaib/AP)

The firearms company also said it cannot track deaths or injuries, crimes attempted or carried out with semiautomatic rifles.

In a missive to Maloney, Paoletta explained the court precedent already details how Congress does not need very specific information about exact units sold or revenue.

The letter details many court cases to back up its legal argument, in what could be the foundation of a legal argument against the committee Democrats should they want to pursue a court case against Smith & Wesson:

Paoletta also notes that court precedent, which includes legal opinions from now-Supreme Court Justice Brett Kavanaugh, that there is no constitutional distinction between semi-automatic handguns and semi-automatic rifles:

“There is no basis in Heller for drawing a constitutional distinction between semi-automatic handguns and semiautomatic rifles.” Heller v. District of Columbia, 670 F.3d 1244, 1286 (D.C. Cir. 2011) (Kavanaugh, J., dissenting) (discussing District of Columbia v. Heller, 554 U.S. 570, 628–29 (2008)). See TRO at 10, Rocky Mountain Gun Owners v. Town of Superior, No. 22-cv-01685- RM-NRN (D. Colo. July 22, 2022), ECF No. 18, where a Federal Judge issued a temporary restraining order enjoining the town from, among other things, banning MSRs: “The Court is sympathetic to the Town’s stated reasoning. However, the Court is unaware of historical precedent that would permit a governmental entity to entirely ban a type of weapon that is commonly used by law-abiding citizens for lawful purposes, whether in an individual’s home or in public.”

Paoletta also wrote “Congress must clearly spell out with even more specificity why it needs the granular level of information,” citing an example as the Supreme Court’s decision in Americans for Prosperity Foundation. v. Bonta.

The lawyer representing Smith & Wesson noted the committee Democrats did not assuage any fears from Smith & Wesson that they would keep the company’s proprietary information confidential:

Unfortunately, those protocols did nothing to assure us that my client’s proprietary information would be kept confidential by the Committee. Quite the contrary, those protocols state merely that the Committee pledged only to confer with my client, to the extent practicable, regarding the possibility of disclosure, and that the Committee reserves the right to disclose such information, regardless of any objections my client might have. And, in fact, our concerns were justified evidenced by the Committee’s decision to release similar proprietary, business sensitive information from other firearm manufacturers, despite their objections.

Paoletta also noted Maloney allowed Sig Sauer, one of the largest firearms manufacturers, to settle for less information than what Smith & Wesson divulged to the committee. Sig Sauer “refused” to divulge any revenue totals and only told the committee that MSR sales amount to less than three percent of its total revenue.

In contrast, Smith & Wesson already told the committee that MSR sales comprise a majority of the company’s annual net sales.

Smith & Wesson has already tried to comply with the committee’s request for a hearing; however, the company did not want its CEO, Mark Smith, to be the only firearms executive present at a hearing discussing gun violence and potential gun control proposals.

Paoletta contended the subpoena is only meant to punish or embarrass Smith & Wesson::

In Mazars, the Supreme Court said, “Investigations conducted solely for the personal aggrandizement of the investigators or to ‘punish’ those investigated are indefensible.” Trump v. Mazars USA, LLP, 140 S. Ct. 2019, 2032 (2020) (quoting Watkins v. United States, 354 U.S. 178, 187 (1957)). Based on the Committee’s actions, my client further objects to providing this additional information because, to any reasonable observer, the Subpoena is meant to punish Smith & Wesson for declining an invitation to testify at the Committee’s recent hearing. Finally, my client objects to Request 4 because it is only meant to punish or embarrass Smith & Wesson. Indeed, the information requested is simply not relevant to legislation as there is nothing that any of my client’s senior executives or directors could have said following those horrific shootings that would be relevant to any legislative purpose, and even more so since the House has already passed a ban on MSRs. The Committee already knows which MSRs were used in those shootings. It already knows how they were obtained. And it already knows what can happen if MSRs—or any firearms for that matter—are misused by criminals. Nothing more— especially the thoughts that my client’s executives may or may not have expressed among each other about particular tragedies—is needed to legislate.

Maloney, who has portrayed herself a strong advocate of gun control reform, was not present in person to vote for gun control in late July. Instead, Maloney voted by proxy, instead choosing to fundraise in Manhattan.

Suraj Patel, a primary opponent against Maloney, slammed her for voting by proxy. He said she is “grandstanding” on the issue of gun control.

“I would have 100 percent been there for the vote if I was in Congress,” he said.

“We will continue to work alongside law enforcement, community leaders and lawmakers who are genuinely interested in creating safe neighborhoods,” Smith concluded in his statement. “We will engage those who genuinely seek productive discussions, not a means of scoring political points. We will continue informing law-abiding citizens that they have a Constitutionally-protected right to defend themselves and their families. We will never back down in our defense of the 2nd Amendment.”