The debate rages on: What is best for home defense, a pistol, a rifle or a shotgun? There are definite advantages and disadvantages to each of these when it comes to keeping your home safe. A pistol is easy to carry and easy to move around inside your home, but it lacks the fight-ending punch of a long gun. A rifle, such as an AR-15, is very familiar to most American gun owners, but .223 or similar calibers quite often require more than one hit to stop the threat. A defensive shotgun or tactical shotgun brings a heavyweight hammer to the fight, but it has a low ammunition capacity compared to a standard capacity AR-15 rifle, with more recoil.

Despite these apparent limitations, however, the power of the shotgun is a quite compelling argument for using it to defend your home. Pistol drills like the Bill Drill and Failure to Stop Drill exist because we understand that a pistol is often not able to stop the fight with just one shot. The same is true for the AR-15. It’s very common to see trainers teach that three, four or even five rounds on-target as a normal response to a lethal threat. This means that a 30 round magazine in an AR-15 (which is usually loaded to 28 rounds in the field) suddenly becomes a firearm that can engage 5-7 targets before it needs to be reloaded. Coincidentally, this is the magazine capacity of the typical tactical shogun. All of sudden, the ammunition gap between a defensive shotgun and a rifle or a pistol is considerably smaller, and using a shotgun as a home defense gun starts to make a lot of sense.

A good tactical shotgun training class can get even more out of your defensive shotgun, which is why I attended a recent Defensive Shotgun Instructor class taught by Tom Givens. Tom is a former Memphis police officer and a legend in the firearms training community. He is a firm believer in the power and efficacy of the defensive shotgun, and his class is a “must do” for anyone who wants to learn more about using a shotgun for home defense. 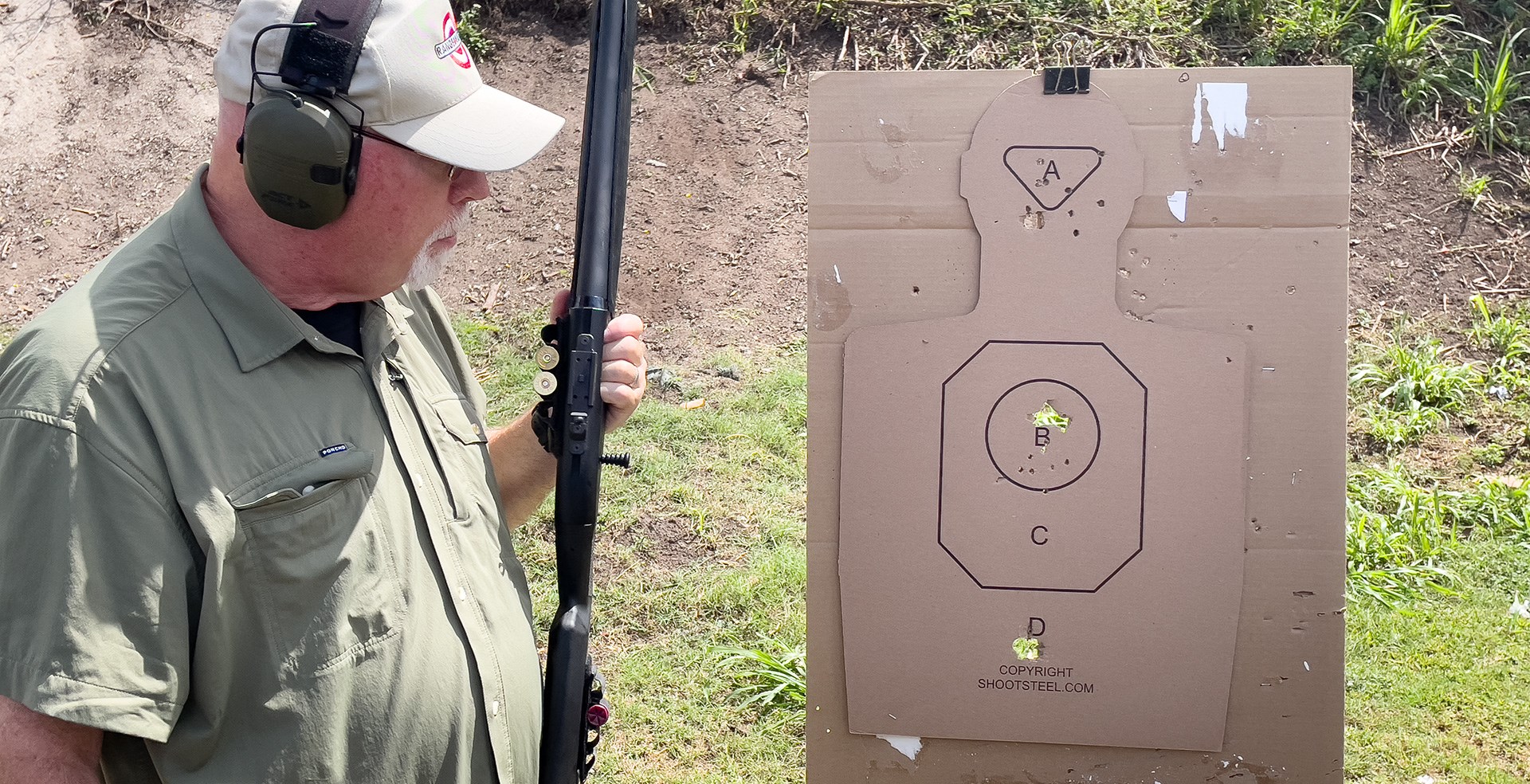 In this three day class, Givens taught us why a shotgun loaded with a good buckshot round is an absolute fight-stopper, if you understand what it can and can’t do. We first learned to pattern our specific gun with our defensive shotshell of choice to see how large the spread of pellets was at 5, 10, 15 or even 25 yards. Any pellet which doesn’t hit the intended target will fly downrange, with possibly disastrous results. Keeping all our hits on-target, no matter what gun you’re using, is an important part of marksmanship, and with a shotgun, that means knowing when the spread of your pellets exceeds the area of your target.

One of the biggest benefits of a good tactical shotgun training class is learning how to tame the recoil of a full-sized shotgun firing full-power buckshot loads. Givens teaches a “push-pull” method, where the hand that grips the fore-end of the shotgun pushes out towards the target while the other hand snugs the butt of the gun up against your shoulder. This creates a “loaded spring” effect and allows you to rapidly bring the sights of the gun back on target after each shot.

Make The Most Out Of Yourself And Your Gun

The smaller magazine capacity of the defensive shotgun can be overcome by making sure you’re feeding fresh rounds into the magazine whenever possible, and just like other guns, there are two types of reloads, emergency and tactical. An emergency reload is when your gun runs completely out of ammunition and needs to get refilled right away, while a tactical reload is adding more rounds to your gun that is partially empty. An emergency reload with a shotgun means dropping a single shell into the chamber and closing the action, thus loading the gun. Shooting that round, or loading the rest of the magazine via a tactical reload will be dependent on your situation.

There was much more to this class than just those three concepts, as this wasn’t so much a class about shooting the shotgun as it was a class about how to teach other people how to use their shotguns in defense of life and limb. A shotgun can be an extremely effective home defense firearm but is definitely not “fire and forget.” Rather, it needs skill and expertise to be used to its fullest (and most devastating) effect, both of which can be acquired with good tactical shotgun training.