Lieutenants never get much respect. What do you expect, though? You send a 22-year-old new college grad to officer candidates… 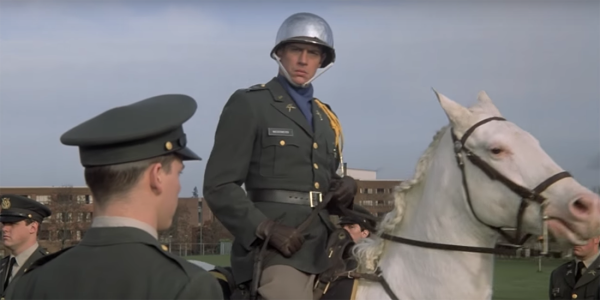 Lieutenants never get much respect. What do you expect, though? You send a 22-year-old new college grad to officer candidates school for a few weeks and expect him to be in charge of a platoon of grizzled combat veterans… What could possibly go wrong? It’s the brain-damaged leading the blind. Every rank has some major archetypes, and lieutenants are no different. Here are six types you’re probably already familiar with.

Quote: “If that’s not how we’re supposed to use a compass, then why did they teach it at The Basic School?”

The conventional view is that ALL lieutenants are clueless, but that can’t really be the case, or else the service would be even more screwed than it already is. All LTs take a while to get up to speed, but Lt. Clueless seems to be coming more undone every day, not less.

He’s smart enough to graduate college in basket weaving, phys ed, criminal justice, or some similar bullshit degree, but not smart enough to keep track of his own rifle. The upside of that is that stealing his firing pin will be easier.

Everyone under Clueless is counting the hours until the company commander finally figures out that one of his platoon commanders spends his free time chewing crayons. They just hope it comes before deployment, when some of them might have to patrol with him.

Quote: “I got this kickass rig online at Brigade Quartermaster. Yeah, it’s Kydex.”

One of the best things about the military is that it lets you play with cool toys. Don’t tell Lt. Tacticool that the the gear he’s issued is really all he needs, because that’s not the point. The point is to be just a little better equipped than anyone else. He spends his entire paycheck shopping online for the same gear used by Delta Force. Lt. Tacticool works in admin or in logistics or as a pilot. That doesn’t stop him from needing dumbass items like a drop holster that can’t be worn on a walk longer than 100 meters but looks absolutely badass.

If the gun doesn’t work, though, he’s got three concealed punch knives as backup. Don’t worry. He’ll make up for all the extra weight with $200 custom gel boot inserts.

That isn’t to say that there aren’t Tacticools in the infantry, but the laughter of their fellow lieutenants usually shames them into relative normalcy before too many enlisted grunts join in on the ribbing. These LTs live in closeted gear-queerness, wasting their paychecks in more subtle ways, like snatching up $1,000 GPS altimeter watches.

Quote: “I can’t believe they pay me to do this shit! HELLS YEAH!”

The Beast, on the other hand, does reside disproportionately in the combat arms. It’s just as well, because if he was in logistics, all his troops would be hiding under their desks by the end of the day. Everyone else groans when a unit hump is announced. The Beast adds extra weight to his pack. He says “If it ain’t rainin’, we ain’t trainin’!” unironically.

The Beast honestly can’t figure why others don’t enjoy it when things suck. He thinks “embrace the suck” is a religion, not a sarcastic comment. He’s into Crossfit, because of course he is. He’s also signed up for Tough Mudder, Spartan Race, and some obscure event involving dragging one’s testicles through broken glass for 26.2 miles in the Sierra Nevadas.

Quote: “My paper on military organization based on fractal principles is getting published in Joint Forces Quarterly next month!”

Lt. Nerd is, on paper, the perfect military officer. He went to a good school and was near the top of his class in all of his training. He’s read the Professional Military Education reading list through colonel. He’s working on his master’s degree. He’s even starting a new podcast next week, called Tactics Talk, so he can share his hard-earned wisdom with upwards of half a dozen people.

He is doing great, at least in his own mind. Unfortunately, the military is basically high school. The jocks run the school. Even though he has bars on his collar, the nerd gets no respect.

The prior-enlisted officer or “mustang” is definitely a little different than the typical lieutenant, not least because he’s nearly a decade years older than most of his peers. He has a few more tattoos than them, too.

Knowing the ropes is his superpower. PT, usually not so much. He’s gained a few pounds and and lost a few steps compared to his new young friends in the officer corps.

Most of the enlisted think it’s great that their lieutenant was once one of them. The platoon sergeant isn’t necessarily so thrilled. He’s pleased to get a lieutenant that he doesn’t need to hide sharp objects from. On the other hand, he can’t get rid of his lieutenant for a whole day by asking him to pick up a box of grid squares.

Quote: “Is THAT a wrinkle…ON YOUR UNIFORM!”

Military life naturally attracts those with attention to detail and a desire for order. Unfortunately, there can always be too much of a good thing.

You can generally find Lt. Niedermeyer in the parking lot, trolling for salutes — or, rather, for those missing salutes — so he can joyfully berate them. Of course, a true Niedermeyer counsels like a drill instructor — loudly, yet sans profanity, because profanity would be contrary to regulations. Doggone it, devildog!