A menage a trois on the high seas! Two naked German deckhands and five women on the go – no wonder British adventurer James Wharram was infamous for so much more than his daredevil Atlantic crossings

By JANE FRYER FOR THE DAILY MAIL

Boatbuilder, sailor, adventurer and designer James Wharram was a man of multifarious interests who approached life very differently from the rest of us.

He was obsessed with Polynesian fishing boats. Apart from sailing, he loved politics, reading — and strong, clever, independent women. And he was never the sort to tie himself down to just one life partner.

‘Many men are in need of two women in their lives, one to complement the other,’ he told the Sunday Pictorial newspaper in 1959. ‘Many are like myself and are capable of walking the tightrope of human relationships necessary to do it.’

Bob Saget was ‘tucked in bed’ and died in sleep without suffering at Orlando hotel… as police suspect star, who recently battled COVID, suffered ‘a heart attack or stroke’, and other top stories from January 13, 2022.

He was something of a celebrity at the time — frequently in the papers and on television with Sir Edmund Hillary in New York — because, three years earlier, he had made the 3,000-mile journey from the Canaries to the West Indies in a flimsy, 23 ft, plywood and glue, double‑sided canoe called Tangaroa. It was named after the Polynesian god of the fish and sea, and he had designed and built it in a barn near Manchester Airport.

No GPS in those days, of course, nor did he take a chart-plotter; no state-of-the-art gear. Nothing, really, that Christopher Columbus wouldn’t have used centuries before.

He took very few clothes (‘What’s the point when they get ripped off by the wind all the time’); more than 200 books, from Plato to thrillers; 300 lb of wheat and oats; 70 lb of discounted dates; and two coffee grinders. 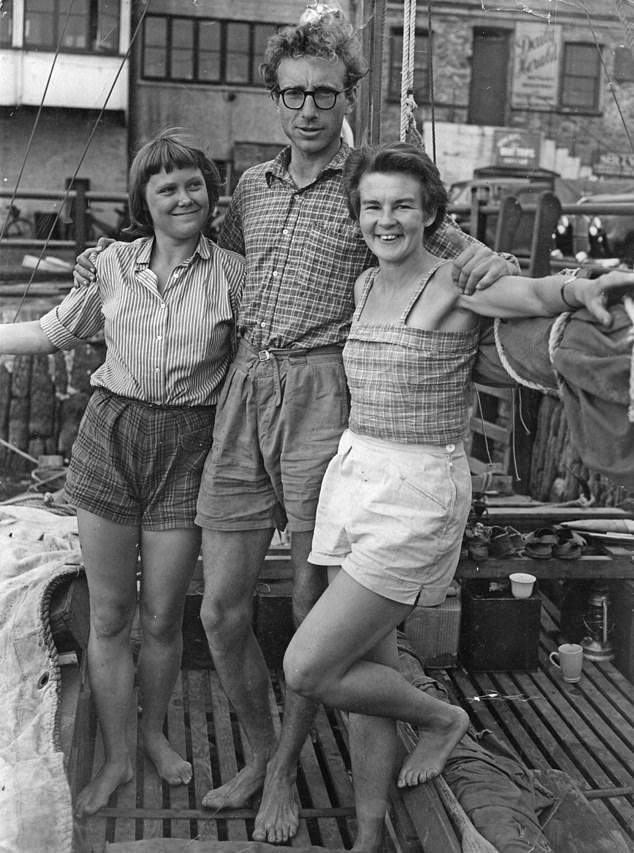 Shipshape: James Wharram with arms around Jutta (left) and Ruth in 1955

‘They are both in love with me and I love them. If I could marry them both, I would do it tomorrow but, sadly, it is not allowed,’ said James, who has just died aged 93 after an epic life of free love on the ocean wave.

So instead, they lived, and sailed, as a joyous nautical ménage à trois — the first of a series of similar arrangements that stretched happily through James’s wonderfully rich life.

Sometimes, like Jutta and Ruth, there were just the two ladies. Later, there were as many as five, who jokingly nicknamed him ‘His Lordship’. All were bright, boat-mad, strong, attractive and worked alongside him in his world-famous boat design business. Between them, they provided James with two adored sons, ganged up on him when he was annoying and laughed a lot. Somehow, it worked — for all parties.

‘We were both in love with this man and we were both happy and great friends,’ wrote Jutta and Ruth. ‘We were sharing not so much a man as an idea — and a life of freedom and achievement. We were never jealous.’

It is a sentiment mirrored more than 60 years on by Hanneke Boon, his final surviving life partner and soulmate, who spoke to the Mail this week from her home in Cornwall.

‘He was open and honest and appreciative of every woman for her own qualities. He never made one of us feel left out,’ she says. ‘Because it was always based on respect and openness and having a common aim and goal — building and sailing boats together. We had a goal we all worked on.’

Though on top of all that, James did, of course, have something else. Tall, strong-minded and charismatic, with enormous hands and feet, he had a zing, a spark, and a magnetism, according to Hanneke.

‘Yes, he was attractive. Physically, he was light and strong. He was true and honest to his ideals and he was sexually strong as well, so there was no problem that he had several women. That just gave him more vigour and strength,’ she says.

But for now, back to the winter of 1956, his epic voyage on Tangaroa with his crew of gutsy fräuleins.

For five long weeks, they wrestled towering waves, violent storms, and a marine termite that gobbled through a large section of the flimsy hull.

Sailing high: James’s catamaran the Spirit Of Gaia in 2018

‘Time and again, death seemed certain as our tiny craft was hurled about like a cockleshell in the mountainous rollers,’ James later recounted.

But they baled furiously, clung to each other and, whenever the sun appeared, lolled luxuriously naked.

Jutta, despite terrible seasickness, did the catering on a spirit cooker; Ruth, the navigating. They took turns to polish the deck, and goodness knows what else — and very happy they all were, too.

And when, finally, five weeks later, the boat was ripped to pieces on a reef off the coast of Trinidad, the girls stripped off and paddled to shore on rafts accompanied by a shoal of sharks, while James set off with a sharp knife in search of coconuts on another raft.

‘We were a very special sort of family,’ said Jutta. ‘Sex was only a tiny part of our very full lives and virtually unimportant, but we were two women and one man.’

And even in those teeny cabins, barely the size of an upended wardrobe, it did happen. Because soon, it transpired that Jutta’s seasickness was morning sickness and son Hannes was later born in Trinidad, where they lived in a bamboo raft house they built themselves.

All of which caused quite a ripple among the snooty sailing fraternity, who were already ruffled by James’s blunt comments about boat design — and his northern accent.

Some were outraged, others resentful and churlish — putting Tangaroa’s epic voyage down to wind ‘drift’.

Many were just downright jealous. After all, as James’s mother once put it: ‘They did look so very happy and healthy.’

Not that James cared.

‘What really got ‘them’ was that ‘my girls’ were not only good at sailing and navigation, but very good at building boats, too. And in addition, they looked beautiful,’ he said.

So, ignoring all the winks and nudges, the trio got to work building the marginally sturdier 40 ft Rongo, named after the Polynesian god of war, to sail back home again. Born in 1928, the son of a builder, James was never one to blend in with the other boys from his council estate.

As a child, he read obsessively, and from the age of 12 — when he was introduced to sailing on a trip on the Isle of Skye — almost all the books he checked out of Manchester Central Library were about boats.

‘I decided what I wanted to do was the sail the oceans,’ he said. ‘But specifically in boats in the ancient Polynesian construction of two joined canoes.’

Technical college was ditched when, for his 19th birthday, he received a passport for a climbing holiday in Switzerland.

It was here that his adventuring truly began — and not just up mountains.

His first love affair was with a Swiss girl who shared his birthday. Then there was the young Viennese psychologist whom, James claimed, saw him as ‘a wild, primitive sexual animal’; an actress who cost him a job when he missed a sailing to hook up with her; and Pat, an American who sent him a book called Boat Building In Your Own Backyard as a goodbye gift.

From then on, his passions were twofold — women and recreating the perfect Polynesian fishing boat.

He took jobs everywhere he could to learn his craft: on a Thames barge, in the stores at Thornycroft boat-builders and on a trawler off the west coast of Ireland.

He built the Tangaroa in 1955 while working on building sites where they called him ‘professor’ because he wore glasses and read sailing books during every tea and lunch break.

Having sailed to Germany and back, he prepared Tangaroa for its Atlantic crossing at Falmouth, despite endless warnings it would never succeed.

Even his father declared: ‘I wouldn’t sail that contraption on a pond in a park.’

The women, meanwhile, popped up, as if by magic, wherever he went. He met Ruth, a German au pair several years his senior in 1951 when he was pottering around the Lake District.

Three years later, he literally swam into Jutta, the daughter of an economics expert in the West German government, while practising underwater techniques in a pool in England.

All three had little interest in the dreary grey monogamy of post-war Britain and set up house together building boats.

After the nightmares of their first crossing in 1956, it’s a wonder any of them were up for the return. But they were — and it was far worse.

It took nearly ten weeks in terrible weather, their food ran out and they survived on scraps for the last fortnight.

But they did it, the first West-to-East crossing of the Atlantic by a catamaran.

On their return they established a thriving business in self-build James Wharram designs, first in Pembrokeshire, where his entourage expanded to five ladies, and later Cornwall.

Of course, it wasn’t all peace and love at Chez Wharram.

While he could be funny, loving, engaging and make quick, sometimes life-or-death decisions at sea, on shore he was lost.

‘He can be the most useless and stupid man, incapable of finding his own shirt,’ said Jutta.

He never learned to drive and left all the finances, cooking, cleaning and shoe cleaning to the women. 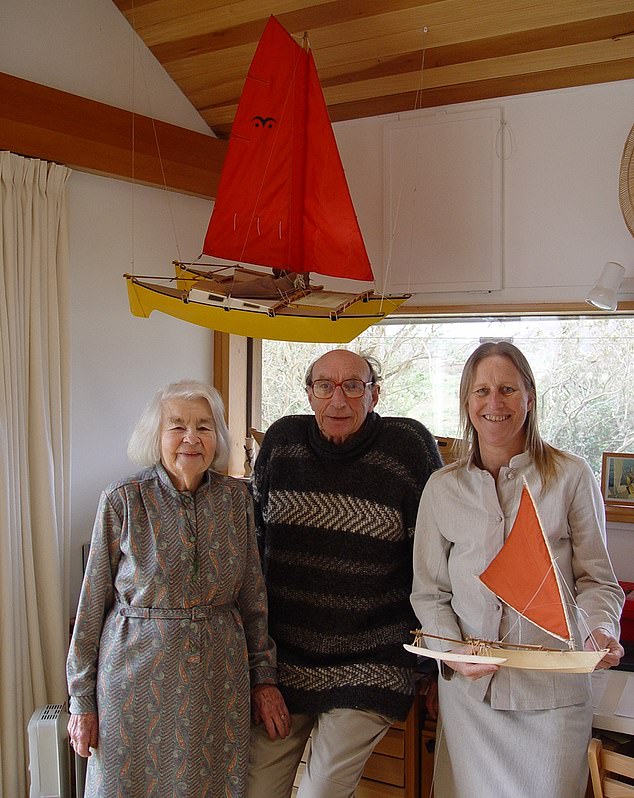 Close: An elderly James with Ruth (left) and Hanneke in 2005

The first major road bump came in 1961 when Jutta, who suffered from post-traumatic stress disorder from her wartime experiences at the hands of the Red Army, could suddenly cope no more and took her life, aged just 24.

Ruth and James were devastated. They limped on — caring for little Hannes — until others joined his entourage and filled the gap.

Hanneke first met James when she was just 14 and on a camping trip with her Dutch, boat-mad family: ‘My father was a sailor — we all were — and had read about James.’

They became an item five years later when he was in his 30s: ‘There was obviously a spark there.

‘At the time he was living with several other women — including the wonderful Ruth — so I joined a group, which I found rather attractive.’

They stayed together and Hanneke is mother to James’s second son, Jamie. Hanneke credits Ruth — rather than James — as the person who made it all work so well, because she made the whole set-up really welcoming.

Together, this new trio co-designed Spirit Of Gaia, a 63 ft catamaran, and between 1994 and 1998, sailed her round the world. In James’s 80th year, they undertook the Lapita voyage, a 4,000-mile trip following an ancient Pacific migration route on two double canoes, from the Philippines to the remote Polynesian islands of Anuta and Tikopia.

Five years later, Ruth passed away, but Hanneke and James continued to sail together until latterly, his battle with Alzheimer’s became too much for James to bear, and on December 14, 2021, he took his own life.

Perhaps because of his unconventional lifestyle, public recognition came late in life — in 2018 he finally won a lifetime achievement award from Classic Boat Magazine — but he wasn’t bothered.

Over 60 years, he and his team sold more than 10,000 sets of catamaran build plans to boating enthusiasts all over the world and he became a cult figure and hero in boating circles.

He also never lost his great enthusiasm for women — as lovers, friends, colleagues, crew — always insisting: ‘I couldn’t have achieved anything without ladies.’