It’s no surprise to us but Gun Owners of California’s late founder is still making the Left’s blood pressure rise. And boy, does this make us smile.

Long after he retired from the California State Senate, H.L. “Bill” Richardson continued to be a media favorite as the guy who would pull-no-punches and colorfully tell it like it is, whether it was about the 2nd Amendment, freedom or his love of America. And were he still with us today, we know damn well he’d stand proudly with the “domestic terrorists” – also known as concerned parents – who have had the courage to recently stand up to the jack-booted thuggery of our government and educational bureaucracy.

To see his name elevated by an East Coast Leftist as one of the chief architects of this current political movement thrills us at GOC to our core:

“One blueprint that conservative activists have adopted comes from the book “Confrontational Politics” by the late H.L Richardson, a former California state senator and gun-rights activist.” – Joseph D. Bastrimovich

True. The popular “Confrontational Politics” does provide a blueprint on how to engage effectively with the Left, and yes, it has been adopted by smart activists over the past 30 years. 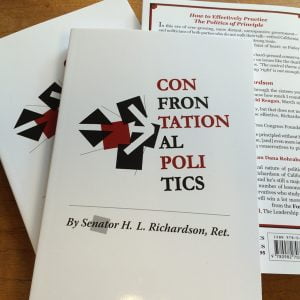 But then the fiction is rolled out:

“They’ve [activists] brought scrutiny upon themselves for aggressive tactics, which include being deliberately disruptive, shouting down school board members and even threatening violence toward those they see as enemies. These have become commonly used tactics for other conservative groups.”

Aggressive tactics? Deliberately disruptive? Threatening violence? At this point, I’d ask if the guy had even read the book, but realistically it doesn’t matter because he proves the book’s point that “Dogs bark, jackasses bray, snakes wiggle and liberals lie, it’s their nature to do so.”  Let’s leave it at that.

Throughout Richardson’s career and beyond, he called the Left out at every opportunity. Why? Because letting them march ahead without a challenge is a sign of weakness – and the Left knows most resistance on the right is exactly that…weak. That’s why learning how to effectively confront is key. To the average citizen, confrontation is not perceived as a tactic, a method of achieving a given end. However, to the Leftist, it is. To quote from the book, “they view confrontation as a verbal game, a form of semantic warfare to achieve a specific end, a strategy of bluff and bluster, a tactic used to accomplish a political goal, a technique to put an opponent on the defensive.”

The bottom line is that confrontation makes many people uncomfortable because it invokes negative emotions and is perceived as “unsociable behavior.” This actually makes the average American vulnerable, and often the victim of their own decency.

Liberals attribute our civility as weakness and deem our opposition to their agenda as desperate.  They think we are buffoons, simpletons, adhering to ideas that are no longer relevant. Thus, understanding their verbal strategies is the first step in being able to combat them – and make no mistake about it – combat them we must. To do otherwise is to abdicate not only the field of American politics, but our homes, families and businesses as well.

For every individual who challenges their local school board or battles unconstitutional gun laws in front of an over-reaching city council – becoming proficient in confrontation is a wise tool to have in your belt. Nothing annoys a Leftist more than an effective conservative.

There’s simply no need to avoid conflict – especially if done well and with control. There’s no need to be nasty. Use perseverance and professionalism. To be effective, positive confrontation requires a positive attitude.

There are teachable moments every step of the way as we battle the evils of the world. We must learn to build alliances and collect residuals in any and all confrontations with the Left – even when facing temporary setbacks or losses. From each conflict something can and must be gained – experience, friendships, political skills, fundraising files, and an evaluation of talent. Understanding how this works will prevent any wilting from the hot pressure of politics. Besides, the Left getting their panties in a bunch because parents are justifiably getting loud these days just demonstrates what a bunch of whiny, insecure adolescents they are.

In closing, GOC sends a big THANK YOU to Joseph D. Bastrimovich of National Park New Jersey, not for his defamatory remarks (read them HERE) about concerned parents, but for providing a brand new forum for GOC to highlight the value of Confrontational Politics (to his credit, Bastrimovich did link to a superb article on Richardson’s passing.)  But to see what all the fuss is about, you can secure your own copy of Confrontational Politics at the GOC store HERE.

GOC is encouraged by a newly energized electorate and is pleased to announce that we will be re-launching our Confrontational Politics workshops. For more information, contact us at (916) 984-1400 or email at [email protected]