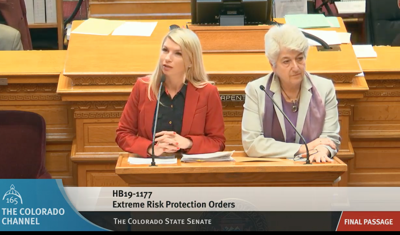 (The Center Square) – Lawmakers in Colorado’s Senate advanced three bills this week that seek to address gun violence – bills that have seen support and opposition break down along party lines.

House Bill 21-1255 modifies the requirements for gun ownership for people who have been charged with domestic violence or who have protection orders filed against them. It also requires a gun owner to file an affidavit with the court system within seven days of a court issuing a protection order.

The bill was introduced in April, prior to a shooting at a Colorado Springs mobile home park that left seven people dead, including the shooter. A report by 9News suggests that a domestic incident may have sparked the killing.

“Gun violence is an epidemic in the country,” Sen. Brittany Pettersen, D-Lakewood, a sponsor, said in a statement. “Every year it seems we are shocked by a horrific mass shooting that shakes us to our core. But it’s the countless other shootings happening every day that represent the deadliest component of this crisis. Domestic abusers and other violent offenders are largely unobstructed from buying a firearm – putting vulnerable families and communities at increased risk of lethal violence.”

Pettersen is also sponsoring another bill passed by the House on Tuesday – House Bill 21-1298. If passed, the bill would prohibit a person convicted of a violent misdemeanor from owning a firearm for five years.

The legislation would also close a common loophole in firearm purchases that allow buyers to receive their firearms within three days of submitting a background check, regardless of whether the buyer passed the check.

To help bolster the state’s gun control efforts, lawmakers are pushing a bill to establish the Office of Gun Violence Prevention within the Colorado Department of Public Health and Environment.

House Bill 21-1299 would create the office and empower it to conduct public awareness campaigns about gun violence and educate the public about existing laws and resources. This would include teaching people how to file Extreme Risk Protection Orders, according to the bill’s text.

HB21-1298 will be heard by the full Senate Committee of the Whole.