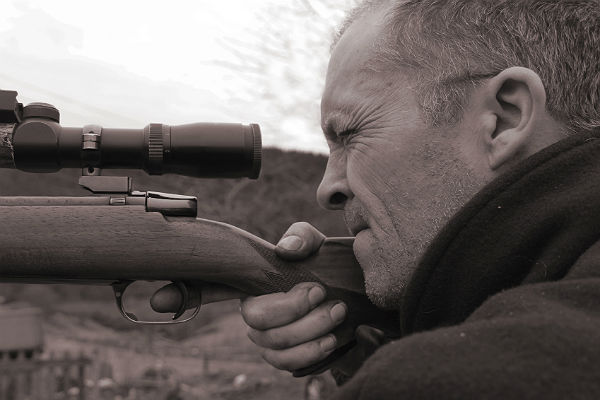 The semiautomatic M1 Garand has performed capably in the hands of thousands of hunters in the United States.
Military surplus rifles have been popular among hunters for many years, especially in the United States. Generally speaking, they are rugged, reasonably priced and relatively easy to obtain. They are also usually chambered in high-powered cartridges suitable for hunting most species of big game.
While they may not be capable of matching the performance of some of the more modern hunting rifles, a good military surplus rifle is still a great choice for a hunter on a budget.

The semiautomatic M1 Garand was a revolutionary rifle that served American soldiers well in World War II and Korea. It has also performed capably in the hands of thousands of hunters in the United States since then. Since it is chambered to shoot the mighty .30-06 cartridge, a hunter carrying a Garand is well equipped to pursue many species of North American big game.
The M1 Garand has a few disadvantages, though. It is heavy and difficult to mount a scope on (though it is possible). Another thing to keep in mind when hunting with a Garand is that many modern .30-06 high-pressure hunting loads are not safe to shoot in it. Either get an adjustable gas plug or only shoot ammunition that is within the pressure range that the Garand can safely handle.
As long as you keep the limitations of the rifle in mind, the M1 Garand is an excellent choice for hunters.

The Lee-Enfield rifle is particularly popular among those living in areas with lots of British influence, such as Canada or Australia. There are thousands of sporterized Enfields floating around in all of the former British possessions all over the world, and they are great rifles for hunters.
They also have a well deserved reputation for accuracy and reliability. Indeed, the Enfield is such a rugged and reliable rifle that they were used by the Canadian Rangers in the Arctic for decades until the government recently decided to replace them.
Most Enfields are chambered in .303 British, which is a capable cartridge that has been used by hunters to take nearly every species of big game on Earth.

If you are really on a strict budget but want a decent hunting rifle, then the Mosin-Nagant is the perfect choice. The Mosin-Nagant is not an elegant rifle and is instead the very definition of rugged and simple. They aren’t as cheap as they used to be, but it is still possible to find one for less than $300.
However, it is chambered to fire the potent 7.62x54mmR round, which is powerful enough for hunting most species of big game. Most specimens are more than accurate enough to ethically hunt big game at reasonable ranges. It is also possible to sporterize them by installing a new stock, mounting a scope or even doing some work on the trigger.
Even if you don’t want to make any modifications, a Mosin-Nagant will still make a good hunting rifle for most applications.

It’s tough to go wrong with any Mauser rifle. The Mauser revolutionized the way we look at rifles when it was first introduced and is still the standard by which bolt-action rifles are measured.
Millions of Mauser K98 rifles were produced by Germany, and many of them are now in the hands of collectors and hunters all over the world. They aren’t as cheap or as easy to find as they used to be, but surplus Mauser rifles are still nice choices for hunters.

Another contender for the title of the best military surplus rifle for hunting is the 1903 Springfield. It was designed to incorporate many of the features that made the Model 1898 Mauser such a great rifle. The designers were perhaps a little too successful in this regard because Springfield ended up paying royalties to Mauser for patent infringement.
As a result, the 1903 Springfield has many of the same strengths as the Mauser. It is also chambered in .30-06 Springfield, which is a definite plus. If you’re going to be hunting big game in North America, the .30-06 Springfield is almost never the wrong answer. The Springfield is also extremely accurate.
Unfortunately, they aren’t as cheap as they used to be. However, they are still a great rifle and are a worthy choice if you’re looking for a good hunting rifle