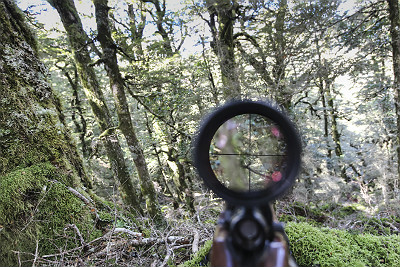 Unfortunately, many hunters do the vast majority of their shooting from a bench rest, which is not the best practice for taking shots under typical hunting conditions. Now I don’t know about you, but I’ve never taken a shot at a deer or any other big game species from a bench rest.
For this reason, it is important that hunters learn to shoot from positions they are more likely to use when hunting. This article describes my choices for the best hunting shooting positions and the advantages and disadvantages for each one.
There are four primary positions that most hunters and shooters use that I’ll discuss in this article. From least stable to most stable, these positions are: standing, kneeling, sitting and prone. All of these positions may be used both with and without additional external support, such as shooting sticks or a sling.
The descriptions of each position in this article are those that I’ve found are best suited for hunting and will not necessarily be the best choices for shooting in a competition. Additionally, the exact details of each position listed here are the ones that work best for me, which may not be the best for you.
Luckily, there are several variations of each position that you may use in accordance with your equipment, flexibility and the exact situation in which you may find yourself. Finally, keep in mind that I am left-handed, so all of the photographs of me demonstrating these positions will need to be reversed for a right-handed shooter. 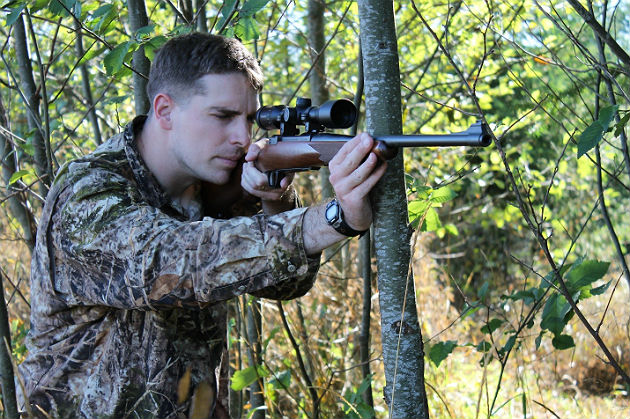 Be careful not to let anything touch the rifle barrel in the standing shooting position.

The standing shooting position is the fastest shooting position to assume. The standing position also typically gives the hunter the best field of view, allowing him or her to see over all but the tallest grass and brush. Unfortunately, the standing position is also the least stable shooting position.
However, this is not really a problem when shooting at close range. As a result, the standing position is most commonly used by hunters in thick woods who need to make a rapid shot at relatively close range. While the maximum range a hunter should shoot at using this position varies, I personally do not like to take a shot past 50 yards using an unsupported standing position.
During all of my years of hunting, I’ve only taken a handful of completely unsupported standing shots while hunting. However, every single one of them was at an animal that I encountered at very close range (5-20 yards) in thick cover. In these situations, my ability to take a rapid shot was more important than assuming a more stable shooting position.
When possible, I use a supported shooting position. Support can come from a variety of sources: shooting sticks, a tree, etc. Of these, a tree is my favorite choice because I don’t have to carry it with me, and there is almost always one within easy reach when walking through the woods.
When using a tree (or similar object) for support, simply take your nondominant hand and form a “V” with your thumb and index finger. Cradle the stock of your rifle in the “V,” and use your thumb to grip the tree and your fingers to grip the side of stock, pulling the rifle snugly against the tree.
Depending on what side of the tree you are shooting from, you may reverse this configuration and use your fingers to grip the tree and your thumb to grip the stock. Either will work, as it all depends on the situation and what works best for you. Whatever you do, make sure that nothing touches the barrel of the rifle, as this will negatively affect your accuracy. 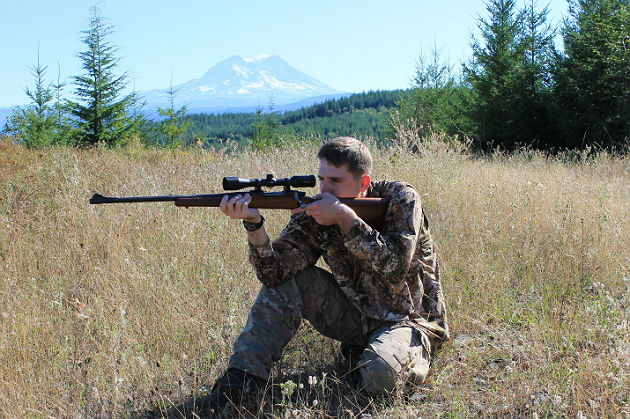 See how my left elbow is unsupported in the kneeling shooting position?

The kneeling shooting position is the second-fastest shooting position to assume, and when done correctly, provides a fairly stable shooting position. Unfortunately, only one elbow is supported when using the kneeling position, which is obviously not ideal. The kneeling position also gives the hunter the ability to see over brush, grass and other things obscuring the target, though not as much as when standing. At the same time, the kneeling position also presents a smaller, more difficult to spot profile.
The kneeling position is a good one to use when the hunter doesn’t have much time to take a shot, or needs to shoot over brush or grass obscuring the target, but the target is too far away to take an ethical shot while standing.
To assume a kneeling position, place your dominant-side knee on the ground at an approximately 90-degree angle from your nondominant knee. If you can, turn your dominant-side foot so that as much of it as possible contacts the ground, then sit on your foot. This will provide a more stable position than sitting on your heel. However, not everyone is flexible enough to do this, so do what works best for you.
Rest your support-side arm on the front of your nondominant knee using the flat, meaty part of your arm just above your elbow. Do not rest the “point” of your elbow on your kneecap, as this will provide an unstable platform.
Though not demonstrated here, the kneeling shooting position may also be used in conjunction with other forms of support such as shooting sticks or a sling to make it more stable. When ample time and resources are available, it is always a good idea to use additional measures to assist you in making your position more stable. 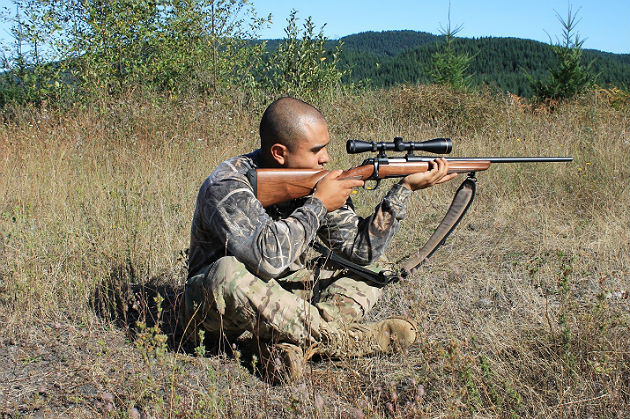 The sitting position provides support for both elbows. 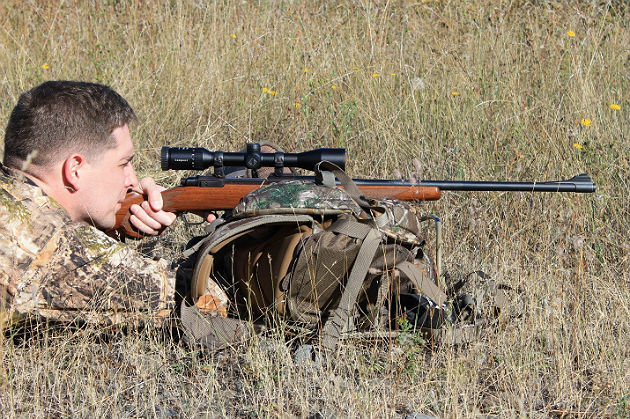 Note how high the grass is compared to my line of sight in the prone shooting position.

The prone position is the slowest position to achieve, but it is the most stable. Since the hunter is so close to the ground when prone, this makes it easier to hide from game without being spotted. However, this also makes it difficult for the hunter to see the target if there is any grass or brush in the way.
Because of these disadvantages, the prone position is only the best choice when there is plenty of time to prepare for the shot and when there are no objects in the way to obscure the target.
To get into the prone shooting position, assume the push-up position behind your rifle. Then, lower your body to the ground straight behind your rifle with your nondominant hand supporting the forend of the rifle, as close as possible to being directly below it.
Next, spread your legs and point your toes outward with your ankles flat on the ground. Not everyone will be able to do this, but the idea is to get as much of your body as possible in contact with the ground. Then, pull the butt of the rifle firmly into the pocket of your shoulder with your dominant hand.
Though it is possible to shoot from the prone position in both a supported and unsupported manner, if you have enough time to get into a good prone shooting position, then you likely have enough time to use some form of support. Doing so will dramatically increase your stability and make shooting at long distance much easier. Support can encompass a wide range of objects such as a backpack, a log or a bipod.
When using a “soft” form of support, such as a backpack, place the forend of the rifle directly on it. When shooting across something harder, like a log or a rock, it may help to place some form of padding between the rifle and the object, such as a rolled-up jacket. Do not let anything directly touch the barrel, as this will adversely affect your accuracy.
Additionally, it is always a good idea to use some form of support beneath the rear of the rifle’s stock, if possible. You can purchase a purpose built monopod or shooting bag for this purpose, or you can just use an old sock filled with sand or beads.
Using your support hand, place the bag beneath the rear sling swivel and increase or decrease pressure on it to depress or elevate your muzzle. Using a rear bag makes the prone shooting position even more stable and a good shooter is capable of excellent accuracy when using one. 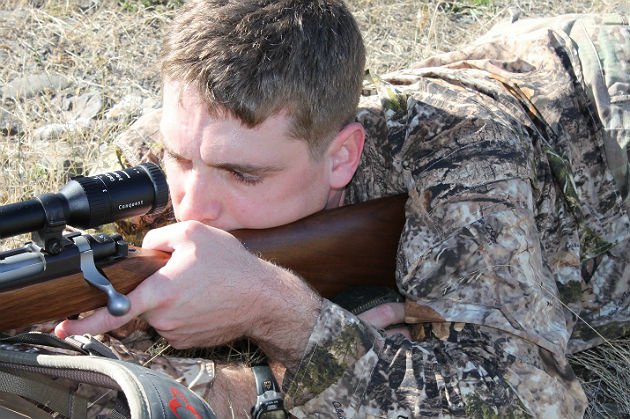 Note the black and green sock beneath the butt of the rifle.

Keep in mind that there is no “best” hunting shooting position for all situations. Each position has strengths and weaknesses, and it is up to the hunter to choose the position that allows him or her to take the most accurate and ethical shot.
For this reason, it is important that you are familiar with several different positions and have practiced them during the offseason. This will enable you to determine exactly which positions work best for you so you can assume the most appropriate shooting position quickly and make a good shot when it counts.