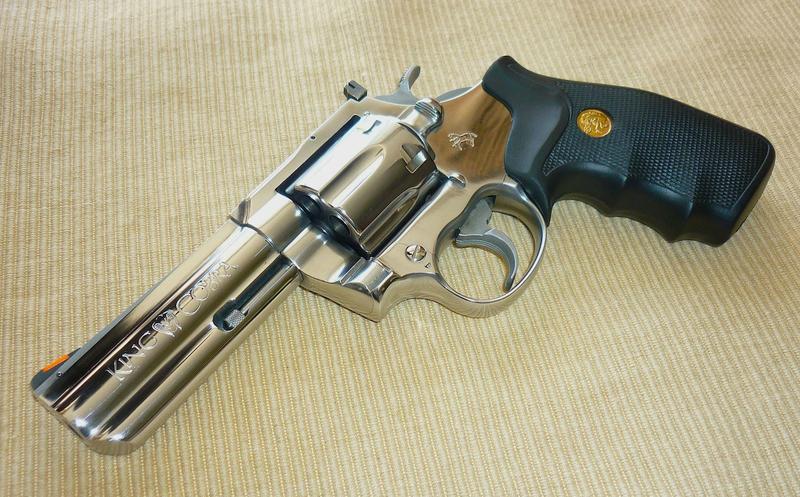 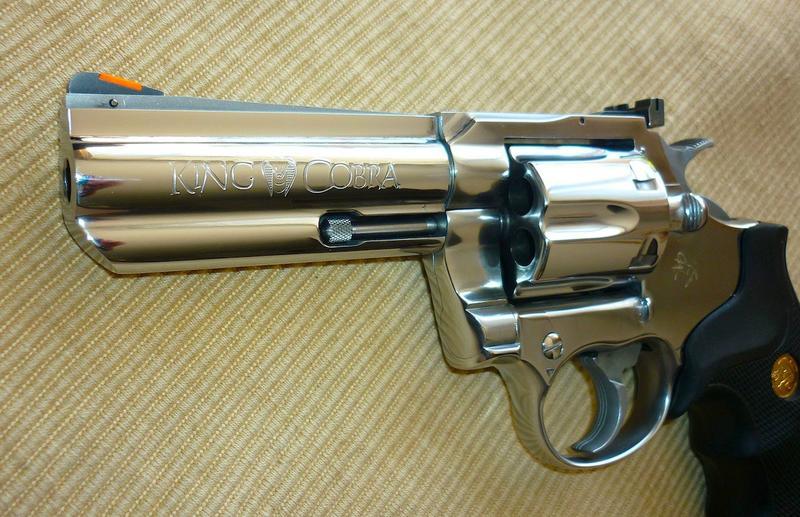 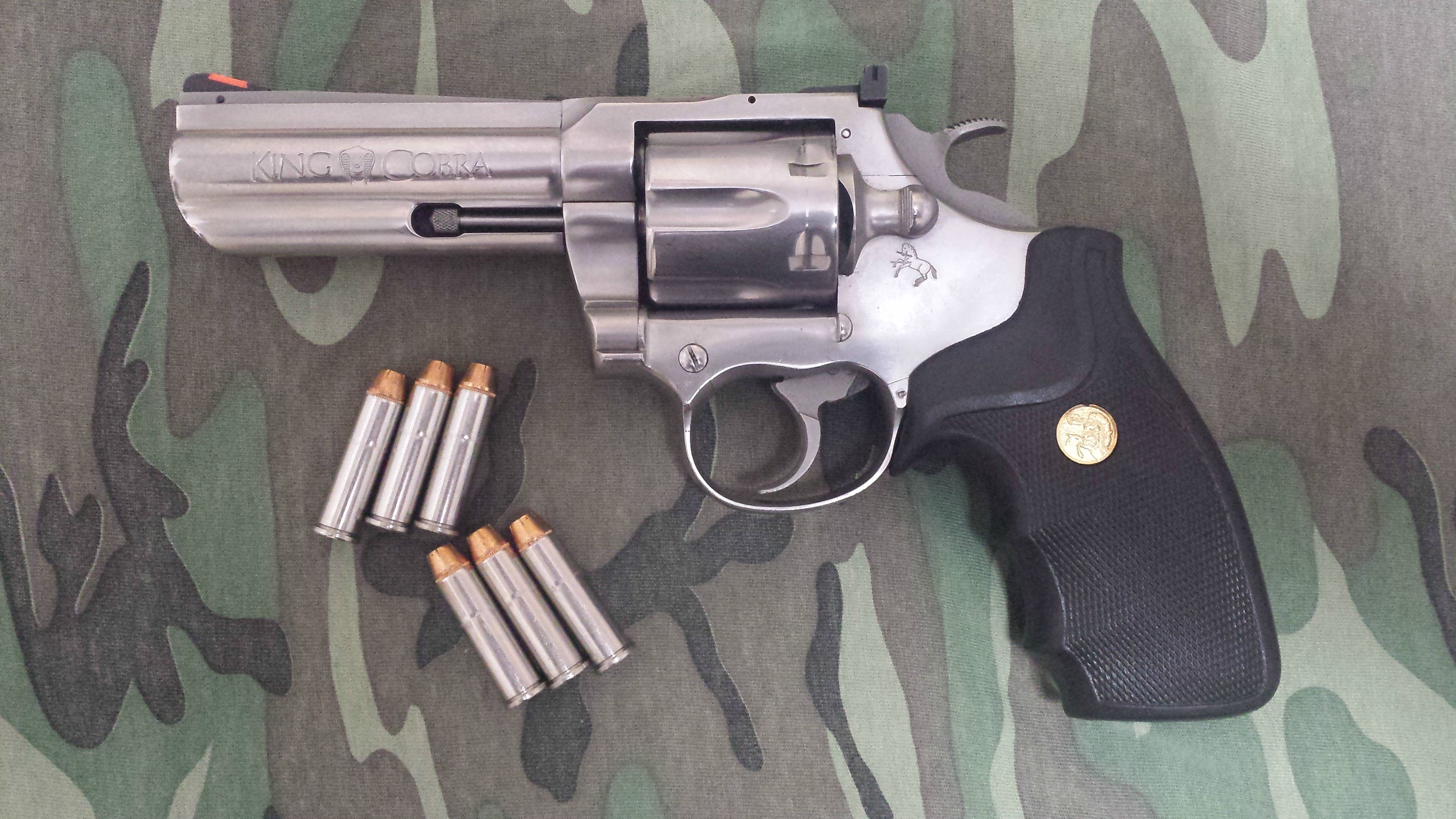 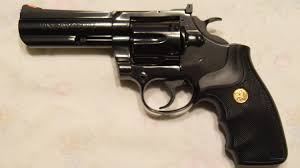 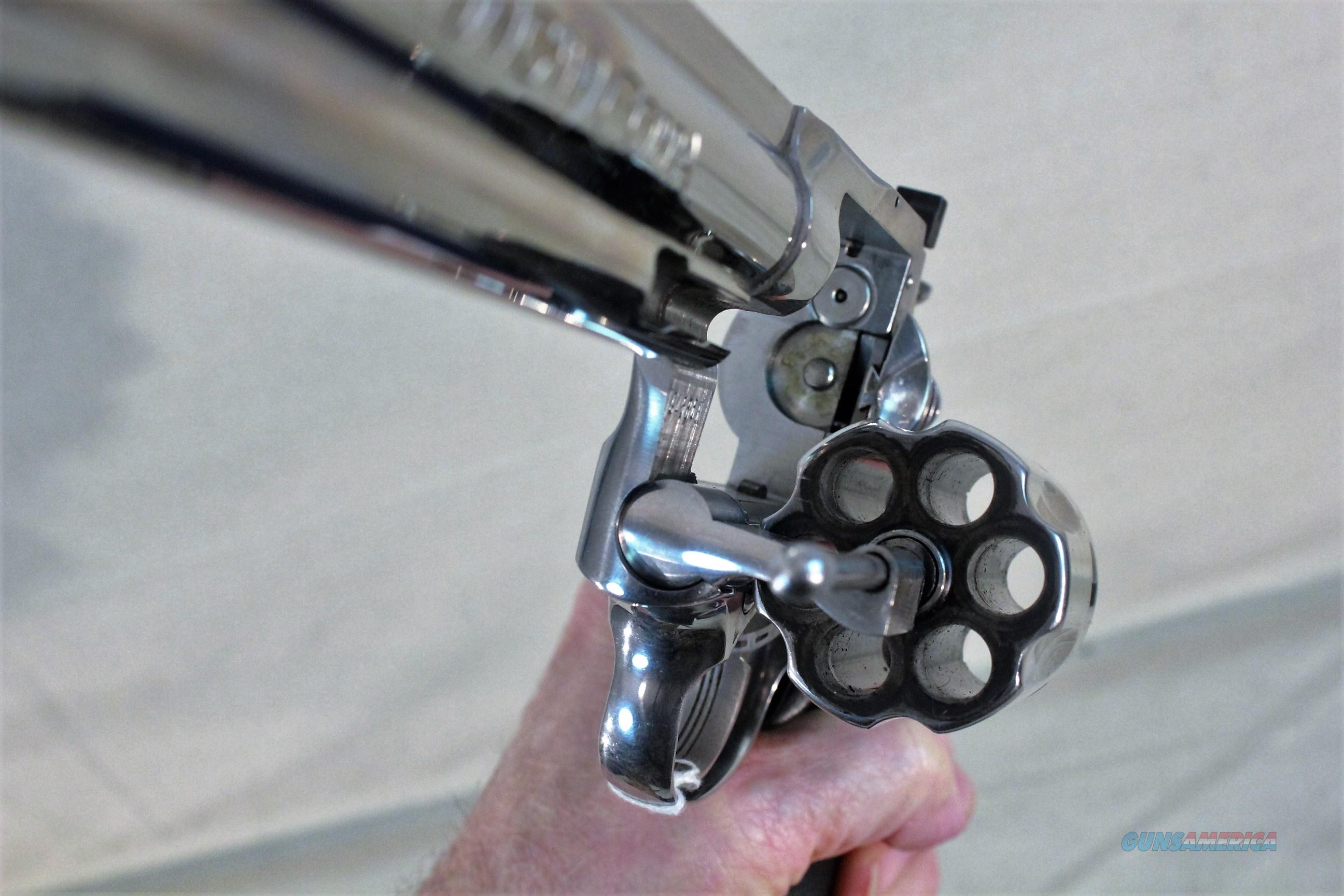 First introduced in 1986, the Colt King Cobra is a medium framedouble-action revolver featuring a six round cylinder which was designed and produced by the Colt’s Manufacturing Company and marketed to law enforcement agencies and civilian firearms enthusiasts.
Available in blued and stainless steel finishes in a variety of barrel lengths and chambered for centerfire .357 Magnumammunition.[1]

Despite the presence of a ventilated rib atop the barrel and its outward similarity to the Colt Python/[] The King Cobra design is based upon that of an earlier Colt model.
The venerable Trooper MK V, improved with the addition of a heavier-duty barrel, full barrel length cylinder ejection rod protection shroud, and the aforementioned thicker solid rib on top of the barrel.
The King Cobra was introduced in 1986, discontinued in 1992, and returned to Colt’s product line in 1994. Dropped a second time in 1998, it has not been produced since.[3]

Built on Colt’s medium-size ‘V’ frame from 1986-1992, the King Cobra was offered in very hi-grade carbon steel with Colt’s signature bright and highly-polished deep royal blued finish. From 1987-1992 and 1994-1998 matte stainless steel was offered, and from 1988-1992 the option of polished stainless steel became available as well.
King Cobras are equipped with either oversized Walnut target-style or hard rubber black finger-grooved combat-style grips, and an enlarged targethammer.
The Cobra’s sighting system consists of a fixed iron red insert front sight and a fully adjustable iron white outline rear.[1] Various barrel lengths were offered over time according to the finish option chosen.[1]
In blued steel models, 4 and 6 inch barrels were available from 1986 until the blued guns were dropped from production in 1992, also a 2.5 inch length was offered with the blued finish from 1990-1992.
In matte stainless, a 2.5 inch length was cataloged from 1987-1992, 2 inch barrels were offered from 1988 until King Cobra production ceased in 1992 and then again from 1994-1998.
Barrel lengths of 4, 6, and 8 inches also were available on models with the matte stainless finish from 1990 to 1992; they returned to the product lineup from 1994-1998.
In the mirror bright stainless finish, 4 and 6 inch lengths were offered from 1988-1992, a 2.5 inch was available from 1990-1992, and the 8 inch length was offered from 1989-1992.
The King Cobra is chambered for the powerful .357 Magnum cartridge, but like all .357 revolvers will also fire .38 Special ammunition.[1]
In its final year of production (1998) the top strap was drilled and tapped for the mounting of scope rings.[3]
Colt also produced a total of six King Cobra’s with three-inch barrels and fixed sights. These were made for the Montreal Police Department, which had expressed an interest in such a model for plain-clothes officers.
The revolver was never adopted and the six samples were returned to the distributor. One surfaced in North Carolina in 2006, was lettered by Colt Archives, listed on Gunbroker, and is now in the hands of a private collector. The fate of the other five is unknown.
Like all .357 Magnum revolvers, the Colt King Cobra could chamber and fire the shorter but otherwise dimensionally similar .38 Special cartridge.