More
SUBSCRIBE
In the history of firearms, the military double rifle invented by British Gen. John Jacob of the Indian Army was probably one of the most ambitious and as the same time one of the most outlandish designs ever devised.
General Jacob was a fascinating person—one of those larger than life mid-19th century characters whose career reads more like a novel than fact. He tamed great portions of India’s wild Northwest Frontier, set up civil administrations and generally did a splendid all-around job of soldiering. A town was even named after him, which still exists in Pakistan.
As an improvement on the British-issue Brunswick Rifle, which fired a belted round ball, he devised a symmetrical conical projectile with studs that mechanically fit in the rifle’s bore, giving far better accuracy than the Brunswick. He continued his work, to include the invention of a bullet with a fulminate nose plug that exploded upon contact that was felt would be great for blowing up enemy artillery caissons at long distances. At about the same time he became infatuated with the idea of the double rifle, and figured that style would perfectly suit his rifling system and would be just the ticket to issue to his troops.
What Jacob finally came up with was a very elaborate and expensive percussion double-barreled rifle of 32 bore (0.524 caliber.) The barrels measured 24 inches and the gun’s overall length was only 40 inches. It weighed 9 pounds and sights were graduated to a very optimistic 2,000 yards. The 6-inch-long rear leaf was so contrived that to use it at an extreme range it had to be fired from the chest. He also designed an elaborate basket-hilted broadsword-style bayonet that was just about as long as the gun. The bayonets are also much sought after by collectors and are actually probably rarer than the rifles themselves.
In the mid-1850s Jacob contracted with British gunsmith Swinburn & Son to make the unusual arms. Each rifle had a special patchbox proudly engraved with the proposed unit’s name, “Jacob’s Rifles.” In 1858 he decided to raise a battalion of native riflemen to be armed with his double gun. “Jacob’s Rifles,” as the unit was to be called, would number about 1,000 officers and men, about 900 of whom would have Jacob’s very expensive and complicated rifles.
Although Jacob died of “exhaustion” on Dec. 5, 1858, Swinburn & Son fulfilled the contract; however, after his death, the rifles issued to troops were put back into stores and the troops were given more conventional longarms. Ultimately the doubles were most likely released from service and sold. The famous American surplus dealer Francis Bannerman even lists them in his early catalogs, calling them “Elephant Rifles.”
Actually, while not particularly suited to military use, they turned out to be pretty good hunting guns, and some sporters on the Jacob system were made by other firms. The explosive bullet idea even flourished for a time for use on thick-skinned game like rhinos and elephants.
The example seen here, dated 1860, is in surprisingly good condition, exhibiting about 90 percent of the original finish on the barrels, a modicum of case hardening and a perfect bore. As some of the guns saw hard use, probably as hunting pieces, it is not unusual to find them in much poorer shape. While not common, military Jacob Rifles do turn up from time-to-time. One in this shape is worth in the $5,500 to $6,500 range. Not bad when one considers the romance, ingenuity and determination involved in getting this gun built in the first place.
Gun: Jacob Rifle
Manufacturer: Swinburn & Son
Caliber: .524oio
Condition: Excellent (NRA Antique Gun Standards)
Manufacture: 1860
Value: $5,500 to $6,500
Serial Number: 251
Here is some info about the man behind the gun:

Brigadier-General John Jacob CB (11 January 1812 – 6 December 1858) was an officer of the British East India Company who served in colonial India for the major portion of his career.
He is known for the cavalry regiment called 36th Jacob’s Horse, and for founding the town of Jacobabad, where he planned and supervised the transformation of thousands of acres of desert into arable land, in just twenty years.
The scale of progress and prosperity his works brought to the region can be very well appreciated by comparing it with the contiguous areas in today’s Baluchistan which were not under his administrative jurisdiction.[1]

He was born at Woolavington, in the county of Somerset, England, where his father the Reverend Stephen Long Jacob was incumbent.[2] His mother was Susanna, daughter of the Reverend James Bond of Ashford, Kent, England.[3]
He was schooled by his father until he obtained his cadetship to Addiscombe Military Seminary.[4] A number of the young cadets there who were his contemporaries, included such famous officers as Eldred Pottinger, Robert Cornelis Napier, Henry Mortimer Durand, Vincent Eyre and others.[5]
He was commissioned into the Bombay Artillery (Bombay Army) on his 16th birthday, and subsequently sailed for India in January 1828, never to set foot in England again.

After seven years employed with his regiment, he was then employed as subordinate to the collector of Gujarat. In 1838 he was ordered to Sind with the Bombay column, to join the army of the Indus at the outbreak of the First Anglo-Afghan War.
He first saw active service in the summer of 1839 as a subaltern of artillery, the force led by Sir John Keane, sent to invade the Upper Sindh.
He was given command of the Sind Horse by Sir James Outram in 1841; in 1842 he was additionally placed in political charge of the whole of the Cutchee frontier.
He saw his first major action as Brevet Captain at the Battle of Meanee, with the British force sent to conquer Sindh. He was made a Companion of the Order of the Bath.
He set about to recruit a second regiment of Sind Horse, which Napier announced in a letter dated 28 November 1846 would be called Jacob’s Horse.
As Irregular Cavalry, each regiment had only three European officers, a system that Jacob argued should be extended to all Indian cavalry regiments.[6]
Both regiments were absorbed into the Indian Army in 1860 and ultimately became the 35th Sind Horse and the 36th Jacob’s Horse.
They saw active service in Northern and Central India, Persia and Afghanistan, and during World War I in France. They were amalgamated in 1921 and became known as the 14th Prince of Wales’s Own Scinde Horse.

In 1847 Jacob was placed in political charge of the frontier and established his headquarters at Khangurh. At the time he set foot on there, the area was known as Upper Sind ‘desert’, littered with marauders who looted for living.
At the first place he restored peace in the area by thoroughly defeating the predator tribes. Then he started building infrastructure for the town, (at the village of Khangurh and its surroundings).
Being an architect and an engineer himself, he designed and then executed the plans of laying a wide road network around the town that measured a good 600 miles (965 km).
In that he resolved the problem of unavailability of potable water for the residents by excavating a tank that contained water brought from Indus through a canal.
His biggest and most important feat was the excavation of Begaree Canal, originating from Guddu barrage on river Indus, going round the district irrigating thousands of acres of land previously uncultivated, thereby providing means of living to thousands of people.[1]

He wrote many pamphlets which were critical of the Indian Army as it then was, and got him into much trouble with the Government in London.
He was a scientist and inventor, developing an exploding bullet,[6] or shell, that fired combustibles up to 6 miles (9.7 km).
He believed this would revolutionize the art of war. Two good riflemen could, in his opinion, annihilate the best battery of field artillery in 10 minutes.
Further experiments made it possible to fire shells up to a range of 14 miles. More importantly, he designed a four grooved rifle and had various experimental guns manufactured in London by leading gunsmiths, and at his expense.
In April 1855 he was gazetted Lieutenant-Colonel.[6] In 1856, due to Sir Bartle Frere’s poor health, he taking leave in England, Jacob was pronounced Acting Commissioner in Sind.[6] 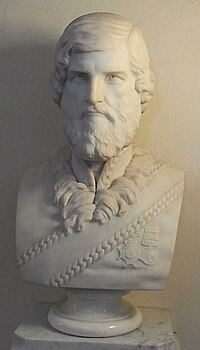 At the outbreak of the Anglo-Persian War, Jacob was put in charge of the cavalry and departed for Persia.
He was raised to the rank of Brigadier-General,[7] and appointed Aide-de-Camp to Queen Victoria. When he arrived at Bushire, General Stalker having suddenly died, Jacob was put in charge of 3000 men.
Peace favourable to the British Government having been negotiated, Jacob was left in charge of conducting the evacuation of Bushire.
A month after the end of hostilities with the Persians, the Indian rebellion of 1857 had broken out; Jacob’s Horse remained loyal throughout.
He was anxious to return to India, as he had been selected for the command of the Central Indian Army. He was delayed in Bushire on the insistence of the British minister there, and Lord Elphinstone was unable to await his arrival; the command was given to Sir Hugh Rose instead.[8]
Jacob returned to Jacobabad where he raised two regiments of infantry. The 130th Baluchis and 26th Jacob’s Mountain Battery are named after him.
He died of ill health at Jacobabad on 6 December 1858.[6] He was buried in the town where his grave has been well-maintained by the locals for whom he retains a cult status, and, according to BBC correspondent Mark Tully locals believed he had saintlike status.[9]

Though Gen John Jacob had undoubtedly his professional sincerities to the British Rule but his emotional links with the people and the area were deep-rooted, thereby believing in involving the locals in works of common good, a virtue not so common in the officers of British Raj.
He put those men to work, for themselves, who would prefer to starve rather than touching a spade or a hoe. His formula was simple, yet effective.
He would divide the work into small chunks and distribute it among families who, being dead sure on fair return on their hard work, completed the tasks very honestly and well in time.
Jacob noted in one of his writings that he saw the men working well into the night without any order or obligation from the authority.
Known as a man of justice, humanity, eccentricity and marvelous talents, Jekum Sahib Bahadur’ never advocated exploiting the labour by no or paltry wages. He believed it would bring nothing but chaos and ever-decreasing revenue over a certain area or headcount.[1]
It was his subjects who took to calling the new settlement ‘Jekumbad’ after their much admired ‘Jekum Sahib Bahadur.’ And Jekumbad it is even today on the lips of the illiterate.[10]
Not long after Jacob’s death the simple grave turned into a shrine for Muslims and Hindus alike for an oil lamp could be seen burning at its head.
This practice, according to Lambrick,[11] was discontinued on the orders of the Executive Engineer in the 1930s for the oil from the lamp left a messy stain on the grave.
But still, many of the Baloch villagers visit the tomb, pray for the health of an ailing child or for happiness and wealth.
Among his descendants, were Lt. Gen. Sir Ian Jacob, KBE, CB, a former Director-General of the BBC, Prof. E. F. Jacob, a historian; and Doctor Gordon Jacob, the composer.[11]

Its such as you learn my thoughts! You seem to grasp so much about this, such as you wrote the book in it or something. I think that you just could do with a few to power the message home a bit, however instead of that, that is magnificent blog. A fantastic read. I will definitely be back.

Thank you for the kind words! Grumpy