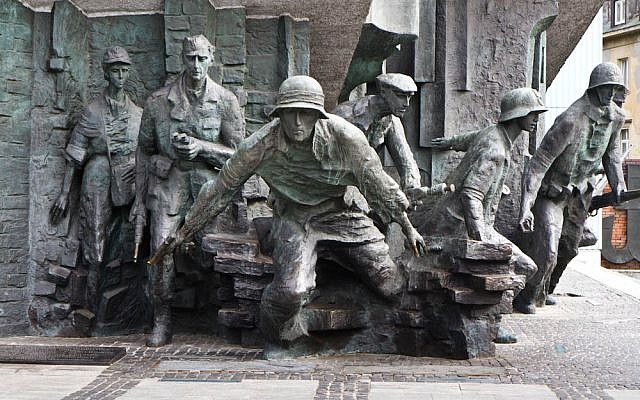 Monument to the Warsaw Uprising

I stood on a balcony in Warsaw this past week to gaze at the Vistula River. The Vistula runs wide and deep, the guardian of Warsaw from the east. Poland has seen existential threats from all directions. In the 20th century, the danger came from Germany to the west and from Russia to the east. Poland was once an empire, but for much of its recent history, it has been a victim. And the Vistula is where we must remember an episode that may not have resulted in the most Polish deaths but that nonetheless exemplifies the brutality and betrayal that was visited upon the country not so long ago.

In 1945, Germany was collapsing. A quasi-government in Poland called the Lublin Committee was emerging from the ashes, preparing to build a free Polish government and allow Poland to take control of its destiny. The future of Poland had been discussed extensively at the meetings of the big three – Roosevelt, Churchill and Stalin. Roosevelt and Churchill favored the Lublin Committee. Stalin was appalled. For Stalin, a pro-Soviet or at least a Soviet-controlled Poland was essential. Then as today, the Russian objective was strategic depth. Moscow had nearly fallen to the Germans, saved only by winter and distance. Controlling Poland was a simple matter of safety. Moscow therefore wanted the Lublin Committee replaced by a communist government under Russian control.

Roosevelt and Churchill opposed this, but they had a different sense of Stalin and how to handle him. Churchill saw Stalin as the moral and strategic danger to their plan to spread liberal democracy to the east. Roosevelt believed that whatever Stalin might be, he had to be persuaded that the Lublin Committee would not pose a threat to Russia. Roosevelt believed deeply in the power of personal relations to the point that it might overwhelm geopolitical imperatives. I don’t think he was naïve, but he believed Stalin had the upper hand militarily and that the only viable option was trying to convince him that the U.S. and Britain had no bad intentions. What was benign to them was a mortal threat to Stalin. Even so, Stalin indicated vaguely that the Lublin Committee would be respected.

During World War II, as the Russians approached Warsaw from the east, the Polish Home Army, a resistance force inside Warsaw, rose up against the Germans. At this moment, Stalin halted the Russian advance. His explanation was that Russian forces needed to regroup and be resupplied. Warsaw was Stalin’s for the taking. Some reorganization might have been needed, but the Russian army stopped for weeks. The Germans carried out the slaughter they were famous for, decimating the Home Army and allowing Russia to enter Warsaw as the only force capable of governing. The Lublin Committee was brushed aside, and a communist party subservient to Russia was imposed, remaining in power until the Soviet Union fell. In other words, Stalin stopped to give Hitler time to slaughter Stalin’s Polish enemies, and once completed, Stalin advanced into a devastated city.

This is where the Cold War began. Stalin did not trust Churchill or Roosevelt. In his view, Russia paid the price for crushing Hitler – in spite of the fact that he had allied with Hitler to invade and divide Poland in 1939. Roosevelt believed he could forge personal trust with Stalin to avoid conflict, which was perhaps the only course possible since a Western military insertion into Poland was impossible. The deep doubts about Russia were frozen into a long-term distrust and created 46 years of conflict.

When I stepped out on that balcony in Warsaw, a cocktail in hand, I did not know that this was the river behind which Stalin halted, and to my rear was the city where he welcomed Hitler’s slaughter of the Poles. I saw a deep and deceptively calm river but could not see the blood that had been spilled to assure Russia’s strategic depth. The irony was that I was in Warsaw to address the strategic challenge posed in 2022 by Russia in Ukraine, the massive Polish effort to sustain the Ukrainian resistance, and my own country’s presence in Poland, supplying weapons to Ukraine and with the 82nd airborne deployed.

Russia continues to seek strategic depth all these years later, and continues the contest it began on the banks of the Vistula. Russia lost Poland, and now it’s fighting a war to take hold of Ukraine. It no longer has a Germany to do its dirty work. But it is important we remember the manner in which Russia pursues imperatives: What Moscow must have generates its operating principles. It cannot give up the search for strategic depth, nor can it obtain it without the ruthlessness reality demands. But history has a great sense of humor and demands patience. How much patience Ukraine can muster is, of course, unclear. How many times Russia must play the same game is even more so.

SACRAMENTO –  The California Department of Justice has announced that personal information was disclosed in connection with the June 27, 2022 update of its Firearms Dashboard Portal. Based on the Department’s current investigation, the incident exposed the personal information of individuals who were granted or denied a concealed and carry weapons (CCW) permit between 2011-2021. Information exposed included names, date of birth, gender, race, driver’s license number, addresses, and criminal history. Social Security numbers or any financial information were not disclosed as a result of this event.

Additionally, data from the following dashboards were also impacted: Assault Weapon Registry, Handguns Certified for Sale, Dealer Record of Sale, Firearm Safety Certificate, and Gun Violence Restraining Order dashboards. DOJ is investigating the extent to which any personally identifiable information could have been exposed from those dashboards and will report additional information as soon as confirmed.

“This unauthorized release of personal information is unacceptable and falls far short of my expectations for this department,” said Attorney General Rob Bonta. “I immediately launched an investigation into how this occurred at the California Department of Justice and will take strong corrective measures where necessary. The California Department of Justice is entrusted to protect Californians and their data. We acknowledge the stress this may cause those individuals whose information was exposed. I am deeply disturbed and angered.”

On the afternoon of June 27, 2022, DOJ posted updates to the Firearms Dashboard Portal. DOJ was made aware of a disclosure of personal information that was accessible in a spreadsheet on the portal. After DOJ learned of the data exposure, the department took steps to remove the information from public view and shut down the Firearms Dashboard yesterday morning. The dashboard and data were available for less than 24 hours.

In the coming days, the Department will notify those individuals whose data was exposed and provide additional information and resources. California law requires a business or state agency to notify any California resident whose unencrypted personal information, as defined, was acquired, or reasonably believed to have been acquired, by an unauthorized person.

DOJ asks that anyone who accessed such information respect the privacy of the individuals involved and not share or disseminate any of the personal information.  In addition, possession of or use of personal identifying information for an unlawful purpose may be a crime. (See Cal Penal Code Sec. 530.5.)

We are communicating with law enforcement partners throughout the state. In collaboration, we will provide support to those whose information has been exposed.

Any Californian may take the following steps to immediately protect their information related to credit:

I bet that this puppy is a whole lot of fun when it comes time to clean it! Comments anybody out there? Grumpy