In the last 10 years we have seen a number of cartridges introduced that all have similar design characteristics. They have a relatively short, minimum-taper cartridge case with sharper shoulder angles, moderate capacity, fast twist rates, what would seem to be heavy bullets for the case size, and chamber throat designs that are long and tight.

A few examples of these cartridges are the .300 WSM, 6.5mm Creedmoor, 6mm Creedmoor, and most recently the .224 Valkyrie. All of them deliver downrange performance and accuracy beyond anything that would be expected from a cartridge of their size. So what exactly is behind this shift from traditional cartridge designs with a big case pushing a projectile at high velocity?

Let’s start by looking at the design characteristics of several long-standing traditional cartridges. This design philosophy, for the most part, has used a big case with a lot of taper and a modest shoulder angle with a lot of propellant behind a medium-weight projectile. This formula is about generating speed.

A lot of case taper was considered necessary for reliable extraction, and modest shoulders were easy to produce. Some examples are the .22/250 Remington, .243 Winchester, .264 Winchester Magnum, and .300 Winchester Magnum. These cartridges all have moderate to slow twist rates and relatively modest weight projectiles. The bottom line is their designers wanted bullets to go fast. The tables on p. 45 show a comparison of these four traditional cartridges and their modern counterparts.

All About the Bullet

Today, cartridge and ammunition designers are putting much more emphasis on projectile performance characteristics. If I could sum up this philosophy, it would be “let the bullet do the work.” In other words, design a cartridge that can use a heavy, very aerodynamic projectile, launch it at a more modest velocity, and let the bullet aerodynamics provide the downrange ballistics. This is the common thread binding the new efficient cartridges listed above. The benefits to the shooter are actually better downrange ballistics despite the lower muzzle velocities, less recoil, and longer barrel life.

The old-school approach to cartridge design—large case and going fast—resulted in very heavy charges of slow propellants. In general, with this approach the propellant is not completely burned by the time the projectile exits the barrel. The result is faster barrel wear, severe muzzle blast, and heavy recoil.

To take a concrete example, let’s compare the ballistics of the .264 Win. Mag. with a 140-grain flat-base projectile to the 6.5 Creedmoor with a 143-grain boattail projectile (see charts above). You might cry foul, because those are two very different bullets, but hear me out. The .264 Win. Mag., because of the 1:9-inch twist it was designed around, can’t adequately stabilize more bullet than a 140-grain flat-base Spitzer. Even adding a boattail would result in a marginally stable projectile that would likely have stability problems on a cold day. Not so with the Creedmoor, because of the 1:8-inch twist.

As you can see, the 6.5 Creedmoor quickly makes up the 330 fps deficit in muzzle velocity it has with the .264 Win. Mag. There is also very little difference in the trajectory of each cartridge despite the 330 fps difference. If the graphs were taken to greater distances, the 6.5 Creedmoor would leave the .264 in the dust. This is the value of emphasizing the projectile design as part of the cartridge design. The 6.5 Creedmoor will, for all practical purposes, perform with the .264 Win. Mag. It does so with less recoil, 15 to 20 grains less propellant, and about three times the barrel life.

The approach to designing an inherently accurate cartridge has also changed. The traditional way to get an accurate cartridge-chamber combination was to have no lead or throat in the chamber, the bullet seated right up to or actually into the rifling, a tight chamber-to-­cartridge neck fit, and a sharp and concentric crown on the muzzle. Lead angles tended to be a little random, from 1.5 degrees to up to 15 degrees. Little attention was paid to the cartridge shape or throat design as it pertained to the projectile. Throat or lead diameters were allowed to be anywhere from .003 to .007 inch larger than projectile diameter.

These types of lead diameters allow a lot of room for a projectile to wander around while trying to get seated in the rifling. This can lead to the projectile entering the rifling at an angle relative to the axis of the bore. This angle is called principle axis tilt (PAT). It is the angle between the line of flight of the projectile and the axis through the center of the projectile from the rear to the point. PAT defines the angle of attack or, put another way, the angle the bullet is flying at relative to the line of flight. The bigger this angle, the less accurate the bullet will shoot.

Ballisticians have gained better insight into projectile dynamics and how they affect performance. Along with the quality of the construction of the projectile, jacket concentricity, and consistent core swaging, the PAT of the projectile has to be controlled and minimized to obtain top accuracy. If the projectile enters the rifling at an angle, it will travel down the barrel at that angle, and it will leave the muzzle at that angle. The projectile will be starting out behind the curve for best accuracy before it ever leaves the gun.

The quest to improve accuracy and limit PAT is another reason we see cases with minimal body taper and sharper 30- to 35-degree shoulders. These two things aid in forcing the cartridge case to align itself better with the axis of the barrel. The minimal taper and sharper shoulder don’t allow the cartridge to lie off center in the chamber as much as a more tapered, shallow-shoulder-angle case. This in turn further helps to limit and control the PAT of the projectile.

So, have these changes in design approach and philosophy really brought shooters better-performing, more-shootable cartridges? Another look at cartridge specs below provides the answer. The .224 Valkyrie does not match the .22/250 with the heaviest projectiles that the .22/250 can shoot, but the Valkyrie burns about 8 to 10 grains less powder in the process. The .224 Valkyrie can fire the heaviest projectiles made in .224-inch caliber. Not so the .22/250 without a rebarrel and a faster twist. For long-range shooting, the .22/250 can’t touch the Valkyrie. Likewise, the 6mm Creedmoor can run away and hide from a .243 Winchester. The .300 WSM produces the same performance as the .300 Win. Mag. but does it with 6 to 8 grains less propellant. In every one of the comparisons, the newer cartridge will have longer barrel life, less recoil, and less muzzle blast because of its more efficient design. Lastly, at this point there is little argument about the outstanding accuracy of any of these new cartridges. Shooters have never had it so good. 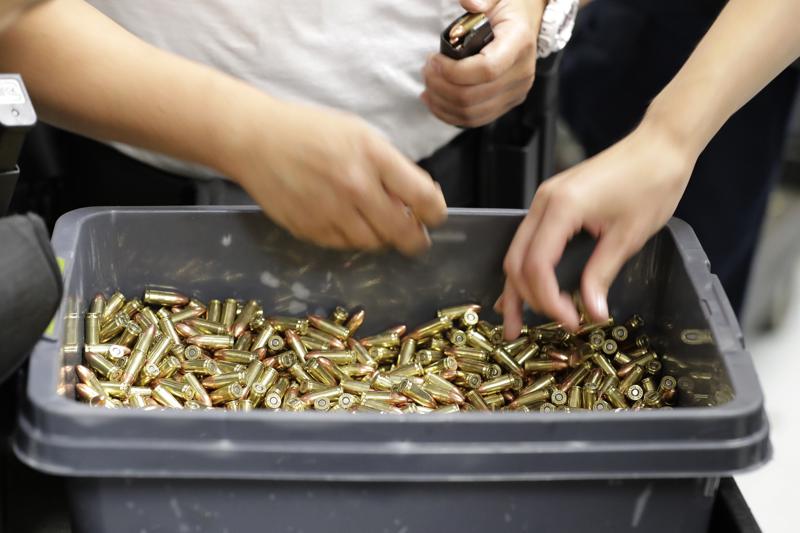 SEATTLE (AP) — The COVID-19 pandemic, coupled with record sales of firearms, has fueled a shortage of ammunition in the United States that’s impacting law enforcement agencies, people seeking personal protection, recreational shooters and hunters — and could deny new gun owners the practice they need to handle their weapons safely.

Manufacturers say they’re producing as much ammunition as they can, but many gun store shelves are empty and prices keep rising. Ammunition imports are way up, but at least one U.S. manufacturer is exporting ammo. All while the pandemic, social unrest and a rise in violent crime have prompted millions to buy guns for protection or to take up shooting for sport.

“We have had a number of firearms instructors cancel their registration to our courses because their agency was short on ammo or they were unable to find ammo to purchase,” said Jason Wuestenberg, executive director of the National Law Enforcement Firearms Instructors Association.

As the pandemic raced across the country in early 2020, the resulting lockdown orders and cutbacks on police response sowed safety fears, creating an “overwhelming demand” for both guns and ammo, Oliva said. Factories continued to produce ammunition, but sales far exceeded the amount that could be shipped, he said.

“Where there is an increased sense of instability, fear and insecurity, more people will purchase guns,” said Ari Freilich of the Gifford Law Center to Prevent Gun Violence.

“Early on in the pandemic, we saw people hoarding toilet paper, disinfectant, and now it’s ammo,” he said.

Wustenberg emphasized the danger in first-time gun buyers not being able to practice using their new weapons.

Going to the gun range entails more than trying to hit a target, he said. It’s where shooters learn fundamental skills like always pointing their guns in a safe direction and keeping their fingers off the trigger until they’re ready to fire.

“It’s that old adage: Just because you buy a guitar doesn’t mean you’re a guitar player,” Wustenberg said. “Some have the misconception of ‘I shot this target 5 yards away and did just fine so I’m OK if someone breaks into my house.’ You’ve got to go out and practice with it.”

The U.S. military is not affected by the shortage because the Army produces ammunition for all branches of the military at six sites across the country, according to Justine Barati, spokesperson for the U.S. Army Joint Munitions Command.

The U.S. shooting team, which won four medals at the Tokyo Olympics, also had the ammo needed to train thanks to a commitment from sponsors, but membership and junior programs have struggled, said Matt Suggs, chief executive officer for USA Shooting.

The U.S. Biathlon team, training for the 2022 Winter Olympics in February, also has been supplied with ammo from its sponsor, Lapua, made in Finland. But local clubs face shortages, said Max Cobb, president of U.S. Biathlon Association.

Jason Vanderbrink, a vice president at Vista Outdoor, which owns the Federal, CCI, Speer and Remington ammunition brands, said the companies are shipping ammo as fast as they can make it.

“I’m tired of reading the misinformation on the internet right now about us not trying to service the demand that we’re experiencing,” he said in a YouTube video produced for customers aimed at quashing speculation suggesting otherwise.

Imports of ammunition from Russia, South Korea, the European Union and others were up 225% over the past two years, according to an analysis by Panjiva Inc., which independently tracks global trade. But at least some U.S.-made ammo is heading out of the country.

Winchester has logged 107 shipments since January 2020, according to Panjiva. Most went to Australia to fulfill a contract Winchester secured with NIOA, the country’s largest small-arms supplier. Nigel Everingham, NIOA’s chief operating officer, said he could not disclose how much ammo Winchester is supplying.

A few shipments also went to Belgium and Israel.

Meanwhile, most of the ammunition pictured on the website for Champion’s Choice, a gun store in LaVergne, Tennessee, is listed as “out of stock.”

“We keep ammo on order but we’re not sure when it’s going to come available, “sales manager Kyle Hudgens said. “It does put us in a bad position with our customers. They’re asking what the deal is.”

And Bryan Lookabaugh at Renton Fish & Game’s skeet and trap range in Renton, Washington — where shooters try to hit discs flying at 35 to 70 mph — said the limited availability means fewer people show up for shooting practice and some couldn’t participate in a recent competition.

“We have not had a full shipment in a year,” he said.

“I’ve never seen anything like it before,” Hendrix said. “There’s stuff we can’t get, especially rifle ammo. If you don’t have ammo for your customers, there’s no point in having your doors open.”