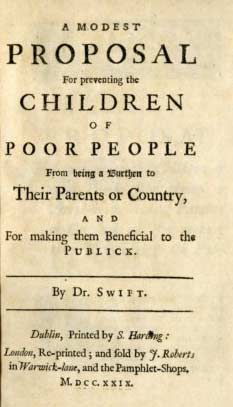 Jonathan Swift’s “A Modest Proposal” was a seminal piece of literary satire.

In 1729, the esteemed satirist Jonathan Swift anonymously published “A Modest Proposal For preventing the Children of Poor People From being a Burthen to Their Parents or Country, and For making them Beneficial to the Publick.” History has come to refer to this seminal work of satire as simply “A Modest Proposal.” His suggestion in the face of soul-crushing poverty in Ireland was that Irish parents sell their children to the rich for consumption as food. Dissecting “A Modest Proposal” was the only exercise in classical literature I undertook in high school that I truly enjoyed.

Swift penned this work in the face of cataclysmic destitution. Here’s an excerpt: “A young healthy child well nursed, is, at a year old, a most delicious nourishing and wholesome food, whether stewed, roasted, baked, or boiled; and I make no doubt that it will equally serve in a fricassee, or a ragout.”

This specific literary technique is a form of paralipsis. In crafting such an extreme example, Swift made the point that the nation’s priorities were badly askew. He used this essay to raise awareness of something institutionally rotten in the English culture of the era.

There is something comparably putrid about our own culture today. A shockingly large swath of our population has raised corporate self-flagellation to an art form. It’s not that our countrymen simply wish to enact change via the democratic process. That would be great. These woke Americans hate America like ISIS or al Qaeda might. They couch their grievances in the guise of social justice. Cops and traditional family values are the perennial targets.

Here’s a handy dose of reality. You may think we’re bad, but the entire planet is unimaginably worse. Yes, we’ve had our warts. We all agree that slavery was repugnant, and ours is hardly a colorblind America. However, we have made immense strides.

The stratification of wealth is as old as humanity. No amount of social engineering will ever change that. Social justice warriors are rendered combat ineffective over pronoun usage. We medicate our dogs for depression, while Ukrainians cower in basements hoping they won’t be crushed to death. It’s simply surreal.

Antifa presumes that there is some utopian ideal someplace where all men/women/undecided really are treated equally. That utopia simply doesn’t exist. ISIS straps gay people to chairs and throws them off of tall buildings. Scandinavian cities are racially segregated on a scale unimaginable in the U.S. The first woman to receive a driver’s license in Saudi Arabia did so in 2018. Thanks to their draconian hijab laws, Afghan women might now live their entire lives without feeling the sun on their skin. And the problem is America?

There is a reason the entire planet seems hellbent to come here. Compared to the U.S., the rest of the world simply sucks. It’s time modern Americans started showing a little more gratitude and a little less ill-informed indignation. Get on your feet, you losers. Protest injustice with my blessing. However, protest the problem, not the country that guarantees your right to protest. Photo by Keith Allison via Unsplash

So here’s my proposal: Everyone protesting traditional American values should be bused to the southern border for a one-for-one swap. For every quasi-literate immigrant we allow into the country we supply one discontented social justice warrior in exchange. The militant progressives can then caravan down to Guatemala, while the dispossessed Guatemalans get to stay here. Now, I admit that Berkeley may find itself desperately short on sociology professors. However, that’s a chance I’m willing to take.

In return, we get a whole pile of poorly-educated people who don’t speak English. However, if we explain that assimilation into American culture is a prerequisite for staying here, they would likely be jabbering away in English toot sweet. They would also probably work their butts off so their kids and grandkids can eventually become doctors and lawyers as well. At least that’s the way it has worked in the past. There’s a reason everybody on the planet wants to come here.
Photo by Charlota Blunarova via Unsplash

I grow so terribly weary of the incessant prattling about how ghastly it is here. Stop your whining. If you hate America so badly, the southern border appears to be wide open. Don’t let the screen door hit you in the butt.

Institutional abuse, racism, and corruption in America pale in comparison to places like Mexico, Colombia, Afghanistan, and the Sudan. Those griping the loudest have simply never been anyplace else. Plop the liberal arts faculty from Oberlin College down in Yemen and see how many are still breathing 30 days later.

Too many good Americans died to secure our freedoms, some of whom were friends of mine, to tolerate this. I tire of listening to these petulant toddlers scream. If you think capitalism is the problem and socialism is the solution then climb aboard, next stop … Venezuela. I’ll cover your ticket.