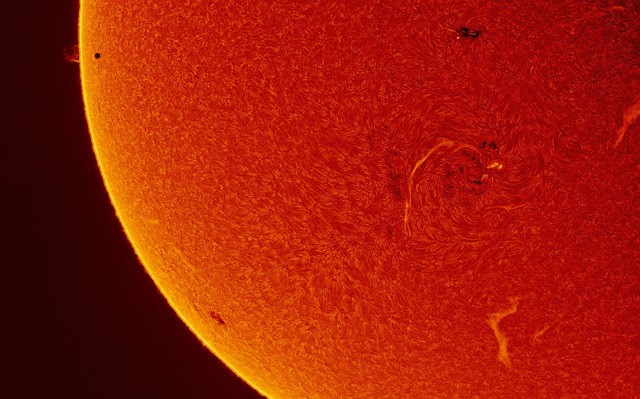 The small black dot in the upper left corner is the planet Mercury passing in front of the sun. Seems kinda small doesn’t it? That’s not the only perspective here. In this picture, the sun is 36 million miles behind Mercury. Strangely enough Duke’s first handgun was a French Model 1935A 7.65
Long given to him by his father circa 1961.

Recently a fellow asked me when I became interested in guns. My reply was … I was born with it. My older sister chimed in and said by age three the first thing I did every morning was buckle on my gun belt with its toy cap gun. This wasn’t TV influence; we didn’t have one.

From the beginning, I’ve hand jotted a list of every firearm I’ve owned. So, I have a timeline of handguns purchased, traded for or otherwise acquired. About 1961 Dad came home with my first real handgun. Neither of us had any idea what it actually was. I was allowed to keep it in my room but not show it off to other kids or take it out of the house. Dad felt safe because he somehow knew ammunition for it wasn’t readily available.

Following my inborn interest in cowboy handguns I received for my 17th birthday in 1966 a Colt Frontier Scout .22 LR. It was a short-lived treasure. The little single action was enjoyable to shoot, but hitting anything with it past about 10 yards was a matter of chance. In frustration I traded it back to the store with a few bucks extra for a Ruger Mark I .22LR. With its 67/8″ barrel and target sights, I could at last direct bullets to a target. I became enamored with bullseye shooting, which led to my next handgun milestone.

That same summer and by shenanigans too lengthy to detail here, I raised enough cash to buy a slightly used Smith & Wesson K38 with a 6″ barrel. Cost: $50. However, factory ammo cost was a shock to my system. This led to me soon becoming a handloader. The next year passed with no milestones, but 1968 was a banner year. During the winter a retiring West Virginia’s Mingo County deputy sheriff had his S&W pre-Model 29 .44 Magnum for sale. He was asking $100. My soon-to-come income tax refund was nearly this much, so Dad floated me a loan to nab the big .44. I kept it 42 years; packing it up and down Montana mountains until deciding to let it go when I got too old for such pursuits.

By June 1968, my first year of college was finished. I was making $1.60 an hour hustling freight on the docks of a trucking company. A friend, the aforementioned chief of police’s son, also worked there. One day he pointed out a truck driver and said, “He owns one of those SA Colt .45s you’re always talking about.” Long story made short: I aggravated the truck driver till he sold me the Colt. Cost again was $100. The .45 was of the second generation made in 1964.

A few evenings later Dad came home from work, reached into his hip pocket and handed me a WWII Remington Rand 1911A1 .45 Auto. He said, “I took this for a bill today. Do you want it?” I did! In just a few days, two .45s had been added to my growing assortment of handguns.

By the start of West Virginia’s Marshall University’s 1968 fall semester, I had saved enough money to buy reloading dies and bullet molds for my new handguns. After some shooting, I was happy with them except for the Remington Rand. I couldn’t have hit one of John Taffin’s hats with it at 25 yards. I sold it for $35, redirecting the cash to powder and primers.

Before classes started in September 1968, I conned a friend to share expenses for a camping trip to Montana. My idea was to visit the then-named Custer Battlefield. I fell in love with Montana and have been a full time Montana resident for nearly 50 years. In that half century I’ve owned hundreds of handguns including about 100 Colt SAAs, a passel of U.S. Model 1911A1s and even another French Model 1935A.

Still, the excitement of those first handgun milestones remains most vivid in my mind.

THE LAWS OF ULTIMATE REALITY
& Law of Mechanical Repair  After your hands become coated with grease, your nose will begin to itch and you’ll have to pee.
& Law of Gravity  Any tool, when dropped, will roll to the least accessible corner.
& Law of Probability  The probability of being watched is directly proportional to the stupidity of your act.
& Law of Random Numbers  If you dial a wrong number, you never get a busy signal and someone always answers.
& Law of the Alibi  If you tell the boss you were late for work because you had a flat tire, the very next morning you will have a flat tire.
& Variation Law  If you change lines (or traffic lanes), the one you were in will always move faster than the one you are in now.
& Law of the Bath  When the body is fully immersed in water, the telephone rings.
& Law of Close Encounters The probability of meeting someone you know increases dramatically when you are with someone you don’t want to be seen with.
& Law of the Result  When you try to prove to someone that a machine won’t work, it will.
& Law of Biomechanics  The severity of the itch is inversely proportional to the reach.
& Law of the Theater  At any event, the people whose seats are furthest from the aisle arrive last.
& The Starbucks Law  As soon as you sit down to a cup of hot coffee, your boss will ask you to do something which will last until the coffee is cold.
& Murphy’s Law of Lockers  If there are only two people in a locker room, they will have adjacent lockers.
& Law of Physical Surfaces  The chances of an open-faced jelly sandwich landing face down on a floor covering are directly correlated to the newness and cost of the carpet/rug.
& Law of Logical Argument Anything is possible if you don’t know what you are talking about.
& Brown’s Law of Physical Appearance If the shoe fits, it’s ugly.
& Oliver’s Law of Public Speaking A closed mouth gathers no feet.
& Wilson’s Law of Commercial Marketing Strategy  As soon as you find a product that you really like, they will stop making it.
& Doctors’ Law If you don’t feel well, make an appointment to go to the doctor, by the time you get there you’ll feel better. Don’t make an appointment and you’ll stay sick.