Rich Howell shows off a California-compliant rifle.  Proof that Californians will not be denied their 2A rights. (Photo: Reno Gazette Journal).

Necessity is the mother of invention, right?  No one knows that better than Californians.
Over the years the state has passed law after law infringing on their right to keep and bear arms.  But with every turn of the screw, Californians have fought back, finding new workarounds that allow them to maintain some semblance of their 2A rights while vexing anti-gunners in the process.
With 2018 around the corner.  Here are some examples of what Californians are doing to stick it to their overlords in Sacramento.
Law: No more Online Ammo Sales (2018), Background Checks for All Ammo Sales (2019)
Workaround: Buy ammo out of state.  Simple as that.  For Californians who live along border states like Arizona, Nevada, and Oregon it’ll be relatively easy.  For everyone else, it might be a long car ride.  Still, go for a road trip.  Buy in bulk.  And be done with it. Don’t give them the satisfaction or the tax revenue from purchasing from California vendors. Sorry California ammo sellers, you’ll have to take one for the team on this.
Law: Bullet Button Ban (2018)
Workaround: The Bullet Button was a workaround against the state’s initial ban on black rifles with detachable magazines, telescoping stocks, flash hiders, and pistol grips. It’s a simple device that secures a magazine to a rifle so that it cannot detach without the use of a tool (or tip of a bullet) to disengage it.
Lawmakers caught on to the Bullet Button and banned it.  As part of that legislation, they are requiring current owners with a bullet button on their rifle to register it with the state.  Heck no!  To escape this nonsense, just remove the Bullet Button and add a Patriot Pin.
A Patriot Pin circumvents the law because with the device installed a user cannot detach a magazine without opening the action.  The beauty of the Patriot Pin is that it’s a rapid way to open the action and, thus, release the mag.  Basically, with the push of a button.

Law: Black Rifle Ban
Workaround: Suppose you don’t want to go the route of the Patriot Pin or the Bullet Button. There is a way to have a rifle with a detachable magazine.  The tradeoff is you can’t have any features.  No collapsing stock, no flash hider, no pistol grip.
The solution is a featureless rifle.  An AR with a funky-looking non-pistol grip, a fixed stock and no flash hider.  They’re ugly.  Hideous compared to standard ARs.  But they’ll get the job done.  What’s more, it is yet another way to flip off the powers that be.
Law: Ban on Carrying Long Guns in Unincorporated Areas (2018)
Workaround: While the state legislature passed this law, the decision on whether it applies to various areas is actually up to the local counties.  Convince the board members in your county not to enact the new rule and it won’t take effect.  Easier said than done if you live outside of counties like Los Angeles or San Diego.  Nevertheless, give it a go.

Rich Howell (see video below) made an astute observation in an interview with the Reno Gazette-Journal.
“They can pass all the laws they want, and I can guarantee you we are going to find a way around them,” said Howell, the general manager of Olde West Gun & Loan in Redding, CA.
Ain’t that the truth.

Now I am not disrespecting the Real Soldiers in the Green Machine, okay! But really!?!

Sergeant Major of the Army Daniel Dailey Tweeted out a picture of himself yesterday while he was attending the Army-Navy football game wearing the “Pinks & Greens”. In another Tweet, he credits the uniform for contributing to the win.
View image on Twitter 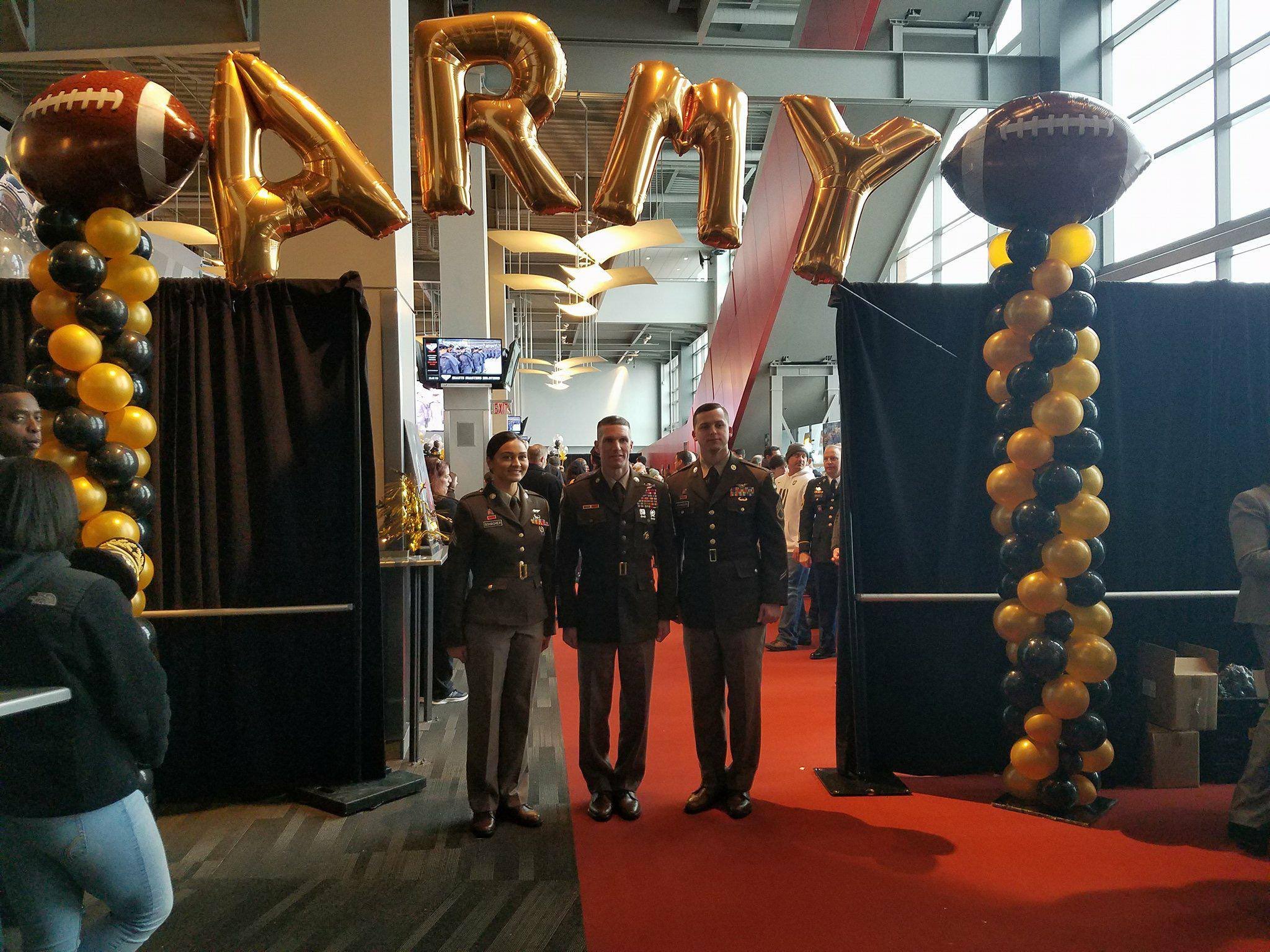 And the streak continues!! Pinks & Greens gave us good fortune at the #ArmyVsNavy snow game! It powered us to VICTORY!!! #ArmyStrong @USArmy

From the Army Times;

The Army is working on a revival of the iconic uniform, and the prototypes first made their debut on the conference floor of the annual AUSA meeting in Washington, D.C. Dailey and the prototype models have since made the rounds in the uniform, including to a reception on Capitol Hill.
Saturday was the first time Dailey had been spotted in the uniform.

So, I guess the fix is in. You can’t avoid the fashionista train. (1) Isn’t it weird that in America, our flag and our culture offend so many people, but our benefits don’t?
(2) How can the federal government ask U.S. citizens to pay back student loans when illegal aliens are receiving a free education?
(3) Only in America are legal citizens labeled “racists” and “Nazis,” but illegal aliens are called “Dreamers.”
(4) Liberals say, “If confiscating all guns saves just one life, it’s worth it.” Well, then, if
deporting all illegals saves just one life, wouldn’t that be worth it?
(5) I can’t quite figure out how you can proudly wave the flag of another country, but consider it punishment to be sent back there.
(6) The Constitution: It doesn’t need to be rewritten, it needs to be reread.
(7) William F. Buckley said: “Liberals claim to want to give a hearing to other points of view, and are then shocked and offended when they discover there are other points of view.”
(8) Joseph Sobran said: ‘Need’ now means wanting someone else’s money. ‘Greed’ means wanting to keep your own. ‘Compassion’ is when a politician arranges the transfer.”
(9) Florida has had 119 hurricanes since 1850, but some people still insist the last one was due to climate change.

The Bureau of Alcohol, Tobacco, Firearms, and Explosives is currently accepting public comment on their plans for backdoor bump stock gun control.

On December 22 Breitbart News reported a Department of Justice announcement that the ATF would be seeking to redefine the term “machinegun,” so as to include aftermarket devices that do not convert semiautomatic firearms into fully automatic weapons. As of now, only mechanisms/alterations that truly convert a semi-action into a full-action are governed by the National Firearms Act (1934). The efforts to redefine the term “machinegun” center on new controls for devices that merely “mimic” full auto fire.
The pertinent portion of the DOJ’s announcement:

Those engaged in the business of manufacturing, importing, or dealing in NFA firearms must be registered with the Attorney General. 26 U.S.C. 5801, 5802. When the NFA was enacted in 1934, only a handful of firearms qualified as machineguns, such as the Thompson submachine gun. Over time, however, as firearms technologies have advanced, manufacturers and the public have attempted to develop firearms, triggers, and other devices that permit shooters to use semiautomatic rifles to replicate automatic fire without converting these rifles into “machineguns” within the meaning of the statute. Consequently, questions have arisen about whether these types of devices should be classified as machineguns (or machinegun conversion devices) pursuant to section 5845(b). See, e.g., Internal Revenue Ruling 55-528 (1955) (considering whether types of “Gatling Guns” constitute machineguns); ATF Ruling 2006-2 (examining a firearms accessory device that, when activated by a single pull of the trigger, initiated an automatic firing cycle that continued until release).
ATF has issued a number of private letters to individuals and manufacturers who voluntarily submitted such devices for classification under the NFA and GCA. In addition, ATF has promulgated a regulation that defines “machinegun,” See 28 CFR 478.11, but that regulation mirrors the statutory language of the NFA and GCA and provides no further interpretation.

The ATF’s intention to redefine the term “machinegun” was published in the Federal Register on December 26, 2017. The agency is accepting public comments on their plans for backdoor gun control from now until late January.

Their announcement says, “Written comments must be postmarked and electronic comments must be submitted on or before January 25, 2018. Commenters should be aware that the electronic Federal Docket Management System will not accept comments after Midnight Eastern Standard Time on the last day of the comment period.”
Bump stocks were evaluated by Barack Obama’s ATF, recognized as accessories rather than conversion devices, and approved for sale in 2010. The ATF/DOJ push for redefining the term “machinegun” would essentially eliminate any difference between accessories and conversion devices, treating both categories as a means of converting semiautomatics into full autos. This, in turn, would bring bump stocks under the auspices of the National Firearms Act (1934), requiring that the accessories be registered with the government and that owners of bump stocks be fingerprinted, photographed, and required to undergo a background check.
AWR Hawkins is an award-winning Second Amendment columnist for Breitbart News, the host of the Breitbart podcast Bullets, and the writer/curator of Down Range with AWR Hawkins, a weekly newsletter focused on all things Second Amendment, also for Breitbart News. He is the political analyst for Armed American Radio. Follow him on Twitter: @AWRHawkins.

Arkansas Gov. Asa Hutchinson (R) sent a letter to Arkansas State Police (ASP) directing them to recognize that the open carry of handguns is “protected and allowed.”

He addressed his letter to ASP director Col. Bill Bryant and said Act 746 of 2013 allows a “person to open carry a handgun so long as there is no intent to unlawfully employ the handgun.”
Hutchinson added:

He asked Bryant to share the directive with “all appropriate ASP personnel” and “monitor all agency materials for consistency.”
Arkansas Matters reports that Hutchinson’s directive “carries no force of law” but “will have the effect of guiding state troopers” as they interact with armed law-abiding citizens.
ASP director Bryant responded to Hutchinson’s letter by issuing a memo to troop commanders, reminding them that “openly carrying a handgun does not alone provide probable cause for arrest.”
AWR Hawkins is an award-winning Second Amendment columnist for Breitbart News, the host of the Breitbart podcast Bullets, and the writer/curator of Down Range with AWR Hawkins, a weekly newsletter focused on all things Second Amendment, also for Breitbart News. He is the political analyst for Armed American Radio. Follow him on Twitter: @AWRHawkins. Reach him directly at awrhawkins@breitbart.com.