A massive Victory for all mankind! Grumpy A federal appeals court this week took a look at the 1968 law that barred adults under age 21 from purchasing handguns and found it did not square against the right to keep and bear arms.

In the appeal of Tanner Hirchfeld and Natalia Marshall against federal gun regulators, a divided 2-1 panel of the U.S. 4th Circuit decided Tuesday that the provisions blocking otherwise lawful handgun sales to some adults due to their age go too far.

“Looking through the historical lens to the text and structure of the Constitution reveals that 18-to-20-year olds have Second Amendment rights,” U.S. Circuit Court Judge Julius Ness Richardson, a Trump appointee, said for the majority which included Judge G. Steven Agee, an appointee of President George W. Bush.

“Virtually every other Constitutional right applies whatever the age, and the Second Amendment is no different,” said Richardson. “The militia laws in force at the time of ratification uniformly required those 18 and older to join the militia and bring their own arms. While some historical restrictions existed, none supported finding that 18-year-olds lack rights under the Second Amendment.”

The panel majority went on to point out that, even pre-dating the ratification of the U.S. Constitution and the Second Amendment within, 11 of the 13 original colonies had militia laws with an age threshold of 16 years to bear arms while the two outliers, Delaware and Pennsylvania, recognized age 18.

But while Congress—or judges—may have struck a different balance long after ratification, that role is foreclosed to us by the balance that the Founders chose. We cannot now second-guess or undermine their choice. History makes clear that 18- to 20-year-olds were understood to fall under the Second Amendment’s protections. Those over 18 were universally required to be part of the militia near the ratification, proving that they were considered part of “the people” who enjoyed Second Amendment rights, and most other constitutional rights apply to this age group.

“Today, my good colleagues in the majority break new ground by invalidating a modest and long-established effort to control gun violence,” said Wynn. “The majority holds that Congress may not enact a law making 21 the minimum age to purchase handguns from federally licensed gun dealers. But the majority’s decision to grant the gun lobby a victory in a fight it lost on Capitol Hill more than fifty years ago is not compelled by law.”

The opinion, in an appeal from a West Virginia district court, only applies to the 4th Circuit, which covers Maryland, the Virginias, and the Carolinas. Signed on to support the law are a variety of well-funded anti-gun groups including Brady, Everytown, and Giffords. It will likely be appealed to the full 4th Circuit, and from there, regardless of the outcome, to the Supreme Court.

The case is Hirchfeld v. ATF. 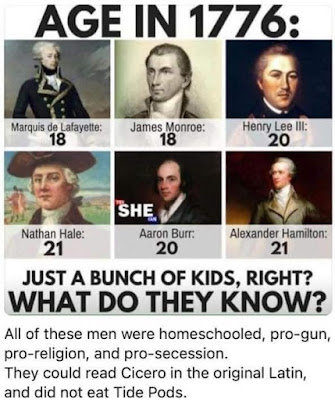 This is a Great Series about The Second American President John Adams. It is worth both the time and coin to watch this Movie in my humble opinion. Grumpy